A LIFE IN THE THEATER: Alan Poindexter, in his element 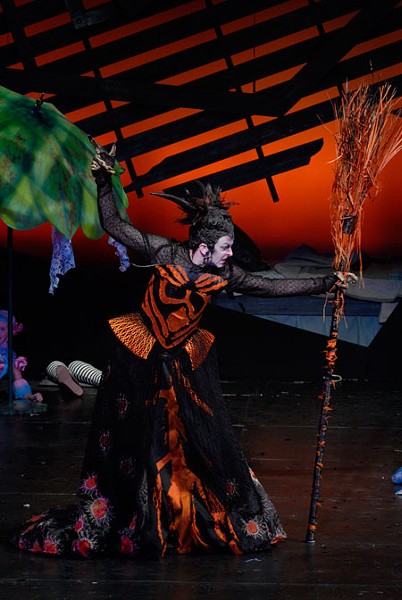 ALL DRESSED UP: Poindexter as the Wicked Witch in The Wizard

We weren't at all alike. We came from different regions and different generations. Yet somehow, Alan Poindexter (1965-2013) and I arrived on the Charlotte theater scene at almost the exact same moment. Alan's emergence was inevitable. He was brilliant, original, daring, funny and iconoclastic — with an onstage presence and charisma that I'd never seen, before or since, from a college student.

By comparison, my impact was peripheral and accidental. An alternative newsweekly over in Atlanta decided to try an offshoot in Charlotte about a year after I landed here, interviewing applicants while I was rehearsing my role as Motel in the Rock Hill Little Theatre production of Fiddler on the Roof. Ideal qualifications for a theater critic! At least, Suzanne Gulley, first editor of the new Creative Loafing, thought so.

When we said "Hello, Charlotte!" on our first cover in 1987, we had some iconoclastic itches of our own as we sallied forth to cover Banktown. But a primary reason I was the first to review Alan in the local media was that I was just damn ignorant of how things were done around here. Back when Charlotte Rep only performed in the summertime, keeping a fledgling theater column going every week meant hitting the highway to cover Little Theatre of Gastonia and Old Courthouse Theatre in Concord. It meant hunting down every guerilla group that invaded an empty Charlotte warehouse, loft or storefront.

I didn't realize I was breaking any rules by covering UNC Charlotte. And notwithstanding all the college and off-Broadway productions I'd ingested during my undergrad years in the Big Apple, I was amazed by what I found in 49erland.

Here was a scintillating Tartuffe featuring an impudent Barbi VanSchaick and a repellent Robert Croghan, followed by an edgy, audacious production of The Balcony with the gaunt, preternaturally powerful Poindexter. When Alan made his entrance in a subsequent production of Ruffian on the Stair, somewhere between 10 and 20 years too young for his role, a single word popped into my mind, crystallizing the impression he made: Bogart.

Steve Umberger, Lon Bumgarner, Mark Woods and Keith Martin were the great lights in the Charlotte theater firmament when Poindexter made his first post-collegiate, off-campus foray in 1988, featured with VanSchaick in Sexual Perversity in Chicago, the first Innovative Theatre production. The company was George Brown's back then, but the elder Brown's mission embraced bringing live theater to a youth audience — drawn by a youthful talent pool spearheaded by Poindexter, and staged at youth-oriented venues.

So Sexual Perversity was staged at the old Pterodactyl Club off Morehead Street, Tracers at the Tremont Music Hall, and Brown's chef-d'oeuvre as director, The Illuminati, circling back to the little black-box theater at UNCC. The Illuminati was the 1990 Show of the Year in CL's Charlotte Theater Awards, and Brown shared Theaterperson of the Year honors with Umberger.

But in retrospect, all of Innovative's early successes served as a launchpad for the wunderkind's stunning emergence in 1991. Alan was the star in two landmark Innovative gender-benders at the Pterodactyl that year, Psycho Beach Party and Vampire Lesbians of Sodom; he made his Charlotte Rep debut in Blackout Sketches; he made his Children's Theatre debut, directing the Teen Ensemble's I Never Saw Another Butterfly; and in his first directorial effort with Innovative, he piloted CL's Best Comedy of the year, Ionesco's The Chairs.

An urban legend was born. If CL was synonymous with Charlotte counterculture in print, then Alan Poindexter was its personification in the performing arts. Make no mistake, Alan had a totally immersive concept of the theatrical experience, and to fulfill his vision, he relied on a trusted corps of actors and designers. Onstage, it was usually VanSchaick and Mark Sutton in the leading roles. Costumes and sets were usually by Johann Stegmeir, whom Alan had met in his college days, and choreography — yes, choreography dammit, whether it was a musical or not! — was by Delia Neil. And how could Neil's choreography not chime perfectly with the overall concept when Alan himself was the sound designer?

His impact was huge. So was his following, and the question among devoted Charlotte theatergoers wasn't whether you'd seen the wunderkind's latest, but what would he do next? At the tender age of 12, my daughter Ilana was with me at every possible Poindexter exploit during his breakout year, including the Pterodactyl saturnalia.

"He had such an impact on everyone who knew him," she posted on Facebook upon learning of Alan's death. "My childhood was shaped by the shows I saw him in. To say he will be missed is a gross understatement."

Multiply that by the thousands who saw the Children's Theatre productions of The Ice Wolf, Tales of a Fourth Grade Nothing and The Lion, the Witch, and the Wardrobe. Poindexter directed all of these long before he became artistic director at the old fantasy palace in 2002 and inspired so many more thousands during his decade there, leading Children's Theatre into a new millennium with all the wonderful facilities, educational programming and fabulous theater spectacles at ImaginOn, the crown of his legacy. The effort involved in researching and shepherding this pioneering facility was epic.

Sweating the details was simply Alan being Alan. Before he was 29, before the coast-to-coast headlines as he reached the pinnacle of his acting career with his Charlotte Rep mainstage debut as Prior Walter in Angels in America, Alan was the first — and still the only — theater artist to win all of CL's highest individual awards: Actor of the Year (1991), Director of the Year (1992, 1994) and Theaterperson of the Year (1993).

Over the next 18 years, he would take Director of the Year honors (1996, 2007, 2009) and Theaterperson of the Year (1996, 2005, 2007) three more times. As he performed less frequently onstage — and in less kinky and controversial circumstances — we began to take Alan, his immense talents and his unparalleled influence for granted. The megahits still demanded attention, including such ImaginAlan spectaculars as Disney's Beauty and the Beast, The Wizard of Oz, Peter Pan, Lyle the Crocodile and the mind-blowing masterwork that opened his new fantasy playground, the second coming of The Lion, the Witch, and the Wardrobe.

Yet we no longer pinched ourselves when we realized that such a marvel was in our midst. We stopped fretting that the sheer weight of his gifts would land him in Hollywood or New York.

I interviewed Alan on numerous occasions during his career, usually when he was at a crossroads — cast in Angels, hired as the Children's Theatre AD, or returning to the stage in The Wizard after a long hiatus, his final cross-dressing exploit as the Wicked Witch. I even learned what it was like to work with him in 1996 when I was cast as Gollum and one-third of the dragon Smaug in The Hobbit. But in spite of his talent, his passion, his roller coaster temperament and his all-out purposefulness, I don't think Alan quite grasped the magnitude of his following, his influence or how deeply he was loved and revered.

But I did ask him, on the threshold of Angels in 1995, whether he might wake up one day and realize that staying in Charlotte was an insane self-sacrifice.

"No," he answered. "Because it's possible to do here what it's not possible to do, let's just say, in New York. And I get that all the time: 'Why the hell aren't you in New York?' Well, fuck! If I go to New York, there are 300 me's standing on the street corner up there. What's the point? You know, I have a dream that is different than that. I don't want fame. I don't need to be 'a star.' What I need is to be respected in my field for the work that I do, which is probably harder than being a star."

Job done. You not only won respect here as a theater professional, you earned a solid reputation for Children's Theatre of Charlotte nationwide. Bravo.

And no, my dear Alan, there aren't close to 300 you's in New York. There was only one of you here in Charlotte, and your leaving us at age 47 was way too soon. Your untimely death has sparked an online outpouring of tributes, reminiscences and condolences from the myriad people who worked with you, learned from you and watched your many exemplary performances and productions. As a critic, as a theatergoer and as a parent, I am grieving right along with them.

It has been confirmed on Facebook that a tribute to Alan Poindexter will be held from 7 to 10 p.m. Thursday, Aug. 22, in the McGlohon Theatre at Spirit Square. (Alan would have turned 48 on Aug. 23.) The outpouring of love and support for him has been tremendous; here are but three examples.

"Oh, Alan is still here, finding ways of inspiring people to do what they think they cannot do. I found a message from him on Facebook today — it was dated June 19 — saying he had found the perfect play to get me 'back on the boards.' The last time I saw him was about that time; he was in the hospital, laughing, eating chocolates and giving the nurses hell." — Gina Stewart, Charlotte actress

"Alan had been enjoying himself immensely, working on renovating his apartment: painting, redecorating, etc. He loved his dogs, and we would always stop and chat about their personalities and share a few laughs on the porch." — Barbi VanSchaick, Charlotte actress

"Like everyone else, I was stunned to learn about Alan's passing. Back at UNC Charlotte in the mid-1980s, he was college theater, and since then, he was Charlotte theater. I fondly recall appearing with him in a few plays at UNCC and us sharing an apartment one summer with three other theater majors. Those are potent memories that will never be diminished or forgotten." — Matt Brunson, CL senior editor