The Rebirth of Shalini

No matter where she goes, Shalini keeps ending up back in North Carolina.

Today, she's sitting at a booth at Tip-Top Daily Market on the Plaza in a black dress, sunglasses and a floppy hat, talking about her new Charlotte-based power-pop band, Party Battleship. The group released its first full-length album, Cake + Flames, in March, and has played a handful of gigs since then at Snug Harbor, the Evening Muse, and Hattie's.

Party Battleship soon will be hitting the road for a show in Winston-Salem, where Shalini once lived with her then-husband, the noted North Carolina producer and musician Mitch Easter, during the late '90s and 2000s. The band will return to Charlotte for a July 27 gig at Petra's.

That's a lot of actitivty for a singer who seemed to have fallen off the rock 'n' roll radar during the first Obama administration.

"Things with Mitch kind of fell apart in a weird way," Shalini says, reflecting on her 14-year relationship with the producer of early R.E.M. records, founder and/or reinventer of bands including Let's Active and Big Star, and owner of the legendary Drive-In Studio and the current Fidelitorium. "All of a sudden, all of these young groupies were hanging around. So we were married but he was going out and dating other girls. It just became a weird, bad situation."

That was 2010, and when she'd had enough, Shalini split for the Midwest, licked her wounds and returned to making music. "I was in Chicago for three years and just played solo shows," she says. "I would take my electric guitar and my amp and just go play my songs, but it was kind of weird."

She began a long-distance relationship with another fellow musician from North Carolina, the Charlotte-based multi-instrumentalist John Morris, who'd played in the '90s Charlotte bands Come on Thunderchild, Electrolux, and Snagglepuss.

"Shalini and I had been in remarkably close, but non-intersecting orbits for years," Morris says. "Like a lot of rock 'n' rollists from the eastern seaboard, I've been a longtime fan of her music, and Mitch's projects, and would go to see her and Mitch's outfits when possible."

By 2012, Morris had experienced his own major life change. "I was single, she was single, and we met for an outing with friends in Winston-Salem," he remembers. "Over beers and rock talk, it seemed the years of cross-orbiting had generated a lively chemistry between us. Our shared interests, plus the fact that we dug each other, and she's hilarious, made our team-up inevitable."

The two began traveling between Charlotte and Chicago to see each other. They'd catch shows together in Chicago: Redd Kross, Susannah Hoffs, Bob Dylan. They both were just "generally having fun, something we had been missing for some time," Morris says.

In 2013, Shalini moved to Charlotte, married Morris, and the two began to put together Party Battleship. They brought in Adam Roth on bass and Donnie Merritt on drums.

It's Shalini's third marriage to a fellow band mate. As they say, perhaps the third time is the charm.

But before we get into all that, let's rewind. In 1990, a rising young indie-pop singer and bassist arrived in San Francisco from the college town of Madison, Wisconsin, and eventually married her first husband, the late Scott Miller of the '80s indie-pop band Game Theory and '90s indie band Loud Family. They formed a kick-ass Bay Area band of their own called Vinyl Devotion.

Her name was Shalini Chatterjee; she was half-Indian, half-English, born in Northern India, and raised up in Edinburgh, Scotland, and later Los Angeles. She sang better than early-'90s indie darling Liz Phair and rocked harder than early-'90s indie darling Kim Deal of the Breeders. But Vinyl Devotion never got the attention that Phair, the Breeders or even any of the Olympia, Washington, riot grrrl bands got.

Miller and Easter had been longtime colleagues, Easter having produced Game Theory's mid-'80s classics Real Nighttime and The Big Shot Chronicles. Shalini had gotten to know Easter through Miller, and after she and Miller split, she eventually began dating Easter.

In the late '90s, Shalini moved to Winston-Salem and married Easter. She initally attempted to recreate Vinyl Devotion but decided a new name was in order. Easter's friend and colleague Don Dixon suggested she use her first name as the band's name. And for the next decade, Shalini the band recorded and toured with Shalini as frontwoman and Easter and other members of his extended cast of ex-Let's Active band members backing her. 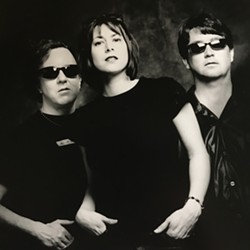 The albums all were remarkable sets of power-pop songs revealing Shalini's deft ability to craft compelling melodies and classic, Cheap Trick-like hard-rock riffs with a band that could play that kind of music in its sleep.

But much of Shalini's time with Easter also involved caring for his dying parents. "I was the primary caretaker," she says. "So there were the surgeries, the chemo, the hospice and then death and obituaries. It was rough. They were my family. I learned a lot about death and dying and all that. It's a whole different tangent. It's something I don't go around talking about much because it makes people uncomfortable."

Meanwhile, she was also making music and performing with Easter. Music was her escape. "I basically spent my 30s in constant crisis mode, but also getting to play a lot," she says. "And it was great that we got to play because it got me away from all that medical stuff all the time."

And then the relationship with Easter dissolved. "You know when rock 'n' roll guys get older but they still want to be young? They'll only date young girls, and that's sort of where Mitch is," Shalini says. "And of course, he's got the big studio, and he hangs out with Mike Mills of R.E.M. And everybody is entranced by his R.E.M. connnections. So there's always some sort of fairydust around Mitch that everybody is entranced with."

When she realized she needed to be out of that world of revolving sycophants, Shalini left for Chicago. "I needed to be somewhere where nobody really cared about Mitch Easter, and in Chicago nobody did," she says. "I mean, people know who he is, but he's not that big of a deal like he is here."

And yet she was pulled back to North Carolina again.

"It's just a much better music scene here," Shalini says. "It's easier to be in a band here and play. And since my music never really took off like some bands, none of my albums ever got, you know, that tailwind of success where you're kind of important and a lot of people will go and see you because you did this certain album. I just never had any of that," she says. "So it's easier to do what I do here, which is play small clubs."

Party Battleship may not be pushing boundaries on their debut album, but the shared vocals among Shalini and John Morris give the album more dynamics than any of her albums under the name Shalini. And there's a chemistry between this couple that also isn't present on her previous albums. As good as those records are, Shalini seems to be making some of her best music now, at 47. And the power-pop world in Charlotte is richer for having Shalini and John Morris' new band Party Battleship setting sail here.