The Raid 2: A gory good time 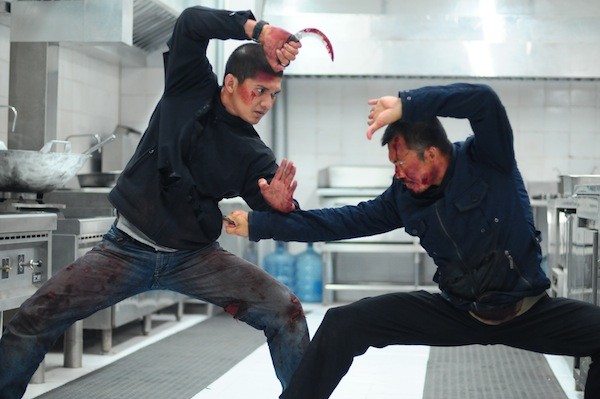 The 2011 Indonesian effort The Raid: Redemption hit the U.S. to much critical acclaim in spring 2012, and as I noted in my review at the time, it "works best as pure, unadulterated, uncut action — it's like cocaine for adrenaline addicts." It also works best when it dispenses with any notions of a complicated plot, deriving its forward trajectory from its bubble gum story about cops forced to fight their way up to a slum building's top floor in order to take out a heinous crime kingpin. It's 100 minutes of all-action all the time, a strategic tack not repeated in The Raid 2.

Rather than require returning hero Rama (Iko Uwais) to spend the entire running time once again laying siege to an underworld-controlled edifice, this new picture adds 50 more minutes to the original's length — that comes out to a generous 2-1/2 hours, folks — in order to make room for a more intricate plot without cutting back on any of the mano-a-mano skirmishes, gun battles and car chases. Not that it's a new plot: Rama must pose as a criminal in order to infiltrate a powerful mob family. That hoary storyline has been used on countless occasions, but that's because it's both irresistible and intense, and The Raid 2 does it justice. Serving jail time as part of his cover, Rama gets close to Ucok (Arifin Putra), the spoiled son of crime lord Bangun (Tio Pakusodewo). Once they're both released, Rama gets accepted by the older man into his gang, but danger is imminent for all concerned when a rival mobster (Alex Abbad) tries to take control of the city's underworld.

In The Raid, the only particularly memorable character aside from Rama is the villainous henchman Mad Dog, played by Yayan Ruhian. Apparently, writer-director Gareth Evans agrees, as Ruhian has been brought back to play another villainous henchman, this one named Prakoso. This time, though, Evans has generously populated his film with numerous characters of note, among them Bangun and his wayward son as well as a pair of deadly assassins known only as Hammer Girl (Julie Estelle) and Baseball Bat Man (Very Tri Yulisman).

It's not hard to guess the weapons of choice of the last-named duo, nor is it difficult to imagine the mess such instruments can make when applied to a human skull. Indeed, The Raid 2 is relentlessly gory, with Evans not always electing to cut away before the scene becomes too gruesome. One bullet piercing a body won't do when 50 more can follow; one thrust of the knife isn't enough when there's time for a dozen more. Yet the violence is so absurd and over-the-top that it's hard to take seriously — if it doesn't quite reach the cartoonish levels of an Evil Dead II, it's still miles removed from the disturbing realism of a Schindler's List. Obviously, not everyone will agree; even one of my critical colleagues walked out of the screening with a full hour to go. But if you can handle the bloodletting, then it's worth catching The Raid 2, since underneath all that red glop is a genuinely absorbing action flick.