Whether it's Moises Kaufman's Gross Indecency, chronicling the downfall of Oscar Wilde, or Martin Sherman's Bent, depicting gays imprisoned by Nazi Germany at the Dachau death camp, compelling dramas written during the past 25 years have repeatedly reminded us how far gay rights have progressed. Yet progress can be precarious. Within the last year, we've seen the passage of HB2 locally and the imposition of Stalag Trump nationally: relapses and backlashes are still very possible.

Besides the occasional wave of reactionary politics and demagoguery, we must acknowledge that there's more to quality of life — gay or straight, First World or Third — than laws and rights. That's a key reason why Alexi Kaye Campbell's Olivier Award-winning drama, The Pride, promises to be so fascinating in its Charlotte premiere this week at Spirit Square.

Campbell compares 1958 with 2008 by placing the same three people in both eras — not 50 years older in the new millennium but, by some freak of reincarnation or misaligned parallel universes, the exact same people of the exact same ages. Of course, their identical essences are shaped by their upbringings and the times they're living in. So outwardly, vocationally and temperamentally, we will see that the Oliver, Philip and Sylvia of 1958 are different from those we're reacquainted with in 2008.

Costume changes and music cues will keep us from falling off the merry-go-round as we circle back and forth between the two eras.

"With the first shift to 2008," says Queen City Theatre Company artistic director Glenn Griffin, "it might be a little jarring for the audience to fully understand that we have shifted to a different time plane, but after the first few minutes it becomes completely understandable. How the characters dress in 1958 and again in 2008 is also incredibly different. I have worked extremely hard with the cast on body language of both decades, and how society norms would influence how they would do everyday actions from sitting, talking, acting, etc." 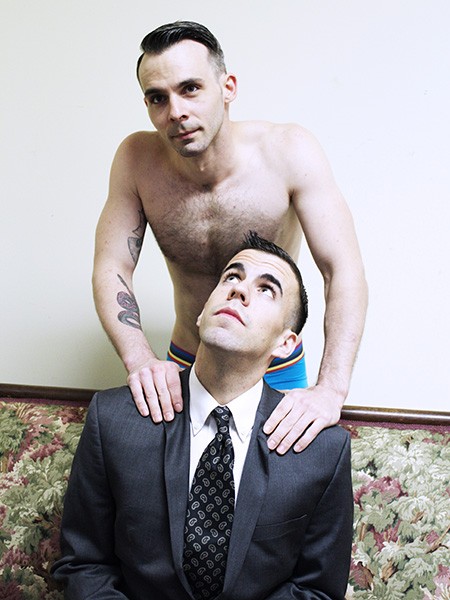 Philip is a real estate agent in 1958, married to Sylvia, an illustrator who brings Oliver into the picture when they collaborate on a children's book he has written. To Philip, Oliver's advances are a mortal threat: yielding to them risks everything. Jump to 2008 and Philip is a photographer who has already committed himself to Oliver, who is now a journalist. Entering such relationships is no longer an existential threat — but that is the problem.

Enough of a problem to scrutinize the presumed benefits of social progress. "In 50 years," Griffin notes, "so much has changed, but is it all for the better?" Maybe not.

"In 1958, it was illegal to be gay, which put a huge barrier up when it came to relationships in general," he continues. "In 2008, it is not illegal, but technology and sexual freedom have also put a large barrier up when it comes to close relationships. With different phone apps, it is so easy to find a sexual partner 50 feet away from you, hook up with them, have sex, and then they will leave. There is so much freedom now, which is great, but it's getting in the way of human connections, the real type, the one that lasts."

Bringing anguish to poor Philip at 50-year intervals, Oliver is likely the most fascinating creation in Campbell's drama. After a hiatus of just over eight years, Steve Buchanan is returning to Queen City Theatre Company — and Duke Energy Theater — to slip into Oliver's skin (or skins). In the space of a couple of months before leaving for New York in 2009, Buchanan ranged from Jason at Queen City, the hunky quarry of Valmont's seductive powers in Dangerous (an all-male update of Les Liaisons Dangereuses), to Riff, the leader of the Jets in Davidson Community Players' West Side Story.

Buchanan finds elements of both those diverse roles as he prepares for The Pride: the self-assured Riff inside 1958 Oliver and the wild, free attitude of Jason in the 2008 edition. Though he's not at all uncomfortable with his sexuality and questioning of the convention of monogamy, Buchanan admits that being two different people in the same skin, interacting with the same pair of people 50 years apart, was difficult at first.

It had to be. Imagine walking into a bare rehearsal space and trying to create slightly different selves, from scene to scene, in two different stories — even though you're performing with the same people in the same clothes with the same fictitious names in both stories.

"As I progressed thru the script and exploring with Glenn in various ways, I came to terms with exactly who I want Oliver to be," Buchanan says. "It's definitely been a struggle at times to nail down certain reactions to very similar circumstances. Glenn has been an excellent guide. We have explored the two worlds by watching documentaries, photos — even 1958 gay pornography — and he shared his own research and knowledge making this show come to life for us."

Griffin didn't see either the original 2009 London version of The Pride or the 2010 off-Broadway import directed by Joe Mantello for the Manhattan Theatre Club, and as a director, he prefers it that way, trusting completely to his informed imagination. Getting 1958 right was Griffin's primary challenge, but he also devoted time to 2008, and in directing the show, he had to give equal emphasis to both eras. Eventually, he decided the best way for his actors to look at themselves and their stories was through the lens of reincarnation.

"How often have these same three characters been meeting, interacting, falling in and out of love until they can finally get it right?" Griffin asks. "All three want the same thing in both decades. Sylvia wants to be a wife and mother, be loved, but have a satisfying career in the arts. Oliver wants to find love with Philip, but can't get beyond anonymous sex. Philip, on the other hand, wants to love Oliver, but can't get past what society is telling him about this same-sex relationship."

Amid such uncomfortable echoes, the contemplation of transmigrating souls — and what they want — may be soothing. Buchanan is striving to convey sweet coherence in the face of historical and societal flux.

"There is a stark difference in 1958 and 2008 Oliver as it pertains to his social lives," Buchanan says of the journey. "His ride feels very much like a wave. Ups and downs, calm to belligerent. Playing Oliver is one of the greatest challenges I've undertaken and I'm very proud of my work. I really hope you can see Oliver as a soul longing for love and acceptance. As a soul who is vulnerable and just the right kind of crazy."