If you were a comic book character, the mere mention of the Heroes Aren't Hard to Find Convention (Heroes Con to those in the know) would elicit musing wonderment and multiple exclamation points in your excited word balloons. Because Heroes Con is THE event for anyone who ever glanced at a cover of Spider-Man and thought, "Cool!" So start sewing your favorite super hero costume now, and practicing those witty, snarky, come-backs to spew at your villain (or hero, if you feel like crossing over to the dark side) of choice. This year is going to be big. And we mean big.

Last year, fans lined up to gawk at Rosario Dawson, drool over Adam Hughes' (of Wonder Woman and Tomb Raider fame) artwork, and spend their hard-earned dough on piles of comics and merchandise. With rows of vendors, art auctions, signings, gaming tournaments and playing "name that superhero" while people-watching costumed patrons, we predict that Heroes Con is going to outdo itself in 2007.

Run by Heroes Aren't Hard to Find store owner Shelton Drum, with the help of dedicated employees and many volunteers, Heroes Con was the second event held at the new convention center and is one of the best comic cons in the nation. Visiting the Heroes Aren't Hard to Find Web site (www.heroesonline.com) reveals that Drum and crew are already planning for the event, which will take place Father's Day weekend, June 15-17. (A great place to take Dad for a little bonding time!)

If the thought of a Cyclops, Emma Frost and Phoenix love triangle gets you excited, (or hell, if you even know who those particular X-Men are) take note. You'll be there, and it'll be big.

Elise Wilkinson and her new Collaborative Arts company continues to explore new vistas and venues in its second season. In March, they turn on the power at Spirit Square, bringing Steven Dietz's Fiction to Duke Power Theatre. It's Collaborative's first drama as we find out what happens when a husband and wife decide to read each others' diaries. Shrewd idea, right? Laurie Riffe makes her Charlotte directorial debut while Wilkinson, who recently directed Riffe in Bad Dates, returns to the spotlight as the mysterious "other" woman, wedging between Joe Copley and Sheila Snow Proctor as the husband and wife. Moon worshippers will then be glad to learn that Shakespeare at the Green will return for a second year, Wednesdays through Sundays, May 31-June 17. Warmer weather with our pentameters! But of course, the play's the thing, and when Collaborative selects it, we're told it will be either Julius Caesar, Twelfth Night, or As You Like It.

Stan Peal is promising that his Epic Arts Repertory Company will deliver its biggest production ever, a remount -- and rewrite -- of his own Goddess and the Magdalene. Peal first presented the work in 2001 in Minneapolis, before he and his actress wife, Laura Depta, lit up the Queen City with their multi-talents. He's bringing director Lon Bumgarner aboard for the project, reuniting the creative team that brought us The Friar & the Nurse back in 2003. Peal and Depta will be onstage again July 12-28 at the Actor's Theatre of Charlotte.

But they plan to cement their image as solstice people in June with a Summer Solstice fundraising event, no doubt mixed with the mummery and drummery that characterized the Mad Mad Madrigal of yore. Come December, Peal and Depta plan to bring the black magic of Mad Mad back to a location yet to be determined. "With just a few new twists and turns," says Peal, "to keep it as fresh as a Krispy Kreme." 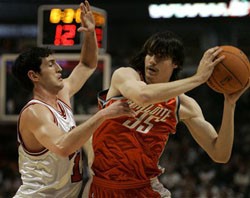 Adam Morrison has the great distinction of being the first Charlotte Bobcat player selected by Michael Jordan, B-ball legend and manager of the Bobcat's basketball operations. With this simple gesture, "His Airness" proclaims that the diabetic, moustache-sporting rookie has a lot to offer this young franchise. A fairly accurate assertion if you note the record Morrison brought with him from three years at Gonzaga University: West Coast Conference's All-Freshman first team, All-WCC first team as a sophomore, U.S. Basketball Writers Association Co-Player of the Year and the 2006 Chevrolet Player of the Year his junior year. Not to mention his ruthlessness on the floor; his ability to get into other players' heads to either inspire, destroy or create a game winning shot for himself; and that old-school style of play that's reminiscent of Larry Bird, a comparison he's often had to shrug. Whatever part of Adam Morrison's game you're watching, one thing is for certain: he's here to win -- and don't make the mistake of getting in his way.