All the while, Gregg Allman sat face down in mashed potatoes 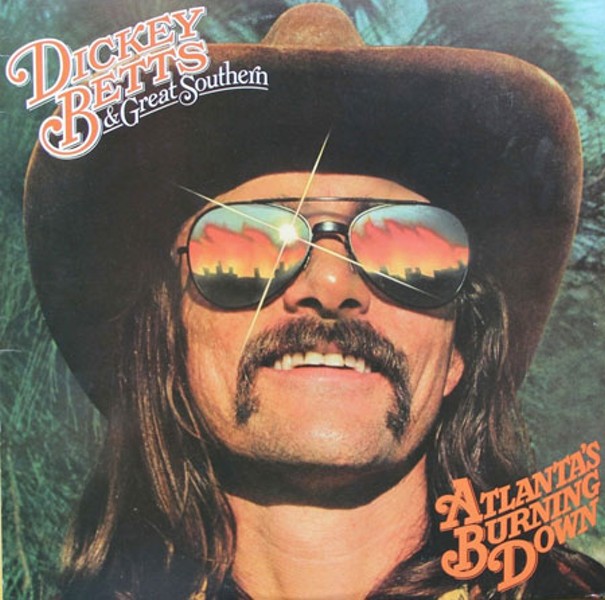 Before I became a humorist, there was a period of time when I was absolutely sure I was a great musician. Of course, this is a bit disturbing because there was also a period when I thought I was the reincarnation of actress Zasu Pitts. However, given time (and enough medication to rid the delusions of everybody in Denver) and I found my true calling. Still, before I got well, I spent a few years as a singer-songwriter.

I played the usual clubs from Connecticut to Carolina, but mainly concentrated on Manhattan. It was in this fabled city, that Dickey Betts borrowed my Guild guitar and rendered it totally useless. Well, unless you wanted to play "Jessica" on it, which is pretty much the same thing.

It was a late summer night in 1980. I was gigging at a place called J.P's, a well-known showcase club for the music industry. Meaning a lot of business types were enthusiastically cheering me on and going crazy, but they were also all on coke. So, they would have enthusiastically cheered on a burning orphanage. Still, the fun part was yet to come.

After my guitarist John and I began our second set of my streetwise, Lou Reed-like originals, there was something of an uproar. I was like, "Jeez, these songs really are deeper than I once thought. As am I," until I realized it wasn't my musical gift causing the squeals and huzzahs. Nope, making their way through the crowd, to a table near the front, were four wasted members of The Allman Brothers. I was going through a rebellious New Wave phase. So, it would've been impossible to think of anything more horrifying. Except, maybe, four wasted members of The Marshall Tucker Band.

Gregg Allman was in the worst shape. They served him some food while we played. Not that I think he derived much nourishment from it, since he was immediately face down in the plate. Unless he'd mastered that old Southern trick of eating your mash potatoes while simultaneously sleeping in them. Butch Trucks glared. Dan Toler smoked. Dickie Betts gave an Oscar-Winning performance, pretending he was actually interested in what I was singing. He deserved some kind of award. Considering the songs I was doing was about drug-addicted trannies. Plus, I was wearing blue eye shadow. Call me crazy, but I don't think that's popular with a guy wearing a 10 Gallon Hat and a knife taped to his cowboy boot.

Mercifully, at about 10, my second set ended. I was putting my guitar in its stand, as was John, when a voice, lightly-dusted with a Southern accent said, "Hey brother, that was good." I looked up and there was Mr. Betts, a trim, compact figure, with a friendly smile. I thanked him. But would've, regardless. Let me reiterate, the guy had a knife taped to his boot. It was then that Dickey (I think he was going through his "Richard" phase, actually), made his fatal request: "Think I might borrow your guitar for a bit?" He asked as breezily as Mark Twain.

Now, normally, this request provokes anxiety in me. Situated between someone asking me for money and a big guy wondering if we might engage in a night of wife-swapping. But, I was stoney broke and wasn't married. Plus, I too, had been given so much free coke that night, my nipples were twirling like a stripper's tassels. I said to Betts, "Sure, you think we could do something together? I really like George Jones. Maybe some country."

Dickey, using the sort of underhanded misdirection that later got him fired from the band, said, "Sure, absolutely. But right now, I'd just like to jam a bit."

Before I could express my skepticism (which might've resulted in a stabbing), Betts took my axe, Toler was up and borrowed John's Fender Strat and I found myself seated at a table near the remaining Brothers. I might have been more alarmed, if I wasn't so busy watching Gregg. Somebody had to. He was inhaling and exhaling his mashed potatoes in a tableaux so riveting, only a satiric artist like William Hogarth might've done it justice.

Soon enough, Betts was standing in my place on the riser and with his buddy holding the Strat, began noodling. Well, that's a kind word. Metal Machine Music is noodling. Betts played an extravagant series of incoherent runs, while moaning into the mic with the pitch-perfect aplomb of Alfalfa Schweitzer singing "Arbor Day."

None of this was too fatal, though. What gave me pause was the way Dickey was manhandling my guitar. He's a smallish fellow, Betts, but his hands are big. So, he looked less like a guitar player, than a Grizzly stripping the skin off of a salmon. He bent strings. He played power chords. He invented sounds that the Lord Himself would've called an abomination. And he did this and did this and did this. While I watched helplessly, occasionally thinking I should pick Gregg Allman's face up from his plate. Fifty long minutes of this free-from guitar molestation finally ended.

I figured, now that Dickey had done everything but have sex with the sound hole, he owed me a duet. But I was waylaid. I went up to Mr. Betts, who handed me back my guitar and walked away. This deceptively strong little Rhesus Monkey had so manhandled my axe, that the neck now seemed rubbery and about to curl up into a tight little ball. I stared at my guitar with such stunned sadness, it didn't matter what song I had planned. This once-strong instrument looked like it couldn't have handled Sukiyaki, played solely on the high E string. Betts yelled "Thanks" and returned to his table where various members of the brothers were combing gravy and crumbs out of Gregg Allman's beard.

I ended up doing one more set, backed only by John and his Strat. Mostly ballads. Anything that had even the most tenuous connection to despair or suicide. Those were my two dominant modes, after Betts had strangled my guitar to death. I finished up at 1 a.m. and left. By then, it seemed like Gregg was being fed, but, I think, intravenously. Betts tried to make eye contact with me, but I refused. His turning my guitar neck into a rolled-up firehose was pretty much why. I also didn't want to piss him off. He still had that knife taped to his boot.

Eventually, I got my guitar, uh, straightened out. I still have it. But it's never quite forgiven me for letting a strange man have his way with it. Me, I've pretty much moved on. I write now. I can listen to the radio. But if I ever hear anything that even remotely sounds like the opening to "Ramblin' Man" I change the channel as fast as I can. After all, some terrible acts you just don't forget. And if anything? By God, this was one of them.