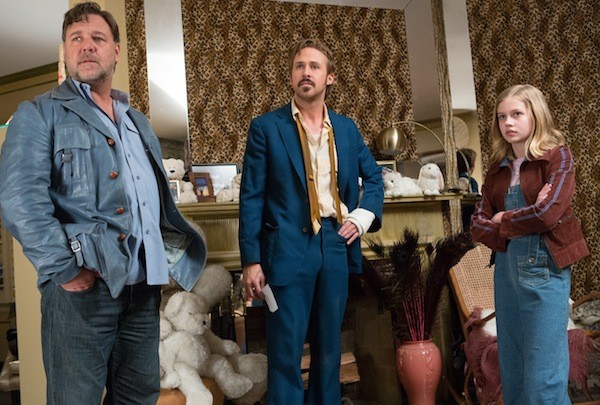 The original Lethal Weapon back in 1987 has been given far too much credit as the movie that largely birthed the "buddy action comedy" (48 Hrs. and Running Scared are but two which preceded it), but it was definitely the most successful in that it led to three sequels even more lucrative at the box office. It was also the calling call for Shane Black, who was in his early 20s when he wrote the script and went on to pen other pictures like Last Action Hero and The Long Kiss Goodbye and write and direct Kiss Kiss Bang Bang (his best film) and, most recently, the cluttered Iron Man 3. After that brief dalliance with Marvel, Black returns to his cinematic milieu with The Nice Guys, a witty romp starring the unlikely team of Russell Crowe and Ryan Gosling.

The Crowe-Gosling pairing might stir unhappy memories of such past what-were-they-thinking? twofers as Pat Morita and Jay Leno (Collision Course), Ted Danson and Howie Mandel (A Fine Mess) or Jeff Bridges and Ryan Reynolds (R.I.P.D.), but the truth is that they turn out to be a dynamic duo, going together as well as peanut butter and chocolate. Their characters, the bearish Jackson Healy (Crowe) and the bumbling Holland March (Gosling), are private dicks who pool their hot-and-cold talents to track down a missing woman named Amelia (Margaret Qualley) while subsequently investigating the murder of porn star Misty Mountains (Murielle Telio). And because it's set in 1977 Los Angeles, unfortunate clothing and hairstyle choices abound, although Healy and March aren't about to allow sartorial suckiness and grotesque grooming to stand in their way.

Like practically all of Black's scripts, the one for The Nice Guys is cold and steely to the touch, with little warmth or sympathy to be found anywhere. And while his convoluted plot aspires to stir memories of the likes of Chinatown and L.A. Confidential (the latter starring two of this film's players, Crowe and Kim Basinger), it's really not much more complicated or polished than any given episode of Magnum, P.I. Instead, Black's strengths rest elsewhere, particularly his facility with clever dialogue and his ability to set up hilarious gags (cue the uproarious Richard Nixon cameo). Black's homages are also a nice touch: Gosling amusingly channels Lou Costello in panic-stricken mode at one point, and there's a glimpse of a billboard promoting Airport '77 and an early teaser ad for 1978's Jaws 2 (I'm guessing Universal Pictures paid Warner Bros. a hefty sum for those plugs, since Warner is behind The Nice Guys while Universal has both the Airport and Jaws franchises arriving on Blu-ray next month).

In the manner of Mel Gibson's Martin Riggs, the movie has several lethal weapons, including a dapper killer (Matt Bomer) who goes by the name John Boy (thanks to his Richard Thomas-esque facial mole). It also has a secret weapon in newcomer Angourie Rice, cast as March's brainy daughter Holly. This 15-year-old Australian actress is excellent in a key role — she's as integral to the action as the two stars — and comparisons to the teenage Reese Witherspoon are not inappropriate. Whether she ends up enjoying a similarly vibrant career remains to be seen, but she's off to a terrific start.