The New Mythology of AFRO-FUTURISM

(Or How I Learned to Stop Worrying and Love Erykah Badu) 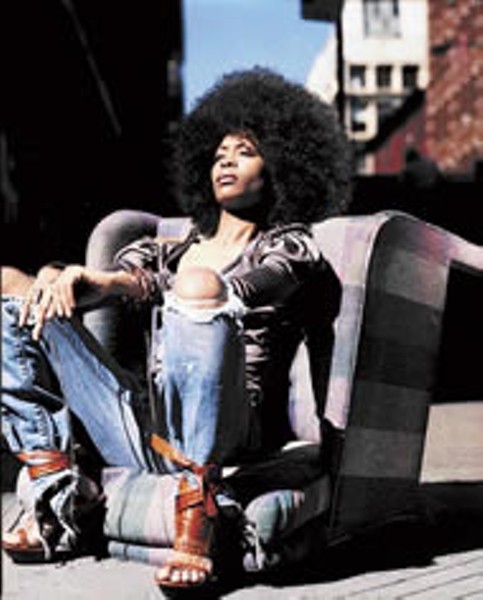 Marc Baptiste Too cool for the old school: Erykah Badu, retro-future soul sista No. 1, performs in Charlotte this weekend.
Funky Prez-O-Dent George Clinton once asked, "What is soul?" And a heavily stoned chorus howled back out of the fuzz, "I don't know!!" Well, we black bohemians in the cradle days of the 21st century are hardly wiser: Soul might indeed be "chitlins foo yung" or a "joint rolled in toilet paper." Perhaps the requisite for knowing the nature of soul is to have been conceived somewhere in the psych-funk meshes of Isaac Hayes' 9-plus minute epic, "Hyperbolicsyllabicsesquedalymistic."

Hayes may just be the perfect case study in tracing how the so-called neo-soul genre — or post-soul culture — came to be. His storied career externalizes the private journeys of his black followers who came of age in the era of desegregation and the murder of Dr. Martin Luther King Jr. Hayes moved in a complex trajectory from Stax Records poobah (in the golden age of Love Generation martyr Otis Redding and biracial-band pioneers Booker T. & the MGs) to Black Moses boudoir pin-up (in his early-70s "Shaft" period) to 80s radio personality to 90s South Park icon and celebrity Scientologist.


To be a post-soul creature is to recall the halcyon days of youth spent in black-community living rooms full of plastic-covered, faux-Versailles furniture, digging Stax LPs beneath a triptych of Dr. King, Jesus and JFK. It means recognizing Hayes' "Hyperbolicsyllabicsesquedalymistic" as the key sample in Public Enemy's incendiary "Black Steel in the Hour of Chaos." It means remembering the satirical blaxploitation hero in I'm Gon' Git You Sucka who strutted the streets of Anyghetto, USA, with the "Theme From Shaft" as a personal soundtrack played by members of Fishbone. If, in the course of your day, you helplessly quip, "He's a bad mutha...(Shut yo' mouf!)," then you probably make up the audience for consciousness-raising headwrap music.


Da Queen City gets loose for a veritable onslaught of post-soul acts this week, with the arrival of contemporary R&B dreamgirls Destiny's Child, who sublimate the strong black woman archetype beneath layers of crossover-pop gloss and Buppie (Blingie?) striving. These three children are the apotheosis of the headwrap aesthetic, whereas the sistas coming to town with the Sugar Water Festival — Dallas hood-presario Erykah Badu, Re-Re Jr. sistagurl Jilly From Philly, UK duo Floetry and pioneering feminist rapper-turned-Hollywood playa Queen Latifah — epitomize it. Whatever the artists' strengths or failings, they collectively represent the heiresses of such Harlem Renaissance Niggerati as Florida-born scribe Zora Neale Hurston, Beat-era folkie Odetta, NC-born activist-chanteuse Nina Simone and forgotten Capricorn Records black rockette Maxayn Lewis. With their full figures and sassy straight talk, both pre-thespian Latifah and Jill Scott have channeled the voices of Bessie Smith and other founding blues mamas. For now, Scott and company are doing better than 60s soul queen Mavis Staples, who documented her struggles on her late-2004 Alligator Records return, Have a Little Faith.


As folk of color like to bear witness to and signify on the ways African Diaspora culture has always been a modernist bricolage mapped on black bodies, one can never truly separate the litany of forebears from the black aesthetic du jour, and the work of the dreamgirls and Sugar Water women is no exception. (By the way, even twang-tastic homeboy Anthony Hamilton is currently cloistered at Charlotte's Reflections Studio this week, working on the follow-up to his post-soul Coming From Where I'm From.) Indeed, some observers label neo-soul as merely the music of contemporary black singers obsessed with aping the Holy Trinity: Stevie Wonder, Donny Hathaway and Marvin Gaye. (I reckon the chick counterpart is Aretha, Chaka and Gladys). However, ours is a generation that digs the Ohio Players and Led Zeppelin equally.


To codify the post-soul culture/intelligentsia these artists belong to is difficult, because the extra-musical concerns (shared political, social and cultural experiences of a generation of black youth born between the 1963 March On Washington and the 1979 release of "Rapper's Delight") weigh even heavier than the sonic ones. Yes, several of the acts in Charlotte this week are as true a continuation of the country-soul tradition that emerged from Muscle Shoals, Alabama (and elsewhere in the Deep South) as country stars Montgomery Gentry et al. are of classic Southern rock. Yet cultural critics rarely probe this fact. Even more crucial is that so-called neo-soul is music of negation, a black hand-side response to centuries of cross-racial desire animating the American scene. Even as it affirms black positivity, uplift and the survival of body and cultural soul, the sound has to defend against exogamous poachers/poseurs, black apathy and the mentality that prefers to enshrine the "purist" blues or soul master who is past his/her prime rather than reckon with contemporary R&B.


I date the foundational moment of neo-soul/post-soul to the mid-1980s, when the premier black pop outfit of the post-civil rights era, Earth Wind & Fire, began to fade from the charts. That was when self-consciously retro-nuevo "cultural mulatto" artists like Prince and Terence Trent D'Arby garnered both critical and commercial acclaim. It was when rap crossed over via Run-DMC's historic cover of Aerosmith's "Walk This Way," and when former Hathaway collaborator James Mtume's innovation of a compressed, synth-heavy production style (think Evelyn "Champagne" King) forever altered the sound of the black-radio mainstream (and killing off the funk big bands). But to me, it's less interesting to offer an encyclopedia of artists who have fallen under the post-soul banner — from D'Arby "rival" Chocolate Genius to ATL singer/songwriter Van Hunt — than it is to investigate why the neo-soul movement ultimately has never succeeded. For all the critical acclaim artists like Hamilton (deservedly) get, and despite songs like India.Arie's "Video" having an impact beyond the charts, this generation's musical output is a failure in commercial terms. But why? A lot of this music is as complex and piloted by hybridity as the Allman Brothers Band's back catalog. Is it because there's a dearth of multiracial bands that exogamous audiences can identify with? What about the last 30 years of post-soul culture being read as more compelling when processed through a white media lens, whether it's self-styled Generation X native scout Doug Coupland or a Ben Stiller buddy flick?