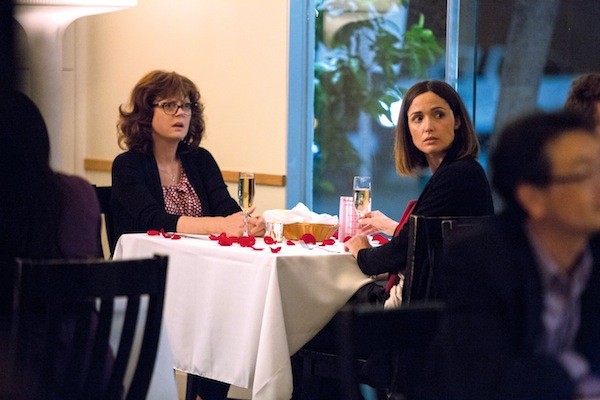 Overbearing mothers in movies are as plentiful as shells on the sand, but rare is the overbearing mother who's written with such love and care that she ends up being less defined by her obnoxiousness than by everything else. Such a mom can be found at the center of The Meddler, the new film from writer-director Lorene Scafaria.

Scafaria wrote the script for the insufferable 2008 film Nick and Norah's Infinite Playlist, but that marked her first behind-the-scenes credit (she started out before that as an actress), so all is forgiven. More recently, she wrote and directed 2012's lovely and unique Seeking a Friend for the End of the World, which made my 10 Best list that year but bombed at the box office and left most other critics cold. Hopefully, Scafaria will have more all-around success with The Meddler, a rich motion picture hiding behind a silly-sounding title. (I would have gone with Heavy Meddle; insert audible groan here.)

Not that The Meddler doesn't describe what's going on within the confines of the picture. Following the death of her husband, Marnie Minervini (Susan Sarandon) takes herself and her sizable wealth (her spouse left her set for life) from the East Coast to the West, where she hopes to spend more time with her grown daughter Lori (Rose Byrne). Lori is a Hollywood screenwriter still stinging over the guy who left her — she's also a workaholic, which means she has little time for a mom who calls her incessantly on her cell phone and babbles endlessly about whatever pops into her head. Forced to fill her days by other means, Marnie ends up immersing herself in the business of others but actually doing them good — whether it's her daughter's lesbian friend (Cecily Strong), who couldn't afford to have a proper wedding, or the young iPhone salesman (Jerrod Carmichael), who just needs the proper push to continue his education. Marnie even finds time to hang out with a potential beau, a retired cop who goes by Zipper (J.K. Simmons), although her own romantic reticence means her interested suitor has his work cut out for him.

Marnie is a terrific character, brought to life not only by Sarandon (it's her best work in ages) but also by Scafaria, who refuses to let the woman lapse into the same sort of cartoonish caricature displayed by, for instance, Barbra Streisand in 2012's The Guilt Trip or even Sarandon herself in 2014's Tammy. Marnie is a high-maintenance handful, but she's never without our sympathy or our concern. Byrne is also good as the daughter who just wants some room to breathe, while Simmons is absolutely charming as the gruff yet soft-hearted guy who knows it's never too late for love (presumably, Sam Elliott was busy).

Scafaria makes a few missteps — there's the now-obligatory scene of a senior citizen under the influence (in this case, pot), and it adds nothing — but her instincts as both a writer and a director ensure that The Meddler always ends up back on the right path.