The Lodge angles for success 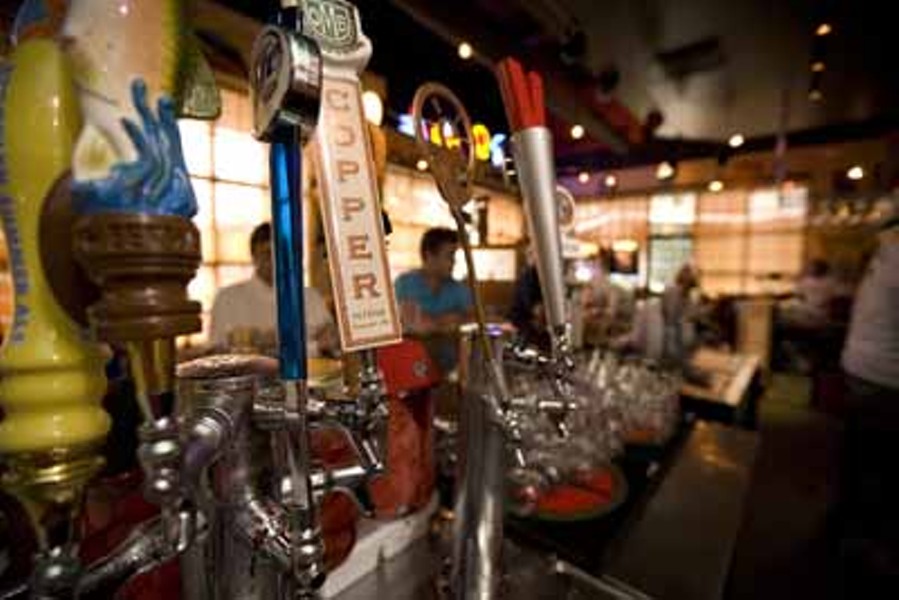 SATISFYING SPORTSMEN'S THIRST: With a beer list of 115, The Lodge promises to satisfy the thirst of the beer crowd.

The old saying is you can't shoot a moose from the lodge, but at The Lodge: A Sportsman's Grill in south Charlotte, you can fantasize about eating one. There may not be a Palin-styled moose burger on the menu, but burgers are offered with bison or venison meat.

The 70-seat Lodge, which opened last April, is the latest entry of J.D. Duncan -- co-owner of Bonterra, Las Ramblas, and Mac's Speed Shop -- and partners Mark Nuell and Grant Schoonmaker. Duncan has scaled many mountaintops in Charlotte: refurbishing a historic church into a fine dining establishment, opening a biker bar/barbecue joint now with three locations, and capitalizing on tapas during the Spanish craze of the early aughts. Now the mood is strictly casual among Charlotte restaurateurs. The city's new economy has already wiped out many potential high-end customers, and the big-money, high-wire establishments are readjusting downward. No need to make anyone feel "special" anymore. New entries in this bare-bones marketplace offer less expensive items, including a sizable list of fried items with a focus on the bar. The Lodge is no exception. The new dining reality in Charlotte is scaled-down expectations to match smaller checks.

After languishing empty for some time, this space was reconfigured into a sports bar and eatery. The Lodge does not have the great-Western lodge cabin look: no log furniture, antler lighting or white birch mirrors to remind you of that ranch you visited in Wyoming -- or Disney World. Here, the decorating budget went for sporting paraphernalia. A surf board is propped against a back window while Panther and old Hornet gimmes are tacked on another side. Hunting trophies -- dead mammal heads and fleeing game fowl now static -- as well as guns are featured, too, while pods of lights dangle over the bar.

The genial menu is less chef-personalized and sports common dishes like fried pickles, which have become ubiquitous on Charlotte's menus. In fact, many of the items on this menu are fried following another old saw: Grease sells. Crispy has replaced an avalanche of more expensive seasonal herbs and spices, perhaps to the point of overkill: On the menu is a basket of French fries "smothered in gravy."

Chef Joel Leichtner is at the helm in the kitchen. The menu was put together by Donny Anderson, the general manager, and Blake Hardwick, the former executive chef for this restaurant group who has since departed for another kitchen. Some menu items are named for friends and family. The hot dog (not a foot-long, but two six-inchers) is named for Jimmy Bookout, a renowned wine aficionado and local musician. Another item, Bill's Fish Sandwich, tips the torque to Bill Dance, the television fisherman.

The dining room crew is solicitous, but busy. One suggestion not to take, however, is the choice of pork barbecue on the quesadilla. Pork barbeque and cheese is never a good idea. However, the pork by itself rocks. The turkey chili -- with beans -- is a scrumptious cheap thrill, soothing yet spunky. The Philly cheese steak misses the mark by offering an overly dry rib eye.

The Angus half-pound burgers are stain-your-shirt juicy -- and no, you really cannot ask me if I want the burger rare. I don't care if the kitchen grids the meat. This is not a Charlotte dictate: It's a North Carolina rule. The NC's Department of Environmental and Natural Resources in Rule 2609(e) states "ground beef and foods containing ground SHALL (the state's emphasis, not mine) be cooked to an internal temperature of at least 155°F." That's medium well, and, by the way, the USDA recommends 160 degrees for ground beef. Nonetheless, the Lodge burger was meaty perfection.

Currently, the beer list stands at an exhaustive 115 with enough selection to keep the beer crowd happy, while a much smaller wine list offers selections by bottle or glass. Burgers range in price from $7.50 for the veggie to $9 for Ahi tuna. Other sandwiches are in the same price point. Blue plate specials are more and include chicken fried steaks (for the Texans and Okies out there), shepherd's pie, and fish and chips.

The desserts are a bit of a letdown, but comfort all the way: a banana pudding with smashed Nutter Butter cookies and a dirt cake with crushed Oreos. Yes, this is a sports bar that caters to families. The Lodge is more kid-friendly Kipling than macho Hemingway, but casting a larger net may be the smartest move.

Know of a restaurant that has opened, closed, or should be reviewed? Does your restaurant or shop have news, menu changes, and new additions to staff or building, upcoming cuisine or wine events? To be included in our online blog, Eat My Charlotte, send information to Tricia via e-mail (no attachments, please -- these are destined for the spam filter): [email protected].