The Life and Crimes of Rae Carruth — 10 Years Later 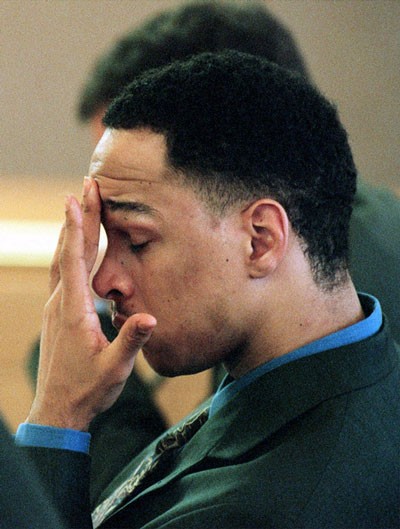 Carolina Panthers wide receiver Rae Carruth immediately emerged as a fan favorite, thanks to his impressive rookie season. That adulation ended for the 1997 NFL draft pick after the night of Nov. 16, 1999. Fingered by his dying — and pregnant — girlfriend Cherica Adams as the man responsible for shooting her four times as she sat in her car (Carruth blocked her path with his car while the shooter drove by in another vehicle), Carruth was tried and in January 2001 found guilty of three charges, including conspiracy to commit murder. The football star was sentenced to 18 to 24 years in prison.

Creative Loafing approached the tragedy more selectively and from a philosophical bent, particularly after the verdict was announced. Columnist Jerry Klein wrote a piece ("To Err Is Human," Jan. 27, 2001) in which he speculated whether Carruth was indeed behind the murder, while fellow columnist Shannon Reichley analyzed the TV coverage of the trial ("The Verdict Is In," Feb. 3, 2001), taking time to praise the Charlotte outlets. "I chose to flip between our locals, because of the overly melodramatic spin Court TV insisted upon," she wrote. "In particular, the irritating Nancy Grace." Of course, CL made sure to also tackle the subject from a skewed point of view: Sam Boykin's Feb. 17, 2001 cover story, "Who's More Obnoxious — Ray Wooldridge or Theodry Carruth?" asked readers to vote for either the Charlotte Hornets co-owner or Rae's camera-hog mom. (Theodry Carruth handily won the title, 110-34.)

As the belated cherry on all this original coverage, Jarvis Holliday wrote a comprehensive piece during the 10th anniversary of the tragedy, recapping its history as well as providing updates on its central players — not only Carruth (who will be released around 2018) but also Rae and Cherica's son Chancellor, who was born 10 weeks premature as doctors performed an emergency cesarean on his mother. Although suffering from cerebral palsy, Chancellor is being lovingly raised by Cherica's mother, Saundra Adams.

"As cruel and unfair that it is that Chancellor has to live with a debilitating, lifelong condition," Holliday concluded his story, "perhaps it's a good thing that he may never understand what his daddy did to his mother. That he may never fully realize what his father is most known for."