The Intouchables: Odd couple at work 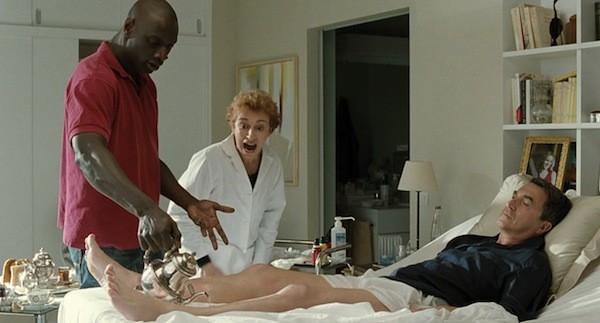 In these United States of America, it may be all about The Avengers and Avatar and Armageddon, but in the rest of the world, where subtitles aren't viewed as a national threat but as a fact of life, there's also been room for The Intouchables on the all-time box office champs list. A global word-of-mouth smash, this French seriocomedy has earned an astonishing $350 million, a hefty figure that has allowed it to become the highest grossing non-English-language film in history. That such a slender but admittedly agreeable movie would be the one to hold such a distinguished title seems a tad disheartening, considering all of the truly great foreign flicks that have come before it. Then again, Americans spent that same amount to go see Transformers: Dark of the Moon, so who am I — or any other stateside citizen — to criticize?

It's easy to see the feel-good appeal of The Intouchables (simply Intouchables in France), which currently ranks #80 on IMDb's Top 250 list (just above, uh, Kurosawa's landmark Rashomon). Based on a true story, it centers on the relationship between Philippe (François Cluzet), a millionaire who's been a quadriplegic ever since a paragliding accident, and his caretaker Driss (Omar Sy), an ex-con from the projects who reluctantly accepts the position even though he had planned on continuing to collect those welfare checks. Philippe is cultured, reserved, but not without a sense of humor; Driss is boisterous, crude, and willing to joke about anything. Philippe appreciates that Driss doesn't pity him — if anything, Driss goes out of his way to mock his employer's immobile condition, his love for the arts, and his taste in music (he asserts that Bach was an "18th century Barry White") — and it's not long before the men come to genuinely care for each other.

There's been some criticism regarding the decision of writer-directors Olivier Nakache and Eric Toledano to turn Driss into a black man (something he wasn't in real life), but I'm inclined to think that choice was made in order to cast the popular comedian Omar Sy in the role rather than as some racially motivated shorthand for poverty. Still, the film's examination of class differences is often heavy-handed and condescending — when Driss, who shares a tiny bathroom in his slum home with a half-dozen family members, first spots the luxurious bathroom that will be his and his alone in Philippe's house, did we really need to hear Franz Schubert's "Ave Maria" playing in the background? Some plotting issues also threaten to undermine the goodwill generated by both the film and its characters. At one point, Philippe elects to send Driss back to the projects to tend to his family, a decision that makes no sense considering Philippe's enormous wealth (he couldn't have helped the family himself?) and the dead-end options available to Driss there. (If this vignette was based on fact, the real-life Philippe suddenly becomes a lot less appealing, though of course here his decision is framed as a noble one.)

Thankfully, the superb lead performances hold everything together. Initially, Cluzet (known to U.S. art-house audiences for the hit thriller Tell No One) seems to have the more difficult role, since he can only move from the neck up — his stillness requires as much attention to detail as would, say, a performer essaying the role of an ice skater. But over the course of the picture, it's Sy who snags MVP honors (indeed, he beat Cluzet for France's Best Actor Cesar Award). He's strong in the dramatic moments, but he's even better when his character is allowed to cut loose and display a skewered joie de vivre. He rises to the top even when the script tries to hold him down.