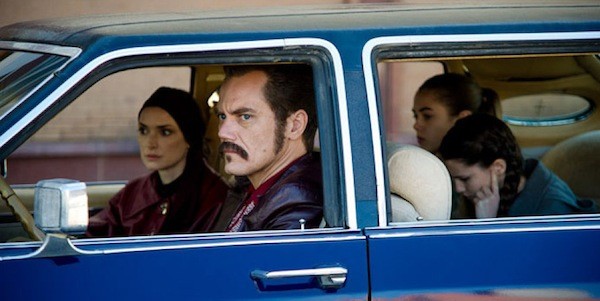 Nobody would think to call The Iceman a romanticized version of anything, but when compared to the real-life story of Richard Kuklinski, this excessively brutal film comes off almost as gentle and dreamy-eyed as a Nicholas Sparks adaptation.

Kicking off in the mid-1960s, the movie stars Michael Shannon as Kuklinski, who woos and weds Deborah (Winona Ryder) while holding down a menial job dubbing porno tapes (he tells Deborah that he dubs cartoons for a living). An encounter with crime boss Roy DeMeo (Ray Liotta) leads to him working as a hit man for the mobster, and once that relationship begins to sour, he teams up with another killer-for-cash (Chris "Captain America" Evans, unrecognizable under all that ratty hair) for more murderous mayhem. Over the course of approximately two decades, Kuklinski kills over 100 people, and the sick punchline is that his wife and daughters are never the wiser, believing him to be a financial broker.

The movie posits that Kuklinski did everything for the sake of his family, with the character himself saying that he only cares for Deborah and his girls and nothing else. The film also repeatedly pushes his claim that he will never hurt women and children, preferring instead to only murder men — and even then mainly for monetary gain. In real life, though, Richard Kuklinski was more of a serial killer than a paid assassin — he enjoyed the art of the kill — and he would occasionally beat up his wife on the side. Writer-director Ariel Vromen and co-writer Morgan Land, adapting both Anthony Bruno's book and an HBO documentary, naturally need to streamline actual events for the sake of a coherent movie that clocks in with an acceptable running time, but in this case, they have marginally softened the character while also jettisoning many elements that would have made this picture unique. As it stands, this largely plays out as a formulaic mob flick, full of messy double-crosses, tough-guy patter, secretive meetings in big limos, debts that must be repaid in blood ... you get the drift.

Shannon delivers an appropriately steely performance, but since his character isn't inherently interesting, he can only provide so much of a center to the movie. The supporting roles are all well-cast — Robert Davi is especially memorable as a gangland in-between, and the prolific James Franco pops up in one particularly distinctive sequence — but even the heat these actors are packing isn't enough to thaw out the picture's frosty approach.