The Guilt Trip: Are we there yet? | Reviews | Creative Loafing Charlotte

The Guilt Trip: Are we there yet? 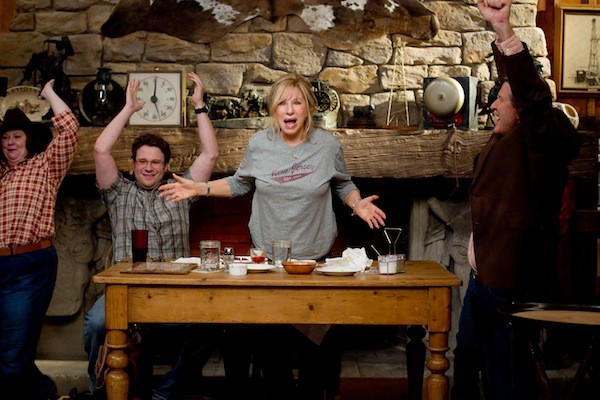 Even acknowledging the hardship of finding suitable roles for women over 40 in Hollywood, it's difficult to believe that The Guilt Trip was the best that Barbra Streisand could nab for her first leading role since 1996's The Mirror Has Two Faces (with only supporting turns in two Fockers flicks in the interim). If this isn't quite as disastrous as Jane Fonda tethering her mid-2000s comeback to projects co-starring Lindsay Lohan (Georgia Rule) and Jennifer Lopez (Monster-in-Law), it's not an occasion for celebration, either.

The entertainment icon plays Joyce Brewster, a widow whose favorite pastime is doting on her grown son Andrew (Seth Rogen). An inventor hoping to turn his product — the awkwardly named Scieoclean, an environmentally friendly cleaner so safe you can actually drink it — into the next big thing, Andrew travels cross-country in order to meet with marketing executives for various corporations (Costco, Kmart, etc.) who might be interested in stocking it. He elects to take his kvetching mom with him, which allows her nonstop opportunities to embarrass her son by questioning his business decisions in front of company officials, forcing him to visit an old high school flame he hasn't seen in over a decade, and asking if his penis ever turns purple as it did when he was a child.

Streisand and Rogen work well together and, purple-penis gag aside, the movie is free of the coarseness that has come to define modern comedy. But it's also free of anything resembling laughs — a deadly strike since the dramatic moments prove to be even more feeble. Still, there are those who will be happy to accept this as cinematic comfort food: At the advance screening, a smattering of laughs was generated by the very first scene, which simply involves Joyce eating M&Ms in bed. If you find the notion of Streisand chewing on candy rife with comic genius, then knock yourself out.