Cause and effect at Spoleto USA 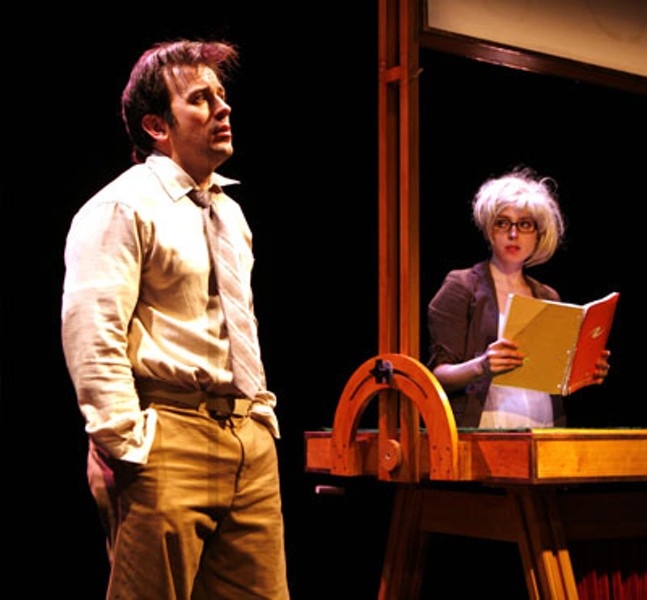 Photo courtesy of The Foundry Theatre Steve Cuiffo and Maggie Hoffman in Major Bang or: How I Learned to Stop Worrying and Love the Dirty Bomb 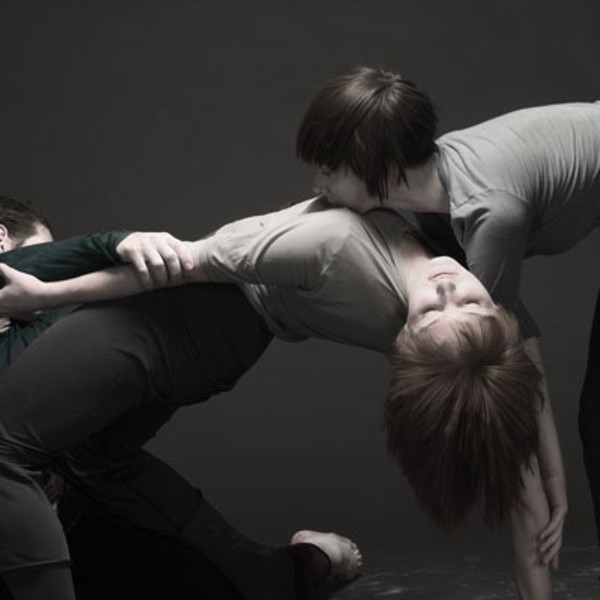 Faustus, The Last Night -- Who says opera needs dialogue, conflict and tension? Not wunderkind Pascal Dusapin, whose 21st Century pastiche of Marlowe, Goethe, Shakespeare and Beckett spread a quintet of characters across the Sottile Theatre stage without bothering to have anybody -- except Faustus and Mephistopheles -- communicate with one another.

Writing in a language he can hardly speak, however, Dusapin weds text and music together better than any recent composer/librettist who has worked with the English language. I admit finding a certain charm in Meph's passing off bogus astrology on Faust as true science -- and a fascination in Dusapin's blinding treatment of enlightenment. On balance, this was a Night that brimmed with boredom.

Nothing timid about this year's stage lineup. Even the comfort food at Dock Street Theatre, Somerset Maugham's Constant Wife, has some bite to it.

Major Bang -- Written by Kirk Lynn, Bang is a wonderfully weird stew that borrows shamelessly from such disparate sources as Dr. Strangelove, The Bodyguard and Homeland Security's ready.gov website. Drop actor-magician-Lennie Bruce impersonator Steve Cuiffo into the pot, and you can easily imagine an evening where everything seems to come at you unexpectedly from left field.

Yet there's a storyline that helps it all to cohere, centering on two characters at a radioactive facility, Frank Farmer and his conflicted boss, Rachel. Sure, Rachel realizes that Frank is a fuck-up, his latest catastrophe allowing his reclusive son to pilfer fissionable material from the plant during a Cub Scout tour. But she's aching, a la Whitney Houston, for Frank to ask her out.

Maggie Hoffman does the honors as the repressed nympho in this two-hander. Cuiffo portrays both the hapless Farmer and his son, based on a true-life teen who built a nuclear reactor in his garage. Above all, Cuiffro goes into vulpine mode to do the title character, the insane scoutmaster bent on nuclear conquest. Truly a blast.

blessing the boats -- Two kidney transplants have turned poet Sekou Sundiata into a crusader for organ donations. Sundiata also proved to be a compelling performer telling his own story, which he has been touring with since authoring his solo piece in 2002. It's a testament to tenacity, of course, peppered with the agonies of waiting for a donor, undergoing dialysis, and feeling the effects of the medicine cocktails designed to ward off organ rejection.

Sweetening Sundiata's narrative were his accounts of "earth angels" who came to his aid at the most agonizing points in his epic ordeal. Catch this informative, sobering and inspiring piece if it comes to Charlotte.

The Constant Wife (June 10) -- Maugham's thesis comedy has staunch feminist leanings from the outset as we get to know the wronged wife, Constance Middleton. Midway through Act 2, Maugham seems willing to go beyond Shaw and Wilde in boldly advocating open marriage. But the playwright eventually retreats from such radicalism.

It's a deft retreat, however, so Dr. John Middleton still feels the sting of his wife's emancipation. And the Gate Theatre production, with Paris Jefferson nearly divine in the title role, is exquisitely tailored without succumbing to British reserve. Simon Coates as Dr. John is comically choleric in his discomfiture, and the rest of the cast is very solid behind the troubled couple.

But not always audible when they switch from moral disputation to witty repartee. Sit close to the stage if you can.

medEia -- Hailing from Amsterdam, the Dood Pard (Dead Horse) company certainly has a unique way of reinventing Euripides' fiery tragedy. With all three performers portraying the chorus -- and taking turns, regardless of gender, portraying the major roles of Jason and Medea -- this modernization by Oscar van Woensel managed to extinguish Euripides' fire, making a torridly personal conflict almost totally impersonal. A sprinkling of Beatles lyrics in the dialogue actually added humor to a melodrama that is usually bloody and humorless.

Musical interludes, hearkening back to the ceremony of Greek drama, allowed the actors to take a break and watch slide shows with the rest of us. Jason's photos from his travels in search of the Golden Fleece? Perhaps. But this remake, presented with a simplicity akin to the Mac-PC commercials, sustained only a loose grip on my interest.

The highlights have been Rubberbandance, with its unique synthesis of classicism and hip-hop, and the Batsheva Dance Company from Tel Aviv. Forget the hora and other Jewish wedding frou-frou. This company, presenting choreographies by artistic director Ohad Naharin, was relentlessly purposeful, rebellious and grim. Even religious ritual seemed to be portrayed as regimented hysteria. Shen Wei Dance Arts started out promisingly, with fascinating new idioms of movement and partnering. But their Connect Transfer grew wearisome around the 40-minute mark, and its most colorful gimmick -- painting the white floor with their bodies -- would have been far more effective on a raked stage.