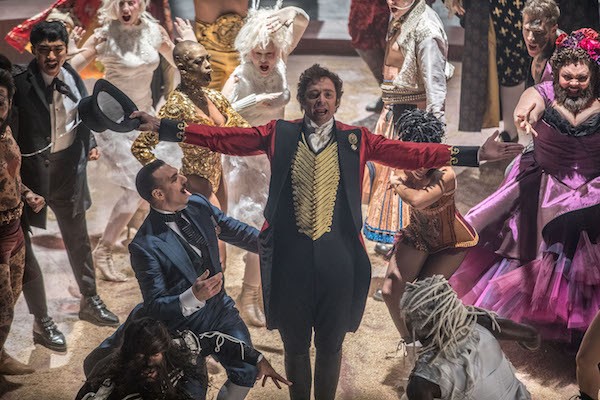 Circus entrepreneur P.T. Barnum may have led a fascinating life, but you wouldn’t know it from The Greatest Showman, a broad and broad-minded musical that’s closer to High School Musical than Freaks on the pop-culture scale.

Some engaging if highly anachronistic songs provide the only pep in a big-budget production that was oddly entrusted to a director whose only previous credits were helming TV commercials and creating visual effects for little-seen pictures. That might explain why Michael Gracey’s staging of the musical numbers lacks flair, finesse or even spatial symmetry. As for the script by TV vet Jenny Bicks and Dreamgirls writer-director Bill Condon, it offers only pop psychology in its look at P.T. Barnum (Hugh Jackman) as a troubled overachiever and a politically correct framework that’s ultimately at odds with the more troubling aspects of its leading character and the time in which he lived. In this film’s fantasy world, prejudice is primarily practiced by a few burly drunks hovering around the edges — certainly, little exists in Barnum, presented here as a big-top patriarch whose wispy hints of bigotry vanish whenever one of his performers belts out another Top 40 wannabe.

Zac Efron and Zendaya provide some forbidden teeny-bopper romance that further drags the picture down, while Michelle Williams is given precious little to do as Barnum’s eternally patient wife. Jackman is aptly cast in the title role, and he would have been sensational in a darker, warts-and-all interpretation of the character. Instead, he’s asked merely to coast in a splashy but shallow picture that might as well have been called American Idle.