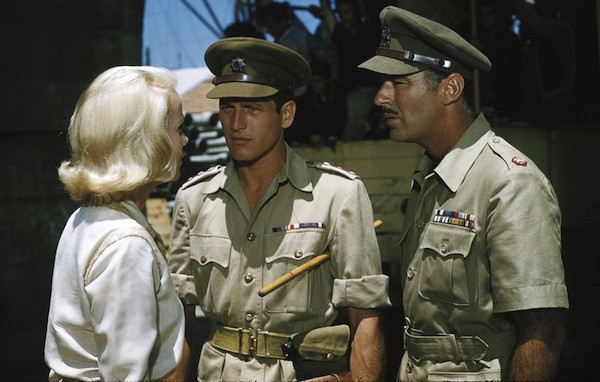 EXODUS (1960). As detailed in the best picture of 2015, the criminally underrated Trumbo (go here for a complete look at the Best & Worst Films of 2015), the heinous Hollywood blacklist was broken when two powerful filmmakers hired persona non grata Dalton Trumbo to write the scripts for their respective pictures using his own moniker rather than a pseudonym. One, of course, was actor-producer Kirk Douglas with 1960's Spartacus; the other was director-producer Otto Preminger with the same year's Exodus, the screen version of Leon Uris' gargantuan bestseller about the founding of the State of Israel. Trumbo served up two hefty screenplays full of incident, emotion and intellectual exchanges — of the pair, I much prefer Spartacus, although there's something to be said for his streamlining of so much historical content (and, yes, fictional deviations) found in Uris' bowling-ball-sized novel, as well as for Preminger's mounting of some truly impressive set-pieces. Despite his deserved ranking as one of the Hollywood greats, Paul Newman is curiously ineffectual as Haganah leader Ari Ben Canaan, and his character's romance with an American nurse (Eva Marie Saint) lacks palpable passion. The supporting players fare better, with David Opatoshu (as radical Irgun leader Akiva Ben Canaan) and Sal Mineo (as seething Irgun operative Dov Landau) emerging as the cast standouts. In the battle of the now-classic movie themes, Ernest Gold's work on Exodus earned the Best Original Score Oscar over Elmer Bernstein's achievement with The Magnificent Seven and Dimitri Tiomkin's efforts on The Alamo (the best of the year's bunch, Bernard Herrmann's score for Psycho, wasn't even nominated); the film's other nominations went to Mineo for Best Supporting Actor and Sam Leavitt for Best Color Cinematography.

Blu-ray extras consist of the theatrical trailer and an isolated track of Gold's score. 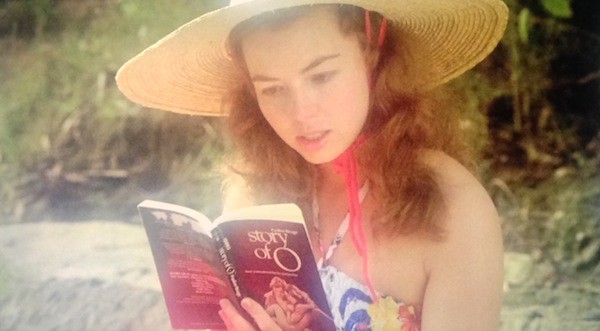 FELICITY (1978). Well before the popular American TV series Felicity, there was the Australian movie Felicity, featuring a young school girl whose idea of — ahem — cramming for her finals was quite different than that taken by Keri Russell in the television show. This Felicity is a teenager (played by 26-year-old Canadian actress Glory Annen) who experiences her sexual awakening while attending an all-girls school in England and then loses her virginity while traveling in Hong Kong. Her deflowering is followed by a succession of romps with men and women alike, until she finds herself falling for a nice guy (Chris Milne). An example of both the sort of softcore feature and the type of Aussie exploitation picture being made during the 1970s (although it registers as more of the former and less of the latter), Felicity is indistinguishable from numerous other mediocrities in this vein, but it's sure to please those who have been missing those late-night "Skinemax" features something fierce. 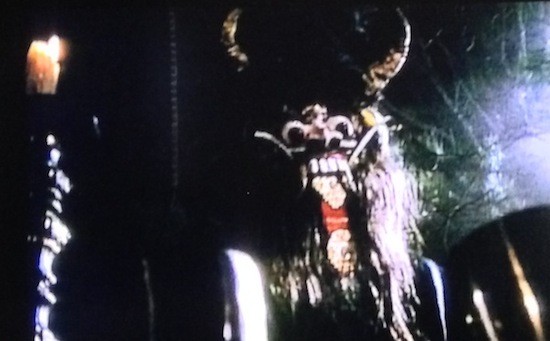 More interesting are the two documentaries included as bonuses on the Blu-ray, both helmed (like Felicity) by John D. Lamond. The 1975 effort Australia After Dark (Lamond's debut as a director) was clearly inspired by the worldwide success of the notorious 1962 "shockumentary" Mondo Cane and its subsequent imitators, as Lamond basically travels around his homeland and shoots footage of a gay wedding, a porn flick in production, a body-painting session, and a performance artist known as Count Copernicus. It's the sort of material that used to be found on HBO's Real Sex, although there are also skin-free vignettes focusing on the serious (alcoholism among Aborigines) and the sordid (death masks of criminals). The movie is ultimately an unwieldy grab bag of anecdotes, though there are some amusing bits scattered throughout.

Even better is 1978's The ABCs of Love and Sex: Australia Style, a documentary that begins and ends with an animated sequence and in between employs the letters of the alphabet to explain, well, love and sex. A is for Anatomy; C is for Contraception; H is for Homosexuality; J is for Jealousy — you get the idea. And, yes, there are scenes of people cavorting around giant letter blocks.

THE GONG SHOW MOVIE (1980). Back in the day, The Gong Show was the sort of faddish television program watched by the same type of morons who later would make hits out of such low-IQ fare as Duck Dynasty and Fear Factor. Its creator and MC was Chuck Barris, who allowed all manner of novelty acts to perform on the show, even the racy ones which caused the censors to sweat. After a four-year run, the series was cancelled in 1980, around the same time that Barris (as star, director and, with Robert Downey Sr., writer) foisted this big-screen version onto the public. Rated R to accommodate the nudity and profanity that couldn't be seen and heard on TV, it was a critical and commercial disaster, and no wonder: Following Barris around as he deals with folks clamoring to be on the show, it's less A Hard Day's Night and more a hard day's watch. The navel-gazing premise is workable — as much as I can't stand Howard Stern, he admittedly pulled off a similar ego trip with 1997's entertaining Private Parts — but The Gong Show Movie is crammed with so many desperate gags and anchored by Barris' suffocating woe-is-me routine that its only worth is as a relic of its time. Gong Show panelists like Jamie Farr and Jaye P. Morgan are on hand as themselves; Rip Taylor appears as a fussy maître d'; Tony Randall, Phil Hartman and Rosey Grier appear in bit parts; and there are uncredited cameos by Danny De Vito and Kitten Natividad. But very little makes any impression, as the acts are idiotic and the acting is insincere. Barris also contributes a handful of songs for which he wrote the music and lyrics himself — the one used during the grand finale, "Don't Get Up," is actually clever, but by that point, the picture has long been gonged into irrelevance.

The only Blu-ray extra is audio commentary by pop culture historian Russell Dyball. 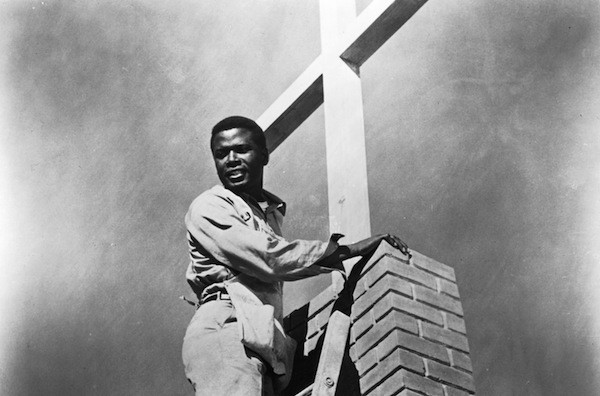 LILIES OF THE FIELD (1963). Made on a micro-budget, Lilies of the Field proved to be a substantial hit with critics and especially audiences, and it went on to earn five Academy Award nominations. Four of those bids came in the categories of Best Picture, Supporting Actress (Lilia Skala), Adapted Screenplay and Black-and-White Cinematography, but all eyes on Oscar night were on Best Actor, where Sidney Poitier stood a good chance of becoming the first black male to ever win an acting award (and second black performer overall, after Gone with the Wind's Hattie McDaniel). As Poitier himself quipped before the ceremony, "What if eight million Negroes decide to kick in their TV screens at the moment someone else's name is called? Besides, I want to win because they think I'm a good actor." No worries on any of those accounts: Poitier did win, TV screens remained undamaged, and the actor's performance was certainly worthy of the prize. He's absolutely ingratiating as Homer Smith, a drifter who reluctantly agrees to help five German nuns build a chapel out in the middle of Nowhere, USA. Homer's joviality is often at odds with the strict demeanor of the head nun, Mother Maria (Skala), but their mutual respect is never in doubt. There's not much dramatic urgency to the story (scripted by James Poe from William E. Barrett's novel), but that's perfectly fine: This is the sort of picture that gives wholesomeness a good name, and its life lessons are imparted in a leisurely and unforced manner. The camerawork by Oscar-winning veteran Ernest Haller (Gone with the Wind) is more artful than might be expected, and the great Jerry Goldsmith contributes a delicate score that hits all the right notes.

THE PURPLE PLAIN (1954). The 100th anniversary of Gregory Peck's birth (he passed away in 2003, at the age of 87) occurred earlier this week, and Turner Classic Movies honored the occasion by presenting a dozen of this legendary star's films. The Purple Plain wasn't included in the line-up, but it is newly released on Blu-ray. A British production that was far more popular in its homeland than in the U.S. — it was a box office hit in the U.K. and earned four BAFTA nominations, including one for Best Film — it contains a typically excellent performance by Peck, the sort that demonstrates why he's been my favorite actor since I was a young boy lo those many decades ago. Peck stars as Bill Forrester, a WWII squadron leader who's lost the will to live ever since his wife was killed during the London Blitz on their wedding night. Forrester's irrational behavior and death-defying acts have left everyone around him wary, but a kindly doctor (Bernard Lee, eight years before assuming the role of M in the James Bond franchise) attempts to jump-start his humanity by introducing him to a local Burmese beauty (Win Min Than). It works, so when Forrester and two colleagues, the injured Carrington (Lyndon Brook) and the whiny Blore (Maurice Denham), find themselves stranded behind enemy lines, it's Forrester who leads the charge in attempting to survive the punishing heat and rugged terrain and make it out alive. Despite its wartime setting, this isn't an action yarn as much as it's an astute character study of a damaged individual — as such, it makes an interesting companion piece to Peck's WWII classic Twelve O'Clock High.

Blu-ray extras consist of the theatrical trailers for On the Beach (starring Peck), Billy Two Hats (ditto), and The Wonderful Country (with Robert Mitchum and, in his only acting appearance, baseball great Satchel Paige). 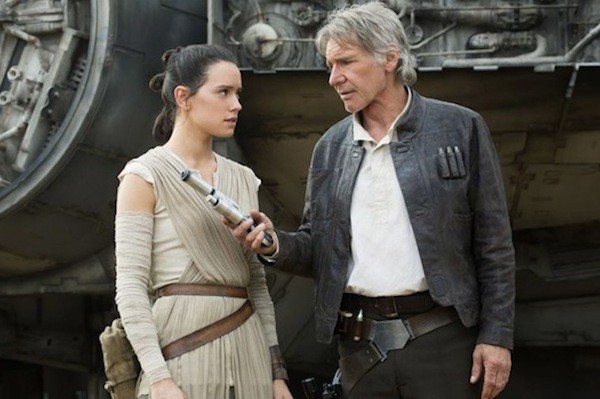 STAR WARS: THE FORCE AWAKENS (2015). The film's first line, glimpsed in that now-iconic opening scrawl that fades into the background, reads, "Luke Skywalker has vanished." And with that, this deserving global smash begins to work its magic, by bringing back many familiar faces (including Harrison Ford as Han Solo and Carrie Fisher as Leia) and introducing several new figures (primarily Daisy Ridley and John Boyega as reluctant heroes Rey and Finn, Oscar Isaac as cocky fighter pilot Poe Dameron, and Adam Driver as the villainous Kylo Ren). These characters are indicative of the respect writer-director J.J. Abrams and co-scripters Lawrence Kasdan (who also co-penned The Empire Strikes Back, Return of the Jedi and Raiders of the Lost Ark) and Michael Arndt pay toward the past, present and future of the franchise. All of the story's ties to the original trilogy are measured and make sense, and there are also some visual cues to its predecessors. As for the veteran actors, they haven't lost a beat with their characterizations, while the newcomers prove to be irresistible. Yet perhaps the strongest component is the Oscar-nominated visual effects work — that may sound like a no-brainer, but after the prequels, it's anything but. The effects in those movies were often excellent, but the absolute reliance on CGI stifled much of the wonder and left viewers grousing about the artificiality of it all. With The Force Awakens, Abrams has graciously patterned the look after the 1977, '80 and '83 efforts, with many of the visuals created with models (as opposed to computers) and actual earthbound locations (as opposed to green screens). It's a noble and appreciated gesture, and it's enough to make a grown fan cry.

Blu-ray extras include a making-of documentary; deleted scenes; a piece on the droid BB-8; and a featurette on John Williams (who earned his 50th Oscar nomination for this film's original score).

View from the Couch film review View From The Couch Blu-ray DVD Matt Brunson Exodus Felicity Australia After Dark The ABCs of Sex The Gong Show Movie Lilies of the Field The Purple Plain Star Wars: The Force Awakens