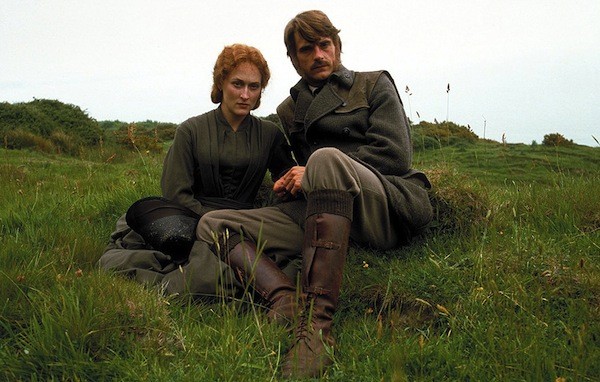 THE FRENCH LIEUTENANT'S WOMAN (1981). Like Milan Kundera's The Unbearable Lightness of Being and Michael Ondaatje's The English Patient, John Fowles' The French Lieutenant's Woman was one of those literary classics that was deemed unfilmable, and even such cinematic heavyweights as Milos Forman, Sidney Lumet and Mike Nichols couldn't get a handle on how to tackle it. It finally fell to director Karel Reisz (Fowles' own choice to helm the project) and writer Harold Pinter to bring it to the screen, and the result is a lush period drama that also manages to criticize outmoded patriarchal standards. The main body of the film relates the Victorian-era romance between Charles Smithson (Jeremy Irons), an earnest scientist of good standing, and Sarah Woodruff (Meryl Streep), a societal outcast scandalized by her involvement with a long-departed French officer. To this sturdy framework, Pinter ingenuously adds a second narrative not found in the novel, a modern-day saga in which Mike and Anna (also Irons and Streep), actors cast in a screen-version of The French Lieutenant's Woman, carry out their own illicit affair. The contemporary thread offers an interesting parallel to the period material, particularly in delineating the ways in which women might have it better now but must also remain mindful of many of the same issues. Streep and Irons are both excellent, as are Leo McKern as a well-meaning doctor and Lynsey Baxter as Charles' spoiled fiancée Ernestina, as trapped by the dictates of her time as Sarah. This earned five Academy Award nominations, including Best Actress for Streep, Best Adapted Screenplay for Pinter, and Best Film Editing for John Bloom.

Blu-ray extras include new interviews with Streep, Irons and Bloom; a discussion with film scholar Ian Christie; a 1981 episode of The South Bank Show in which Fowles, Pinter and Reisz discuss the movie; and the theatrical trailer. 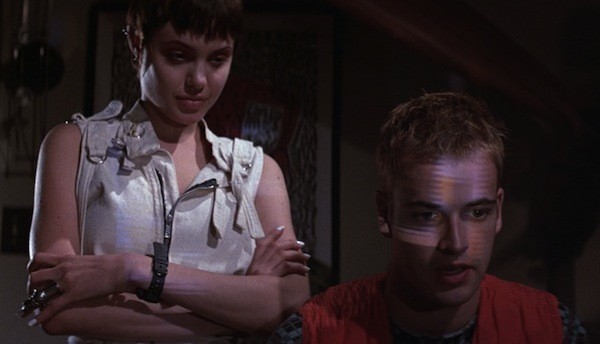 HACKERS (1995). In a manner similar to that of 1982's Tron predating the obsession for CGI in entertainment, so did 1995's Hackers offer an early peek at the online world shortly before the global explosion of the Internet. But the comparison doesn't end there, as both films find that even their cutting-edge ideas can't quite compensate for a banal storyline. Jonny Lee Miller and Angelina Jolie landed their first significant screen roles in Hackers, respectively playing Dade (aka Zero Cool, aka Crash Override) and Kate (aka Acid Burn). They're high school students who, along with their hacker buddies Cereal Killer (Matthew Lillard, in the first of his countless roles as an insufferable sidekick), Lord Nikon (Laurence Mason), The Phantom Phreak (Renoly Santiago) and the handle-less Joey (Jesse Bradford), are framed for a cybercrime by The Plague (Fisher Stevens), a computer security expert attempting to create a distraction from his own embezzling scheme. A flop upon its initial release, the film has achieved ever-so-slight cult status thanks to its working knowledge of computer technology (several real-life hackers served as consultants), its engaging effects (most created without CGI) and a pulsating soundtrack. But the heroes remain hopelessly bland, while Stevens' master villain exudes about as much menace as a pampered poodle.

Blu-ray extras consist of a three-part, hour-long retrospective featurette and the theatrical trailer.

THE MONSTER THAT CHALLENGED THE WORLD (1957). Giant mollusks as monsters? It sounds like perfect MST3K fodder, but the truth is that The Monster That Challenged the World is a fairly nifty '50s treat, with an intelligent script and decent effects (more so given its low budget). The title is a misnomer, since there's more than one monster and the only area being challenged is around the Salton Sea in California. Amusingly, the picture begins like Jaws, with a nautical creature killing unsuspecting swimmers and those in charge ordering the closing of the beaches amidst grousing from some locals. It's soon revealed that the culprits are giant mollusks that have been released via earthquake from a crack in the San Andreas Fault resting beneath the sea; since Dwayne Johnson wasn't even born yet in 1957, it's up to a naval officer (Tim Holt) and a scientist (Hans Conried) to figure out a way to stop the creatures. The characters are strictly one-note, even though there's a rudimentary effort to flesh them out (Holt's military man courts a single mom played by Audrey Dalton) — the monster moments, however, are effectively staged by Arnold Laven (who would become a prolific TV director, tackling episodes of everything from Ironside to The A-Team). If Holt looks familiar, that's because this "B" Western star occasionally found himself in a genuine classic on the order of Orson Welles' The Magnificent Ambersons, John Ford's My Darling Clementine and John Huston's The Treasure of the Sierra Madre — he would die at a fairly young age, taken by cancer at 54.

THE PEOPLE UNDER THE STAIRS (1991). Or The Script Under the Coffee Cup, as one would assume that Wes Craven's pitiable screenplay went through many hands and sat on many kitchen tables before some executive at Universal Pictures figured, "What the hell; maybe some bored teens will come check it out." Brandon Adams plays "Fool," a young boy whose family is being evicted by the heartless landlords, the Robesons (Twin Peaks alumni Everett McGill and Wendy Robie). Needing money for his mom's surgery, Fool reluctantly breaks into the Robesons' house alongside a pair of small-time hoods (Ving Rhames and Jeremy Roberts), whereupon he learns that the crazy couple (who call each other Mommy and Daddy) keep a horde of children they've kidnapped and mutilated in their basement. With the help of the Robesons' abused daughter Alice (A.J. Langer) and Roach (Sean Whalen), a teenager who lives within the walls, Fool tries to escape from this house that's built like a prison fortress. As with most Craven images, this one suffers from lackluster performances, a clumsy screenplay, a campy tone, and a noticeable lack of suspense. Upon its original release, the studio laughably pushed the notion that this was a powerful indictment of the Reagan '80s, which is as ludicrous as stating that the Fast & Furious films are cautionary tales warning against the dangers of fast driving.