Posted on a block

Looking back now, there are multiple ways the Great Recession, which officially ended in 2009, helped bring the food truck culture to Charlotte in 2011, eventually leading to its rapid growth in the years following.

Dave Stuck moved to Charlotte from Portland, Oregon, where he had worked in the restaurant industry in late 2009. He worked multiple restaurant jobs in Charlotte but, come 2011, he was ready to branch out on his own. Banks, however, weren't willing to hand out loans during the precarious recovery from what the country had just been through. Food trucks, plentiful in Portland, proved more affordable and Stuck went that route, founding The TIN Kitchen and hitting the road in his big silver truck.

Karen Trauner, co-founder of Sticks and Cones Ice Cream, bought the company's original Sticks ice cream truck with her husband Dave in 2010 after he became worn out by the stigma of working for Bank of America during the recession.

"He was in the banking field in a time when people weren't happy with the financial situation, so he got yelled at a lot," Trauner says. "In an ice cream truck you never get yelled at, people are always really happy to see you. They chase you down waving money at you and it's fun. It was a fun business."

The couple soon saw a few food trucks appearing around town and knew immediately that they wanted to be a part of the fledgling industry. Their traditional ice cream truck couldn't hang with originals like Brian Seeley's The Herban Legend, who was setting up shop at different spots around Uptown at the time, so they bought a second "Cones" truck and began serving soft-serve.

In January 2012, Seeley created the now-famous Food Truck Friday event, gaining permission from landowner Gaines Brown to use the lot at the corner of Park Avenue and Camden Road and inviting Stuck and the now-defunct Goody Woody's truck. Within the first month, three more trucks, including the Trauners, had joined.

It was the birth of something that would change the way Charlotte looked at "eating out," but it was hard to tell at the time.

"It was terrible," Stuck says of those first few months of winter rallies. "We would sit out there and feed 12 people; it just sucked. I remember sitting there just thinking, 'Oh my God, what do we do? Why did I buy this truck? Nobody gets it.'"

Even as the weather warmed up, people still weren't catching on to the idea. Stuck became demoralized and came close to giving up. As he and Seeley hung around the lot following another failed rally one Friday night, Stuck announced he was ready to sell the truck and try something else.

"I was like, 'This sucks. I think I'm going to sell this thing because it's a waste of my time,' and Brian said, 'Well, just come out next week and we'll see,'" Stuck says. "Then it just took off the next week. It started slowly growing. We would bring enough food for 50 people and have 70 come. Then we'd bring enough for 70 and have 90. It was exponential, like it went viral and it turned into this monster. Obviously, it turned out great." 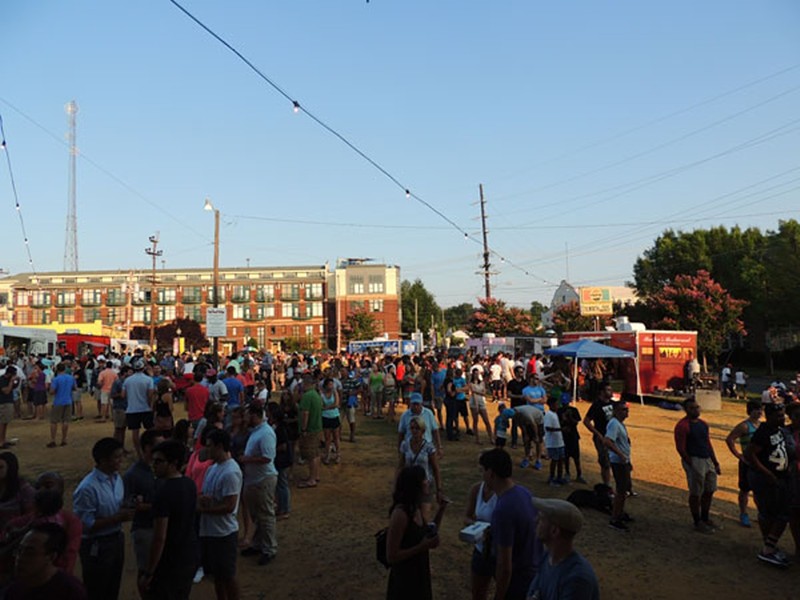 When Seeley first began parking The Herban Legend outside of Johnson & Wales University campus in early 2011, it was a bit of a rogue operation. He's since sold his truck and moved to St. Croix in the Virgin Islands, but speaking over the phone from there, he recalled the struggles of being one of the first food truck vendors in Charlotte.

Laws on the books prohibiting food trucks from doing business within 150 feet of an eatery or bar made it difficult to operate in Uptown Chrlotte at the time. The regulation could also affect Seeley's business outside of certain breweries, an industry that began burgeoning just a year or so before food trucks. Since breweries rarely sell food, partnerships between breweries and food trucks had the potential to help pull vendors like Seeley up along with them.

"NoDa and Triple C [breweries] both started at the same time as I did," Seeley said. "We all grew that business from there. That regulation would've killed the brewery business."

Seeley simply kept his head down and continued to work with a low profile. Zoning laws aren't usually enforced unless someone complains, and there were no complaints from brewery owners, food truck vendors or hungry customers.

"I grew my business pretty quickly and began turning a profit in three months," he says. "I just grew those spots, and as other trucks came out on the scene I did whatever I could to help them out and pioneer new spots and get everybody on the same page as far as flying under the radar and not getting kicked out of spots or creating a problem with traffic. By the time the first six months had rolled around, a few more trucks were around. We were all just kind of making it happen and gaining buzz."

That buzz eventually grew too loud to be ignored, and the antiquated laws regulating food trucks had to be addressed. In 2013, vendors began participating in citizen advisory meetings with city staff that went well into the next year.

In January 2015, the city proposed new regulations that allowed vendors to file for broader permits, loosened restrictions on times of operation and shortened distance buffers between trucks and eateries, as well as other trucks.

"[The city is] trying to figure out the best way to do this and be supportive — and I do think they're trying to be supportive — but I think they also want to get paid," Stuck says. "But for whatever reasons, the thoughts the city had about food trucks have changed, and they started seeing this as a positive."

The last Food Truck Friday at the original location was held in October 2015, but the rally's future was only in question for a short time. Organizers who had helped run the event since Seeley's retirement began looking for new locations, and the community was more than ready to help. Soon, two new rallies had split off from the event and are now held on opposite sides of the city.

In South End, Justin and Sarah Brigham, co-owners at Sycamore Brewing, now host about six to seven trucks at a new Food Truck Friday. Stuck doesn't run the new event, but consults with the Brighams and schedules trucks. He says the 450 to 500 customers he serves each Friday is more than his average at the original rally. He sometimes brings two trucks out, with one running an experimental menu.

"It really is the next evolution of Food Truck Friday in South End," Stuck said. "They have a lot of the stuff we never had; trucks are still there but now there's cornhole boards, more tables, live music, local beer. It was awesome before but it's evolved into that next step."

Karen Trauner said she received calls from businesses and landowners throughout Charlotte offering spots for a new Friday rally when news broke that the original lot would be sold. After researching a few of the potential locations, she and Dave decided to set up shop behind The Light Factory on Central Avenue.

Trauner says Food Truck Friday in Plaza Midwood has been successful since it began, an overhwhelming surprise at first. During the second week in Plaza Midwood, she booked only nine trucks and watched in horror as crowds of people had to wait up to two hours to get fed. She now schedules 13 trucks every week and said it's been a good balance.

She launched CharlotteFoodTrucks.org in 2012 and uses an online scheduling system she created during the original South End days to book trucks for each rally she runs through her business, Eat From a Truck. 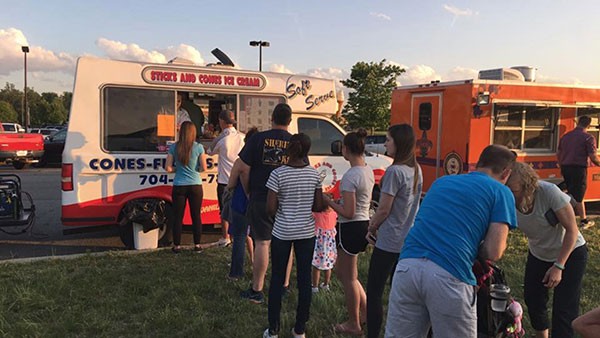 Events Trauner has started this summer include monthly Saturday night rallies in Steele Creek, Harrisburg and Prosperity Village. She estimates she spends about 60 hours a week on the computer organizing all of the rallies.

"At the beginning, when you first set up the schedules, it's a tremendous amount of work with collecting the paperwork, getting the schedules together, things like that," she says. "I enjoy it. I do make money because I'm always booking my truck there, in the best places to go. I do collect a fee from each truck [at the rallies], but I spend that money on police, garbage, bathrooms. It's not a money-making thing. My basic thrill out of it is that I get to go. Nobody else gets to go as often as I do and that's my gift to myself."

Now, with every Food Truck Friday in Plaza Midwood and nearly all of her monthly rallies fully booked through the season, Trauner is setting her sights on the regional record books. The Eat From a Truck Food Truck Fair, to be held in September, (full disclosure: Creative Loafing is a major sponsor) aims to be the largest food truck rally in the Carolinas' history.

Trauner plans to have 100 food trucks on site at the AvidXchange Music Factory, including trucks from Charlotte, Raleigh, Durham, Greensboro, Asheville, towns in South Carolina and even Georgia.

"That's been something I've been thinking about for a while, but as it happens, I didn't know where to do it," she says. "It was one of those calls when the South End lot closed, one of the people who got in touch was Ken [Thomas] from the Music Factory asking, 'Can we do anything out here?' That's when I realized it would be a great location for something massive. Even if we couldn't get out there on a regular basis, this one-time big thing would be perfect out there, so we're totally psyched to do that."

Despite the struggles once faced by those pioneers who started it all, the ones who stuck around have won the fight and now sit at the top of a booming game.

"All of us that started early had the vision that it could be something worth doing to make a little money and I don't think any of us expected it to blow up the way it did," Seeley says. "It's just one of those cool little cult-following things that blew up and went mainstream. If I got back in [Charlotte], I wouldn't take on as much, but I would definitely do it again."

When asked if that's something he sees in his future, he laughs, Virgin Island wind blowing through the receiver.

"No man, definitely not. It's just too beautiful down here," he says.

At least he left a great culture behind for the rest of us.