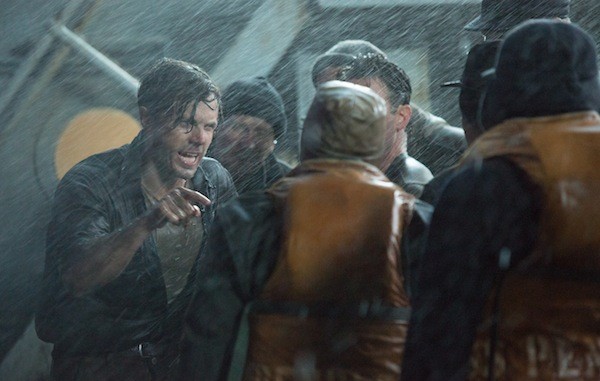 Legendary tales of torturous shoots and skyrocketing budgets from the sets of The Abyss, Waterworld and Titanic lent enormous weight to the belief that it's extremely difficult to make a movie set on water. Lately, though, it's been a chore simply to watch a movie set on water.

The Finest Hours, starring Chris Pine (James Kirk in the new Star Trek series), follows on the heels of this past December's In the Heart of the Sea, starring Chris Hemsworth (James Kirk's dad George in the new Star Trek series). If this latest effort isn't quite as cinematically waterlogged as that muddled look at the real-life incident that led to the writing of Moby-Dick, it also never really makes its case that it's the best possible vehicle with which to honor what is commonly regarded as one of the Coast Guard's greatest achievements (indeed, the book on which the film is based is subtitled The True Story of the U.S. Coast Guard's Most Daring Sea Rescue). Instead, it's entirely likely that a History Channel documentary relying heavily on vintage photos and talking-head interviews of those involved with the 1952 rescue would have been more emotionally stirring than this production which stolidly goes through the motions. Hagiographic depictions are often inspiring in nonfiction features, but in multiplex dramatizations, they skew toward unimaginative and overbearing.

I haven't read the source novel penned by Casey Sherman and Michael J. Togias, so I guess it's possible that real life provided the numerous concessions to cliché and formula presented by director Craig Gillespie and his trio of scripters. If it did, then the filmmakers fail for not goosing the material in interesting and unexpected ways; if it didn't, then they fail for flatlining potentially intriguing material. Only Ray Sybert, the engineer aboard an oil tanker that's been split in two, feels like a character rather than a concept, and that's largely due to the thoughtful manner in which Casey Affleck plays the role. Otherwise, we get such standards as the earnest Coast Guard sailor (Pine as Bernie Webber) who was at the center of a past nautical tragedy and must now redeem himself by saving those aboard the tanker; the gruff officer (Eric Bana) who barks out one dubious command after another; the obnoxious crew member whose ceaseless complaining grows (unintentionally) comical; the all-around nice guy who, because he's the gosh-darn nicest guy around, will invariably be subjected to the most gruesome fate; and so on.

The subplots prove to be as rigidly conceived as the people, from a muted romance between Bernie and his sweetheart (human kewpie doll Holliday Grainger) to the mumbling townspeople who still blame Bernie for the bad Massachusetts weather that killed their loved ones. And then there are the expected hurdles that make the rescue of the tanker crew even more difficult, including the howling storms, the pounding waters, dissension among the ranks, an undersized rescue vehicle, the lack of a navigational compass, and an inopportunely timed power outage. Indeed, the only element missing is a monstrous, Jules Verne-approved squid to drag various seamen to their watery graves some 20,000 leagues under the sea.