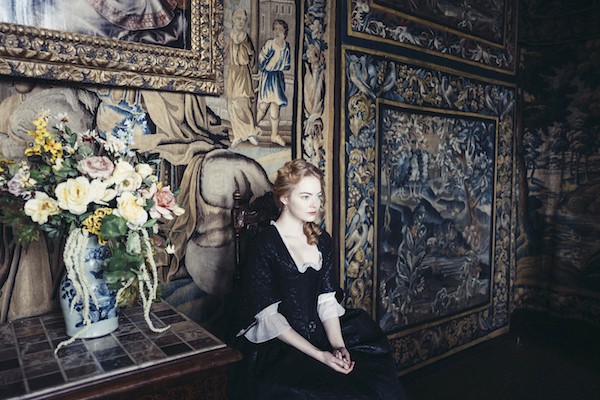 The Favourite (***1/2 out of four) is basically All About Eve with corsets, with Rachel Weisz starring as Bette Davis’ Margo Channing, Emma Stone cast as Anne Baxter’s Eve Harrington, and Olivia Colman appearing as the Sarah Siddons Award.

Set during the kickoff of the 18th century, this historical seriocomedy unfolds in the court of Queen Anne (Colman), a sickly ruler who would rather spend time with her pet rabbits than deal with pesky politics or the fog of war that envelops England’s ongoing battle with France. For such matters of state, Anne relies on Sarah Churchill (Weisz), who’s not only the ruler’s confidante but also her lover. But there’s a palace uprising of sorts with the arrival of Abigail Hill (Stone), a former lady of high society who, through no fault of her own, has now fallen on hard times. Abigail appears to be all sunshine and light as she joins the royal staff as a maid, but it’s not long before Sarah becomes aware of her Machiavellian maneuverings.

Those expecting a staid and stuffy period drama will be taken aback by the outrageousness that The Favourite displays not only in word but in deed. With all manner of shady characters flitting around in the background (Nicholas Hoult, the young Beast in the X-Men films, is a hoot as the supercilious landowner Robert Harley), the picture isn’t lacking for intrigue, and the exceptional screenplay by Deborah Davis and Tony McNamara is filled with dialogue that cuts like daggers. Colman is aptly pathetic as the grasping queen, Stone uses her kewpie-doll mannerisms to chilling advantage, and Weisz is typically superb as she embraces all sides of her richly textured character. Indeed, it’s Weisz’s Sarah who ultimately reveals that The Favourite is as much of a poignant love story as it is a historical drama or acerbic comedy.

Could the ending be stronger? Certainly. In fact, this seems to be a recurring problem with director Yorgos Lanthimos and the English-language films he helms (previously, The Lobster and The Killing of a Sacred Deer). I do suspect that repeated viewings might allow its abruptness to feel more in line with the rest of the swerves found in this dazzling drama — at any rate, 120 seconds hardly erase the splendors of the other 120 minutes. The Favourite is one of the best films of 2018, and it’s a sure favorite — excuse me, favourite — as we head further into award season.