The Fault in Our Stars shines bright 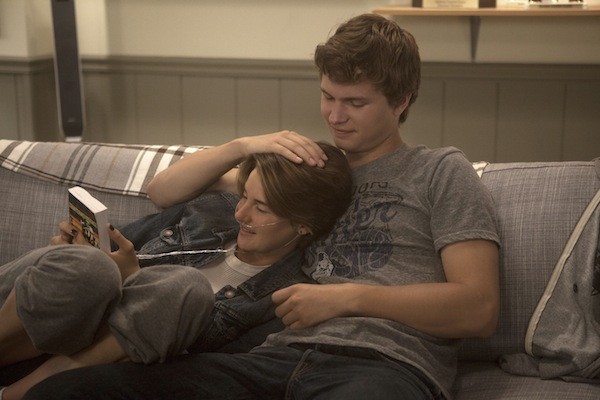 While theaters have been providing 3-D glasses as moviegoers amble into enhanced showings of such hi-tech flicks as Godzilla and Edge of Tomorrow, they're offering no handouts at venues screening The Fault in Our Stars. That's a blown opportunity for the chance to make an extra buck, because if the steady sniffling of the audience surrounding me at the film's advance screening is any indication, then legions of viewers will be requiring a stack of Kleenex long before the end credits roll.

Heck, I could have benefited from a couple myself, if only to blot eyes that watered up on more than one occasion. Movies about sickly young people tend to strand discerning film fans far from the intended effect, since dry eyes or involuntary chuckles are more likely to greet the melodramatic claptrap foisted upon the screen. But The Fault in Our Stars, based on John Green's acclaimed 2012 best seller, is different: It treats its characters as recognizably human individuals rather than symbolic pawn pieces, and it hooks us with its mix of strong dialogue, restrained direction and powerhouse performances.

Shailene Woodley, matching her spectacular turn in last summer's The Spectacular Now, stars as Hazel Grace Lancaster, a 16-year-old whose cancer has left her unable to properly breath without her portable oxygen tank in tow. A smart and strong-willed teen, the last thing she wants to do is spend potentially limited time attending support group meetings, but at the insistence of her mother (Laura Dern), she finally acquiesces. And a good thing, too, since it's at one of these meetings that she encounters Augustus "Gus" Waters (Ansel Elgort), a self-assured boy who lost a leg to cancer and now sports a prosthetic one. Gus and Hazel both benefit from loving and supportive parents, yet what they really require is one another, someone who can understand firsthand the fears and difficulties that they each face daily. For her part, though, Hazel wants to keep some distance, as she doesn't desire to see anyone else hurt by her tragic life circumstances. Gus naturally balks at her decision, and they eventually make the transition from best buddies to consummate soulmates.

Naturally, cancer will again rear its hideous head at some point over the course of the film, but the script by Scott Neustadter and Michael H. Weber (the pair who wrote (500) Days of Summer and the aforementioned The Spectacular Now) is too intelligent to telegraph its moves or allow the drama to fall into predetermined place. One of the highlights of the picture is when Hazel and Gus travel to Amsterdam to meet Peter Van Houten (Willem Dafoe), the author of Hazel's favorite book, and their meeting isn't quite what one might expect. Instead, the emotions that are unleashed are raw, startling and even terrifying, and they provide an unease not even attempted in other films of this nature (certainly not junk like Sweet November or Autumn in New York).

Even with its blanket richness, The Fault in Our Stars won't draw viewers who dismiss out of hand anything dealing with palpable emotions (I expect online fanboys to bash it as if it were a Twilight sequel, even as they purchase tickets for the next Transformers flick). But admittedly, one person's soul-rattling catharsis might be another's Hallmark greeting card, meaning even open-minded viewers might not catch its wavelength. Fair enough. There's one line of voiceover, taken from Green's novel, that struck me as particularly memorable: "I fell in love the way you fall asleep: slowly, and then all at once." If this line strikes you as so much treacle, skip the film with my blessing. But if it speaks to you, then better pocket that handkerchief before heading to the multiplex.

The Fault in Our Stars