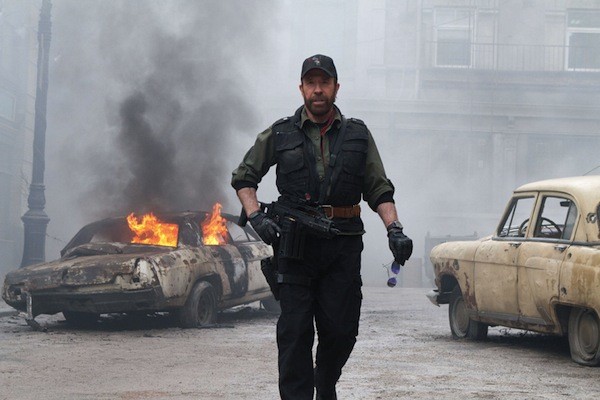 The best thing about The Expendables 2 involves Chuck Norris. I don't mean his performance — he's as awful as ever, showing even less range than a mattress pad — but rather that his character manages to work in one of those popular "Chuck Norris Internet facts" that have led to his renewed popularity (e.g. "Chuck Norris drinks napalm to quell his heartburn"; "Chuck Norris counted to infinity ... twice"). I won't ruin the Norris "fact" used in the film, but it provides one of the few genuine laughs, and it's certainly better than the forced wisecracks centering around past iconic figures created by co-stars Sylvester Stallone, Bruce Willis and Arnold Schwarzenegger.

A marginal improvement over the first Expendables romp, this sequel offers expanded roles for Willis and Schwarzenegger (whose appearances in the previous film amounted to nothing more than cameos), casts another 80s action star as the villain (Jean-Claude Van Damme as ... groan ... Jean Vilain), and, perhaps in a dubious attempt to expand the audience beyond action-crazed young males, adds group newcomers in the form of a pinup heartthrob (The Hunger Games' Liam Hemsworth) and a kick-ass woman (Nan Yu). The team's mission is twofold: Stop Vilain from using his plutonium supply to conquer the world and exact their revenge on said villain for murdering one of their own.

Director Simon West's action flicks tend to be cluttered, choppy affairs (Lara Croft: Tomb Raider, Con Air), and The Expendables 2 is no exception. As the team leader and his right-hand man, Stallone and Jason Statham awkwardly exchange male-bonding barbs. One of the franchise stars appears only at the beginning, leaving audiences to wonder if he was downed by pneumonia for the rest of the shoot. Schwarzenegger, whose Botoxed mug makes him look like a CGI creation, lamely tries on Willis' signature "yippee-ki-yay" and finds it to be an ill fit (Willis fares better with Arnie's "I'll be back"). And so it goes.

The movie is, at best, average as a straight-up action flick and subpar as an action spoof, but it succeeds in one regard. Conservatives upset that they can't afford to attend the Republican National Convention in Tampa can purchase a ticket to this picture at their local multiplex and basically enjoy the same experience. Watching diehard right-wingers Willis, Schwarzenegger, Norris and Stallone shooting up everything in sight, one can easily imagine both the anti-Obama cracks and pro-NRA comments that were doubtless being tossed about when the cameras weren't rolling.