The Equalizer: And Justice for All | Reviews | Creative Loafing Charlotte

The Equalizer: And Justice for All 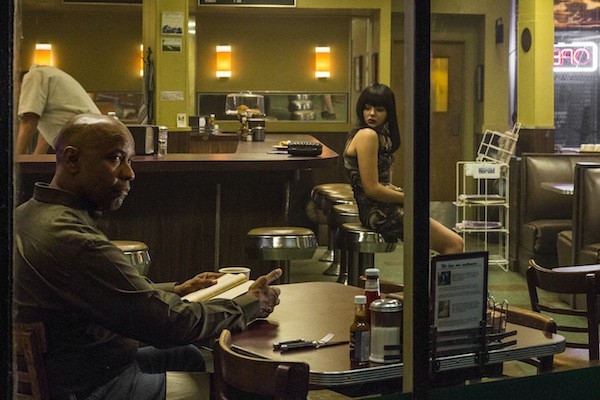 Edward Woodward's primary claim to fame — at least among cineastes — remains his starring role in the macabre 1973 classic The Wicker Man (remade, as we all know, as a bad Nicolas Cage vehicle that in turn led to a great YouTube compilation clip). Yet the British actor enjoyed greater stateside prominence for his hit TV series The Equalizer; running for four seasons (1985-1989), the show found him essaying the role of Robert McCall, a former government agent employing his impressive skills to help out those too weak and powerless to fight for themselves.

In the new film version, also called The Equalizer, Robert McCall has been reborn in the personage of Denzel Washington. At first glance, it seems like a role that could have been filled by Liam Neeson, who's been a veritable one-man factory when it comes to churning out movies in which a reticent outsider lays waste to a sizable number of despicable crooks who sport absolutely no redeeming values whatsoever. Yet Washington has also found himself in similar roles on occasion, and he brings enormous reserves of brains, brawn and bravado to this latest assignment.

Washington's Robert McCall is first shown working at Home Mart, a supply store not unlike Lowe's or Home Depot. Respected by everyone, he nevertheless keeps mostly to himself — that's especially true when he's off the clock, as he frequents a local diner where he can read quietly while sipping his tea. He does make small talk with another regular customer, a too-young call girl named Teri (Chloë Grace Moretz). He can easily surmise that her vocation isn't exactly what this Russian immigrant had in mind for herself — that becomes even more clear after she's brutally beaten by Russian thugs who control her very existence. Realizing he can no longer stand idly by, McCall taps into his long-buried past to help him with this present situation. But the Russian crime syndicate will brook no interference or opposition, so they turn to a brutal enforcer (Marton Csokas) to take care of this mysterious man of action who has suddenly appeared on the scene.

The Equalizer is about as subtle as a nail gun shot to the temple, with McCall worthy of sainthood and the villains worthy of being Satan's emissaries on Earth. But who wants subtlety when one can bask in the glory of Denzel Washington obliterating remorseless degenerates left and right? Like such Neeson vehicles as Taken and the current A Walk Among the Tombstones, The Equalizer isn't a film for those seeking moral ambiguity or thought-provoking shades of gray. It's cinema as catharsis, allowing ordinary people weary of living in a world run by vile criminals and corrupt cops the fantasy of seeing a sentient superman righting all wrongs on their behalf. Pimps and other like-minded creeps who prey on women represent just about the worst that humanity has to offer, so when McCall stabs one in the throat or breaks another one's neck (yes, this movie is extremely violent), no one in the auditorium will shed a tear. But some might cheer.