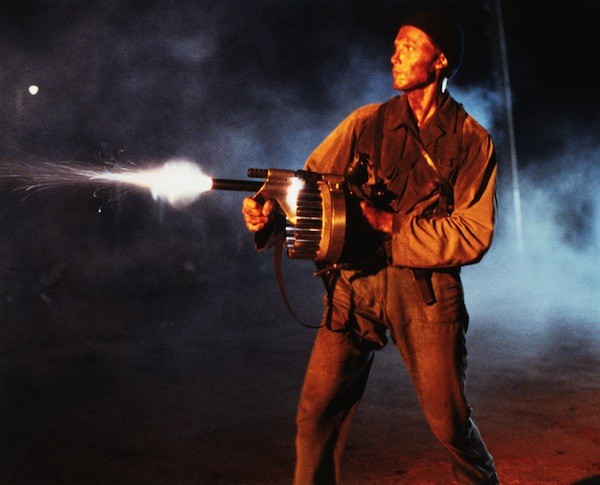 THE DOGS OF WAR (1980). Two years removed from his Oscar-winning supporting turn in 1978's The Deer Hunter, Christopher Walken landed his first starring role in this accomplished adaptation of Frederick Forsyth's bestselling novel. Walken plays Jamie Shannon, a mercenary hired by slimy British businessman Endean (Hugh Millais) to embark on a reconnaissance mission to the African nation of Zangaro. Endean would like to know if it would be possible to overthrow Zangaro's corrupt government and install a different regime — one equally corrupt, of course, but more willing to share the nation's valuable resources (platinum as opposed to oil) to outsiders. Upon returning from his assignment, Shannon is then hired to assemble his team and pull off the coup, but he has his own idea on how matters should pan out. Walken has rarely delivered such an earthy, physical performance, and his character gives (the glass-in-the-mouth scene is swift, brutal and incredible) as well as he takes (Leonard Maltin once amusingly noted that "Walken takes a screen beating nearly as impressively as Brando"). Colin Blakeley is excellent as a tenacious news reporter who befriends Shannon, and if Derek, one of the key mercenaries, looks familiar, that's because he's played by Paul Freeman, who would memorably combat Indiana Jones as the charming Belloq in the following year's Raiders of the Lost Ark. And it's difficult to ascertain which is more startling: the sight of an impossibly young Jim Broadbent (as part of Blakeley's film crew) or an impossibly young Ed O'Neill (as part of Walken's outfit).

The Blu-ray contains both the 119-minute international version of the film (which, among other additions, features more screen time for JoBeth Williams as Shannon's ex-wife) as well as the 104-minute U.S. theatrical cut. Extras consist of the original trailer and an isolated track of Geoffrey Burgon's score. 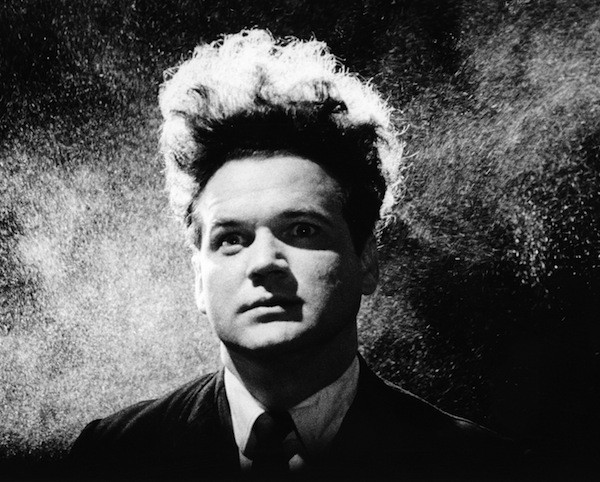 ERASERHEAD (1977). David Lynch's feature-film debut is one of those seminal movies — like Welles' Citizen Kane, Bergman's The Seventh Seal and De Sica's The Bicycle Thief — that alerted me at a young age as to the infinite possibilities that cinema had to offer. This one-of-a-kind picture doesn't push the envelope — it shreds it entirely. One of the defining "midnight movie" cult flicks and a favorite of filmmakers as varied as Mel Brooks, Gaspar Noé and the late Stanley Kubrick, Eraserhead defies easy analysis, with even Lynch himself refusing to elaborate on the story as he prefers to let viewers work it out for themselves (the most he'll allow is that it's "a dream of dark and troubling things"). Jack Nance, a Lynch regular until he died following a street brawl in 1996, plays Henry, a spooky man who's forced to marry his girlfriend, Mary X (Charlotte Stewart), after she gives birth to their baby, a hairless grotesquerie that remains swaddled on the dresser top and cries incessantly. Henry is forced to look after the baby by himself after Mary X walks out, but he's frequently distracted by visions of the Lady in the Radiator (Laurel Near), a unsightly woman who sings that "In Heaven, everything is fine" (a song later covered by Devo, The Pixies and Faith No More, among others) while crushing sperm-like creatures under her heels. And what to make of the Man in the Planet (Jack Fisk), a horribly scarred person who sits quietly by a window pulling a large lever? Seeped in sexual imagery, Eraserhead appears to be a look at the difficulties of both relationships and parenthood, but that's merely skimming the surface of this strange work that excels in contradictions: It's equally hideous and beautiful, at once inviting and repellent, both sympathetic and derisive toward its characters. Industrial sounds, a mainstay in the Lynch canon, play a prominent role in this picture, with the aural assault courtesy of future Oscar-winning sound editor Alan Splet (The Black Stallion). Trivia aside: Sissy Spacek, Fisk's wife, helped out on the set and receives a "special thanks" during the closing credits. 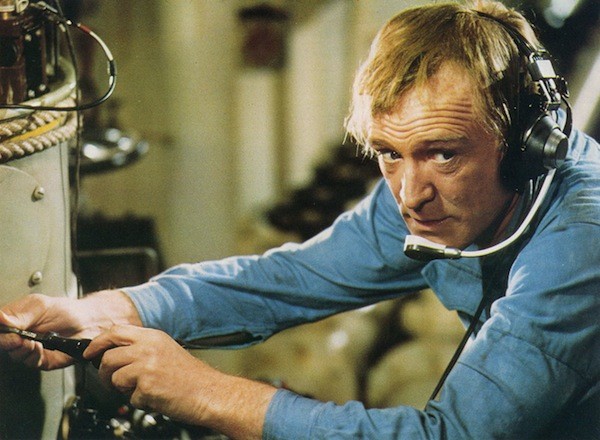 JUGGERNAUT (1974). The title doesn't provide any clues — no, this isn't a movie about the X-Men villain — but Juggernaut is a nifty British thriller that offers maximum returns on its minimalist approach. "Juggernaut" is the name used by a blackmailer who has planted several explosives on the luxury ship the Britannic; unless he's paid a formidable sum, the bombs will detonate, killing all 1,200 passengers alongside the dedicated crew led by the vessel's captain (Omar Sharif). As the police (repped by Anthony Hopkins) and the company executives (repped by Ian Holm) deal with tracking down the homegrown terrorist, a bomb specialist (Richard Harris), his right-hand man (David Hemmings) and the rest of his bomb-disposal unit descend upon the ship with the assignment to defuse all of the devices before time runs out. Countless movies have featured scenes in which the hero has to choose between cutting the red wire and the blue wire, but few have been as detailed and as exciting as this one. The script by Richard DeKoker (aka Richard Alan Simmons) allows for occasional flashes of humor (mostly through Harris' wisecracking character), while director Richard Lester (A Hard Day's Night) refuses to kowtow to any melodramatic excesses. The fine Indian actor Roshan Seth (Gandhi, Indiana Jones and the Temple of Doom) makes his film debut as a friendly ship steward, while Clifton James, the notorious Sheriff J.W. Pepper from a pair of middling James Bond adventures, appears as a Southern politician. 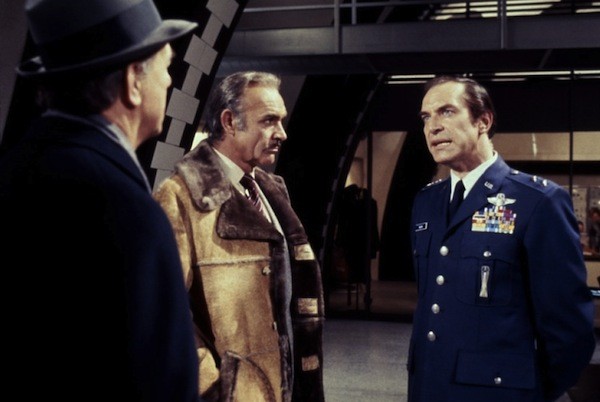 METEOR (1979). The disaster film, a profitable genre throughout much of the 1970s, eventually became the cinematic equivalent of persona non grata, and the last two years of the decade saw a rush of critical and commercial bombs on the order of The Swarm (a guilty pleasure, I gotta confess), Beyond the Poseidon Adventure, Avalanche and, arguably the worst of the bunch, The Concorde ... Airport '79. The penultimate film before the genre went completely belly-up (1980's When Time Ran Out... was the final gasp) was Meteor, an expensive flop that, if nothing else, allowed both Natalie Wood and Brian Keith the rare opportunity to display their masterful command of the Russian language. An asteroid five miles wide is headed straight for Earth, and if it hits, it's the end of the world as we know it. A NASA bigwig (Karl Malden) taps a former colleague (Sean Connery) to help find a solution, but it soon becomes clear that progress will only be made if the U.S. pools its resources with those of the U.S.S.R. Yet even as the NASA brains feverishly work alongside a Russian scientist (Keith) and his translator (Wood), smaller meteor chunks are already pelting the earth, causing mass destruction in New York (the Twin Towers are shown taking a direct hit), Hong Kong and elsewhere. Meteor isn't as cheesy as some of the other late entries in the disaster cycle, but it's also not much fun, with reams of dry dialogue, visual effects that run hot and cold, and slumming movie stars trying their damndest to stay awake (although you do get to hear an animated Connery ask government bigwigs corralling him into helping out, "Why don't you also shove a broom up my ass so I can sweep the floor on the way out?"). The cast also includes hammy Martin Landau as a Russkie-hating officer, cult favorite Sybil Danning as a skier who gets buried under a mountain of Styrofoam — excuse me, snow — and "Henry Fonda as The President." The film earned an Oscar nomination for Best Sound, presumably for the whooshing noise the space rock makes as it hurtles toward our planet. 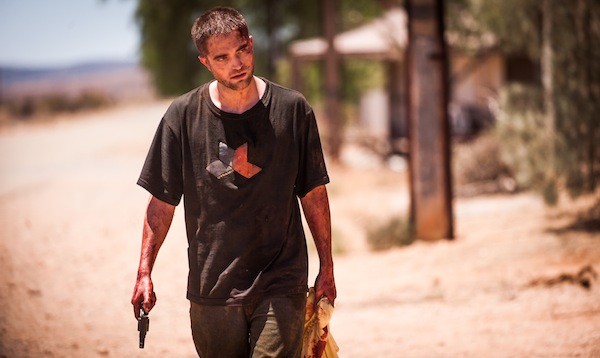 THE ROVER (2014). Look, we all know that Guy Pearce can act; we've been privy to that fact for years, thanks to his work in such pictures as Memento and L.A. Confidential. No, the wild card in The Rover is Robert Pattinson, reviled in many circles — but adored in just as many — for portraying sparkly vampire Edward Cullen in the Twilight franchise. Whether he was actually any good in that series was incidental, something never discussed by either his cheerleaders or detractors. So it's no surprise that, like Daniel Radcliffe from the far more beloved Harry Potter films, he's been largely accepting unconventional parts in smaller movies, working hard lest he forever be associated with only one project. In The Rover, Pattinson acquits himself well enough as he plays second banana to Pearce, who has the central role in what's yet another bleak, post-apocalyptic saga set in a futuristic wasteland. Pearce's man of few words is upset when three criminals (Scoot McNairy, David Field and Tawanda Manyimo) abscond with his automobile, so after he's fortunate enough to run across the fourth member (Pattinson) of that gang, a mentally slow kid who was injured and left behind, he sets out in hot pursuit, using his hostage-cum-ally to lead the way. Australian writer-director David Michôd made his directorial debut with 2010's solid Animal Kingdom, starring Pearce, Joel Edgerton and Oscar-nominated Jacki Weaver; The Rover, which he penned with Edgerton, proves to be a disappointing follow-up, retaining that previous picture's sense of danger but jettisoning everything else that was interesting and unpredictable. With its unforgiving terrain and pungent nihilism, the film also can't help but stir memories of fellow Aussie John Hillcoat's excellent 2006 endeavor The Proposition (also, incidentally, starring Pearce), yet in this new picture, the existential angst feels tapped out, with Michod unable to do anything but push his pawns through a series of incidents that shed little light on the characters or the hellish world in which they live. The performances help, but everything else about The Rover turns out to be as barren and arid as the movie's backdrop.

The only extra on the Blu-ray is a making-of featurette.