The dirty girls behind Nashville's Birdcloud 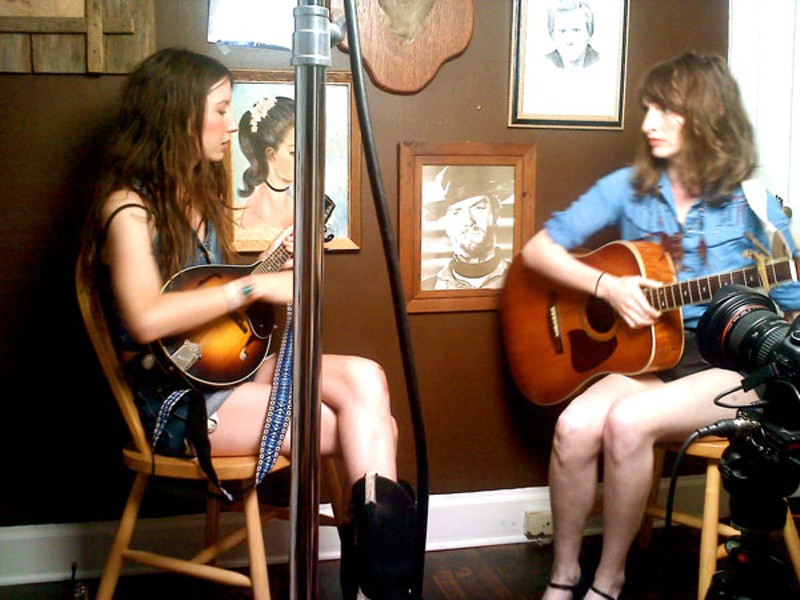 To say Birdcloud — the Nashville duo of Makenzie Green and Jasmin Kaset — plays crude songs is an understatement. "Saving Myself For Jesus," their wide-open, scathing mockery of evangelical abstinence culture, was pulled from the seeming free-for-all that is YouTube. Here's a sample of the lyrics: "You can titty-fuck me/ tie me up, dry hump me... Honey, I'll roll over let you cram it in my back door/ I ain't gonna be one of them Mary Magdalene whores/ my pussy belongs to Jesus."

Green and Kaset apparently aim to offend, but they're also quite funny — and they have a posse. With the video page of its official site crowded with tribute covers of the still-banned-on-the-'tube song in question, Birdcloud's whiskey-and-moonshine-fueled dirty little ditties have made converts aplenty. On June 28, the duo brings the live show to the Chop Shop where they'll play facing each other — hardly a Bible space between them — staring into each other's eyes with occasionally frightening intensity as they belt out lines like "them alligators in the Delta/ I'm certain that they smelled ya/ a'warshin' your big ol' pussy 'fore you go to town."

Yeah, it may be Birdcloud's raw, gross-out sexuality that got its video pulled. What they do flies in the face of traditional women's roles, sure, but also runs contrary to a patriarchal hangover supposing female humor doesn't approach the sweaty, smelly undercurrents of civilized life the way male humor does. This may be fading — please let it do so — but some even stand by the argument that women are biologically unfunny.

"There are more terrible female comedians than there are terrible male comedians," late contrarian Christopher Hitchens wrote in a generalization-heavy 2007 Vanity Fair piece entitled "Why Women Aren't Funny." This men's club attitude holds as a loosely suppressed premise that comedy is reproductive in nature, in that men rely on humor to find a mate while women simply rely on their looks; babies, too, apparently soften the hard edge required to make a good joke.

"Childbearing and rearing are the double root of all this, as Kipling guessed," he wrote, citing Rudyard Kipling's "The Female of the Species" in a downhill race to his pseudoscientific conclusion. "As every father knows, the placenta is made up of brain cells, which migrate southward during pregnancy and take the sense of humor along with them."

Yet Birdcloud's brand of funny is a raw, animal thing — nowhere near Hitchens' illusion of boringly demure womanhood. And while it may be easy to see this duo as an underground answer to the Nashville establishment's perfectly groomed, perpetually abstinent (or happily married) leading women, there's also the mainstream phenomenon of films like Bridesmaids. While this movie and new release The Heat feed off familiar industry tropes, there's something to be said for mass-audience cinema in which women are crass, irreverent and funny without having their success or value defined by male attention.

So, if you see Birdcloud on Friday night, you'll encounter dirty-as-hell Southern comedy that's as raunchy as it is smart, and you'll see one of many proofs against Hitchens' chauvinist argument. And maybe, if the previously mentioned films are any indication, you'll be seeing more of this kind of comedy in the mainstream too — though Birdcloud rushes in where summer blockbusters fear to tread.