The Crayzee Collective Cultivates a Dance Scene in Charlotte

You have to start somewhere

Just after 8 p.m. on a recent Thursday night in the NoDa @ 28th atrium on North Davidson Street, AJ Glasco and Arynn Owens are warming up for a night of rehearsals with the Crayzee Collective, a dance troupe Glasco started about three years ago.

Owens slips out of her white Fila sneakers and begins doing deep stretches before going into ballerina twirls. Glasco goes through the motions of a few half-hearted dance moves while looking into the reflection of an office window in the atrium. Two other members of the crew bring out cups of water from Amelie's and place them on a broken down piano sitting near their rehearsal space.

The group has been dancing here since before the collective began. When they first started coming together to hash out moves — before there were any performances to rehearse for — they'd sometimes take their act-in-progress into Uptown, dancing through the streets until the early morning hours. 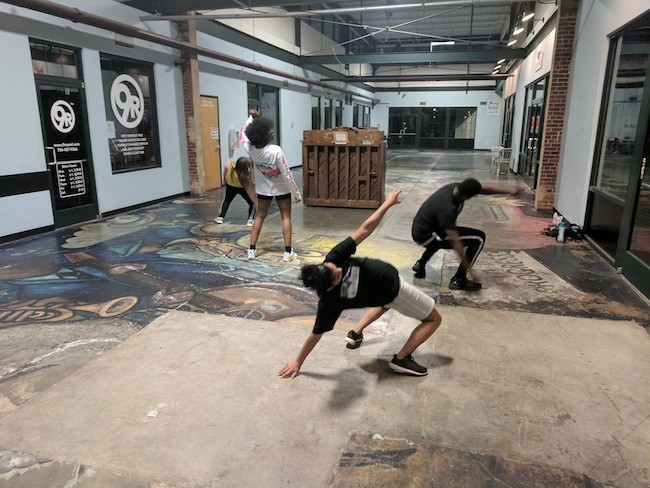 Glasco eventually decided that if the group was always going to be dancing and hanging out together, they might as well make it official. And so they formed the Crayzee Collective. A year later, they would perform at the Breakin' Convention and since then have performed elsewhere in Charlotte at events like Taste of Charlotte.

Just four members of the group are present on Thursday evening, as they walk through the steps for an upcoming performance at the Stage Door Theater. Within the next year, Glasco plans to open his own studio, but right now his eyes are on strengthening his own team and helping to develop the dance scene here in Charlotte.

Glasco and Owens hope the "choreography concert" planned for September 22, which will include performers from Raleigh, Greensboro and Columbia, South Carolina, can serve as a "test run" for more similar performances in the future.

"We're going to get this small, intimate venue and see how many people we get to show up, get the word out about us in the city, and then the next year we'll have maybe a spring, a fall and a winter show. Something like that, just try to see it out," Glasco says. "This stuff's expensive, man. You've got to support it on your own."

Glasco has been working on building a support network since he came to town about six years ago. As soon as he moved here from his hometown of Asheboro, he took a dance class on the side while attending culinary school. He had learned some dance in a studio for about a year previously, but hated it, especially the six months of ballet. But the Charlotte class was different, and it stuck.

"I found out, I'm like, 'This is what I really want to do,' because it's an adult-level class. I get to go in and be an individual but then there are still guidelines you go by, so that was something that I could get with," he recalls. "I left culinary school and started to pursue dance as a full-time career."

He eventually began to study choreography, and that's what he plans to do with his studio once he's able to open it. 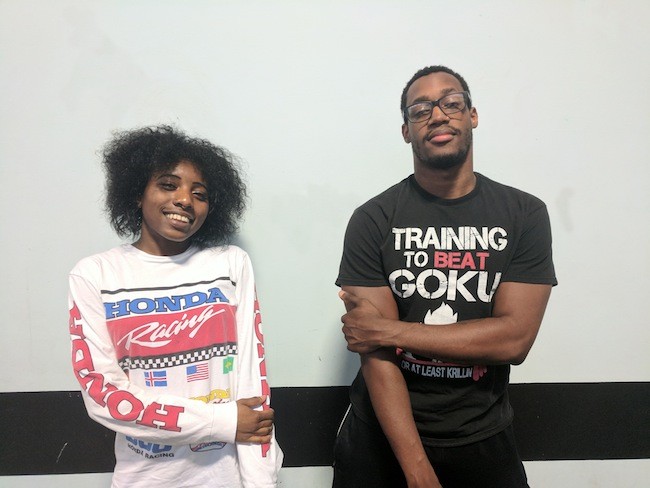 Owens came into the picture about three years ago, just as the idea for Crayzee Collective was coming together. She had quit dancing when she moved to North Carolina from upstate New York at 12 years old, too upset by the move to find happiness in her hobbies. She eventually became a talented photographer, and in 2015, Glasco asked her to shoot headshots and group photos of a new collective he was forming.

Her passion for dancing came back when she saw what Glasco was up to, and she's been dancing alongside him ever since.

Glasco and Owens, both 25 years old, have similar dancing styles, although they differ in the sense that Glasco was self-taught while Owens grew up training in a studio.

Glasco describes his own style as "urban abstract." Most of his influences come from hip-hop, with other styles and elements mixed in. He says he doesn't like to dance in front of mirrors, but prefers a more visceral approach.

"I don't have the technical training to know if I'm doing it right or not, so if it just looks good, we go with it," he says. "I'm so used to not using a mirror that being in front of a mirror is still weirdish to me. I just kind of feel it out and get it inside my body. I've developed it; it's like a certain feeling, and it just hits me a certain way and I'm like, 'Oh, I've got to do that again.'"

Owens says she's borrowed elements of ballet, tap dance, Afro and hip-hop dance styles in an attempt to make something all her own.

"You have to incorporate all those, but I don't really like all the rules of that, and I just want to break the mold so I take things that I like from those styles and mix them with my own groove," she says.

That individuality is a mindset that Glasco nurtures within the Crayzee Collective.

Michelle Kerestes, a 28-year-old member of the troupe with a background in tap dancing, hadn't danced for 13 years before meeting Glasco and joining in with the crew on their late-night dancing expeditions through Uptown Charlotte. 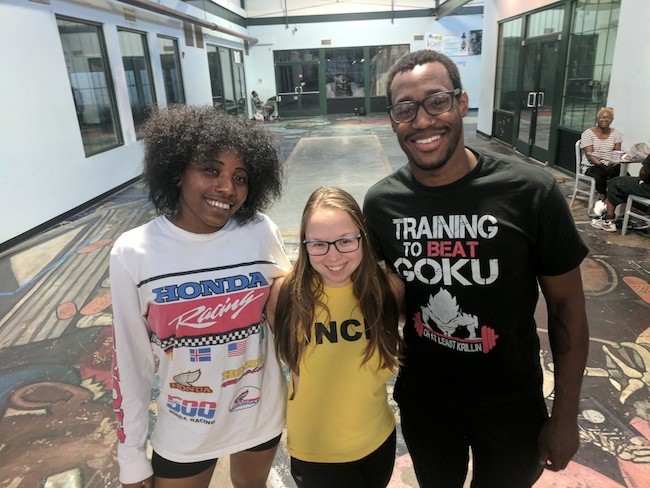 She says Glasco's readiness to let her grow on her own terms is what got her back into dancing and kept her with the group.

"They allow us to actually have creative freedom to really express yourself," Kerestes says. "I mainly did it as a way to get away from stress and anxiety but then I found a family that didn't judge. They let you be who you want to be and also within that grow as a person and a dancer."

Unsurprisingly, that's been a recipe for growth within the group. It was just a year after forming that Glasco was invited to choreograph a Crayzee Collective performance at the 2016 Breakin' Convention, an international touring hip-hop dance festival that began in London. The group did so well that they were invited back for the 2017 convention, for which Glasco and Owens co-choreographed a routine involving Satan (Glasco) leaving heaven and taking some angels with him, only to lose them again to God (Owens).

Glasco was even invited to the Breakin' Convention in London in April 2017. The experiences were all great for the Crayzee Collective, but they're bittersweet memories now considering that the convention won't return to the Queen City in 2018.

"It's actually really sad that they're not coming here," Owens says. "It was a great platform for what we do, mixing hip-hop and theater. It helped people realize that this is not just like live street entertainment, or that we're not just having fun with it. It's something serious that you can actually pursue."

Without the convention, the burden for spreading the word and strengthening the dance scene in Charlotte lies on performers like Glasco and Owens, and they're happy to take up that torch. The two would like to grab the attention of the culture in Charlotte, the way dancers get attention in other cities they've visited.

Owens has noticed that, while visual artists and musicians have seen a growing momentum in Charlotte in recent years, the same can't be said for dance.

"There's never really any dance performances. There's only performances at dance festivals or Taste of Charlotte; just those family things," she says. "I feel like if we had more of a community like Atlanta does or L.A. does when it comes to dance — where people just genuinely want to watch it, and go see it — that's when I think the dance world here will evolve and start to grow bigger and have more support. Right now it's just, like, waiting."

Glasco agrees, and jumps in to continue Owens sentence, something that happens between the pair a lot.

"It's really cool how even being in London, they have so much more of a respect for arts as a whole, and dance is kind of at the forefront almost. It's the complete opposite [of Charlotte]," he says. "It's like, dance, theater, all that stuff is at the forefront, and then it's like, 'OK, singing's nice.' It's so widespread that everybody gets a piece of the pie. You can go to a show and get everything. It's almost like a buffet for art lovers. So that's really cool, and it's something that I wish Charlotte would pick up."

On the bright side, neither Glasco or Owens is ready to leave Charlotte for a more active dance scene. When I ask if either of them ever gets discouraged and considers moving to a town with an already burgeoning scene, they both vehemently deny it, and they do so immediately.

"We'd love to see it come up here," Owens says. "I don't want people to have to leave their home studios. We can do it here. That's why I feel like those other places are oversaturated now, because they're pulling in so many people who leave their own towns. If we can just get everything from where we are, that would be great. And I think we can."

Who better to say so than the one who convinced Satan's stolen angels to come back to heaven?