The comedy scene in Queen City is no joke

February 15, 2019
comment
Charlotte has been attracting national headlining comedy acts for decades, but that doesn’t mean the stage is strictly for pros. Whether your shtick is stand-up, sketches, or improv, your fellow performers (and audiences) are waiting to welcome you.
Comedy is booming in the post-Internet years – in the era of the Netflix special, podcasts, and social media, and memes, quality laughs are just a few clicks away. The local live scene precedes all that and flourishes in this generation.
The Comedy Zone is one of the comic community’s longtime anchors. It is both a venue and the biggest comedy booking agency in the country, and it’s been headquartered here in Charlotte for over 30 years. It’s part of the reason that then-newlyweds Johnny and Debbie Millwater decided to move here after completing a cross-country comedy tour in 2005. 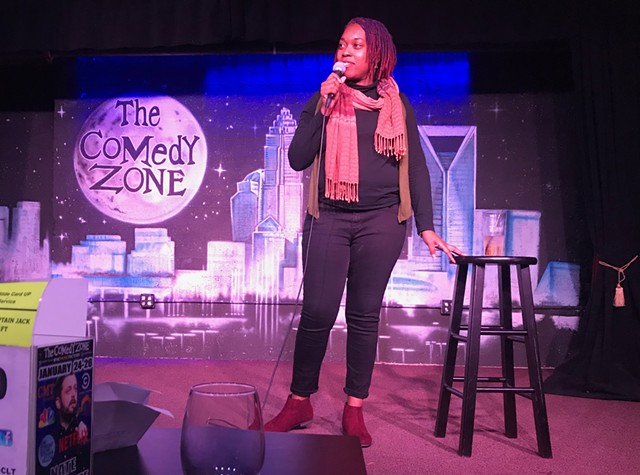 At that time, Debbie Millwater explained, “your choices to enjoy comedy were simple: The Comedy Zone operated off of College Street, bringing you the best, most hilarious acts the country had to offer; a single stand-up open mic at a coffee shop by CPCC on Elizabeth Street called SK Net Cafe which later became Crown Station; Robot Johnson sketch comedy operated out of The Perch led by Sean Keenan of MTV’s Talking Baby fame; and a single improv troupe, Charlotte Comedy Theater, headed by Chicago-trained Keli Semelsberger.”
Options have proliferated since then, thanks in no small part to Millwater herself. “The short story is that I plan roughly 100 comedy shows a year for the up-and-coming comedians at The Comedy Zone Charlotte under the banner ‘CrowdPlay.Events.’ I love it. This is my passion. And I am what I am because The Comedy Zone is my biggest fan and supporter,” she said.
What’s more, all three institutions she named are still going strong. The Comedy Zone is now located in the Avid XChange Music Factory, hosting celebrity acts, stand-up classes, open mics, and more. The open mic at Crown Station is said to be one of the most welcoming and well-attended rooms. Robot Johnson’s next show is in March (see www.robotjohnson.com for updates). Keli Semelsberger, who trained with Amy Poehler, performs, teaches classes, and coaches several improv performance troupes through The Charlotte Comedy Theater, based in the VIP room at Wet Willie’s.
With this backbone, it’s easy to see why the scene here is thriving. There are more A-list shows than ever, over a dozen recurring open mics, weekly showcases around the city, and several improv groups. There’s also an annual comedy festival: the third Queen City Comedy Experience will be held at Blumenthal Performing Arts, Sept. 27-29.
There are so many shows, in fact, that many people I chatted up for this article were tongue-tied when I asked them to name their must-sees. As The Comedy Zone’s Joel Pace puts it, there are “too many to name and if I leave someone off the list they will kill me.”
Your best bet to keep up with the busy calendar is to visit “Charlotte Laughs Tonight” on Facebook (www.facebook.com/charlottelaughstonight). The group maintains a comprehensive event listing of all things comedy, from big acts to open mics and writing workshops. Pace encourages you to remember that “comedy is very subjective. Just because you like a certain type/style of comedians doesn’t mean the others will not entertain you. Give them all a try.”
He should know. Not only does Pace book for The Comedy Zone, he also teaches its stand-up class, along with comedians Tim Wright and Derek Blackmon. Many alumni of this class have become professional comics (Julie Scoggins, Paul Hooper, J Bliss, Joe Zimmerman, and Mike Speenberg, to name a few) while others are in it to cross something off their bucket lists.
This class is offered five times a year, but since it’s capped at only 15 students at a time, the sessions are typically booked six months in advance. Can’t wait that long? No worries. If getting involved in comedy is on your bucket list, there are abundant resources to keep you in the know and laughing.

STAND-UP
For the latest information about The Comedy Zone’s classes, visit www.cltcomedyzone/classes

IMPROV
To take one of Keli Semelsberger’s classes, check out the latest information at www.charlottecomedytheater.com. Improv classes for adults and kids are also offered at Acting Out Studio (www.actingoutstudio.com), a Queen City Comedy affiliate in South Charlotte; the brand new Comedy Arts Theater of Charlotte (CATCh), www.catch.theater; and by OTC Improv (www.otcimprov.com) which holds classes in Fort Mill.

CONNECT WITH COMICS
The closed Facebook group Charlotte Comedy Scene is an active community for both fledgling and established comedians and creatives. Get the inside word on shows and stage time and connect with other comics about the craft. Search for the group through Facebook to request access.

The Comedy Zone also has a podcast that shares recorded shows from national headliners and featured comics every week. Check out The Comedy Zone Podcast – part of the nascent Queen City Podcast Network – wherever you listen to your podcasts.