The Bravados, The Cyclops, The Naked Prey among new home entertainment titles | View from the Couch | Creative Loafing Charlotte

The Bravados, The Cyclops, The Naked Prey among new home entertainment titles

THE BRAVADOS (1958). The 1950s witnessed the release of a staggering number of psychological Westerns — impressive oaters that were a far cry from the more traditional genre pictures that had previously enjoyed favor. Star James Stewart and director Anthony Mann cornered the market on these sorts of efforts, yet perhaps the earliest example was the excellent 1950 gem The Gunfighter, directed by Henry King and starring Gregory Peck. Peck and King also teamed up for The Bravados (actually their fifth of sixth collaborations), another hard-hitting Western saga which sports a chilling twist at the end. Peck essays the role of Jim Douglas, a cowboy who rides 100 miles to witness the executions of the four men (Stephen Boyd, Albert Salmi, Henry Silva, and Lee Van Cleef) he’s been tracking for six months, a mission he began immediately after the rape and murder of his wife. Hours before they're to be hanged, the outlaws escape, forcing Taylor to hunt them down and attempt to kill them himself. Joan Collins is merely adequate as Jim’s former flame, but Peck lends steely conviction to his role of a gunman whose lust for vengeance begins to cloud his judgment. If the hangman Mr. Simms looks familiar, that’s because he’s played by Joe DeRita right before he began his stint as Curly Joe, the final “third Stooge” to mainstays Moe Howard and Larry Fine, in a series of films starring The Three Stooges.

Blu-ray extras consist of a trio of Fox Movietone newsreels involving the film’s premieres in New York and Los Angeles; the theatrical trailer; and an isolated track of Lionel Newman’s score. 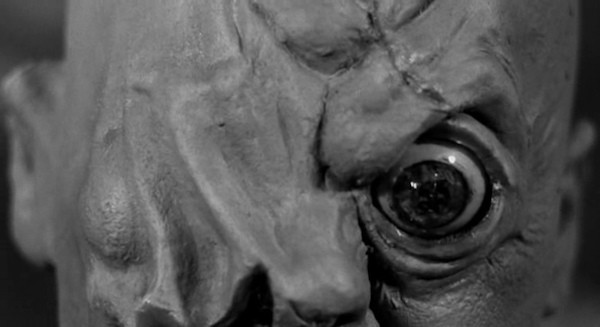 THE CYCLOPS (1957). Writer-director-producer Bert I. Gordon (aka Mister B.I.G.) reportedly had more movies featured on Mystery Science Theater 3000 than any other filmmaker, yet somehow The Cyclops escaped being mercilessly mocked by the Satellite of Love crew. Perhaps that was for the best: Even by the standards of the notorious B.I.G. — and even given my own proclivity for ‘50s fantasy flicks — this one is rough going. Featuring characters even more threadbare than those often encountered in “B” films, The Cyclops is more dull than anything, and even the late-inning appearance by the title monster proves to be too little, too late. With her fiancé having disappeared a few years earlier in unexplored Mexican terrain, Susan Winter (Gloria Talbott) sets out in a small plane to search for him, accompanied by her beau’s best friend (James Craig), a wishy-washy pilot (Tom Drake), and a financier (Lon Chaney Jr.) who’s only interested in the area’s rich uranium deposits. Arriving in the land unknown, the group encounters giant lizards, giant spiders, and a giant man (Duncan Parkin) with only one visible eye and a nasty disposition. The visual effects are about as cut-rate as one would expect, but the makeup effects are another matter. YMMV, but I actually dug the look of the cyclops, with makeup artist Jack H. Young deserving the credit for this creation (Young would later share an Emmy Award nomination for the makeup designs showcased on the 1979 TV adaptation of Stephen King’s Salem’s Lot). 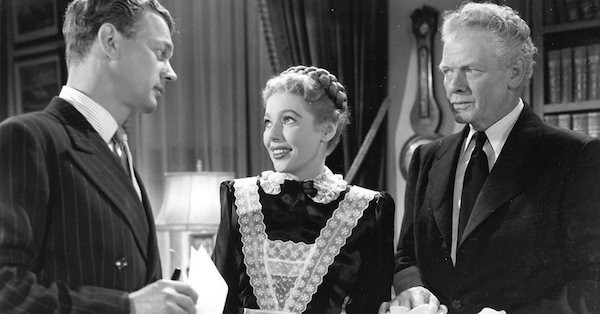 THE FARMER’S DAUGHTER (1947). In the same political-populist vein as the Frank Capra masterpiece Mr. Smith Goes to Washington comes a movie that could just as easily have been called Miss Holstrom Goes to Washington. Loretta Young stars as Katrin “Katie” Holstrom, a Swedish-American farmgirl who heads to the big city with the intention of becoming a nurse. An encounter with a sleazy painter (Rhys Williams) leaves her broke, forcing her to find employment at the home of prominent politician Glenn Morley (reliable Joseph Cotten) and his mother, a respected kingmaker (Ethel Barrymore). Learning the ropes under the family butler (Charles Bickford), Katie excels in her duties as the household’s new maid, although she’s just as comfortable discussing politics as she is washing bedsheets and ironing shirts. Thus, when Glenn’s party decides to back an unscrupulous alderman (Art Baker) for Congress, an angry Katie decides to accept the opposing party’s offer to run against him. The frantic antics in the third act aren’t nearly as engaging as the more pointed comedy from the first hour. Young won the Best Actress Oscar for her charming if hardly award-worthy turn (her win is still considered one of the biggest upsets in Oscar history), with Bickford copping a nomination for Best Supporting Actor. Gunsmoke star James Arness (here billed as James Aurness) makes his film debut as one of Katie’s rambunctious brothers. 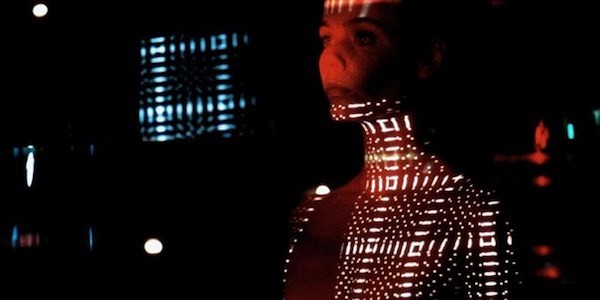 LOOKER (1981). Michael Crichton’s name has long been associated with such hits as Westworld and Jurassic Park that it’s often easy to overlook the clunkers that have dotted the cinematic section of his resume. Slightly easier to take than such duds as Runaway and Congo is Looker, which found the author tackling both directing and scripting duties. Albert Finney is a welcome presence as Dr. Roberts, whose status as Beverly Hills’ best plastic surgeon means he becomes the leading suspect when a number of his patients turn up dead. Opting to conduct his own investigation, the good doctor discovers that the trail leads to John Reston (James Coburn), a successful businessman whose holdings include a suspicious hi-tech research facility known as Digital Matrix. With its focus on computer-generated imagery as well as its examination of how Americans can easily be duped by the subtle messages forced upon them by capitalist corporations and venal right-wing politicians, Looker was eerily prescient in 1981 and remains topical today. But its story is an absolute mess, and Crichton’s hyperactive staging means that many scenes (including one that seems to have inspired the 2015 POV action flick Hardcore Henry) whiplash repeatedly between innovative and inane.

Blu-ray extras consist of audio commentary by Crichton; an introduction by Crichton; a deleted scene that obviously should have remained in the film (since it provides the motive — a weak one, admittedly — for the murders); and the theatrical trailer. 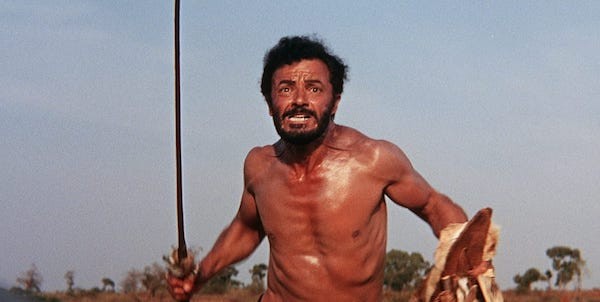 THE NAKED PREY (1966). After his acting career began to wane, Hollywood hunk Cornel Wilde formed his own production company in order to allow him to assume the additional mantles of director and producer. His best-remembered title in this capacity is The Naked Prey, a fast and furious adventure yarn that moves at the speed of a cheetah zeroing in on a gazelle. A period yarn set in deep Africa, the picture stars Wilde as a respected and respectful safari guide whose colonialist employer (Gert Van Den Bergh) insults the members of a large tribe. In retaliation, the natives capture the hunting party, torturing and killing all its members save for Wilde's character (who's given no name and is only listed as "Man" in the credits). He's given a head start to run for his life, a mere diversion for the tribe's best warriors until they realize that their prey's levels of resourcefulness and determination match their own. An Oscar nominee for Best Original Screenplay (Clint Johnston and Don Peters), The Naked Prey is a marvel of economical filmmaking, as lean and mean as the characters populating it. Brutal in its depictions of both tribal savagery and English arrogance, the film nevertheless avoids lazy stereotyping, often presenting its African characters in sympathetic ways while never letting us forget that primitive behavior (even from Man) is a prerequisite to surviving in such a harsh landscape.

Blu-ray extras include audio commentary (from 2007) by film scholar Stephen Prince; Paul Giamatti's reading of the story "John Colter's Escape," about the real-life incident upon which The Naked Prey was loosely based; and the theatrical trailer. 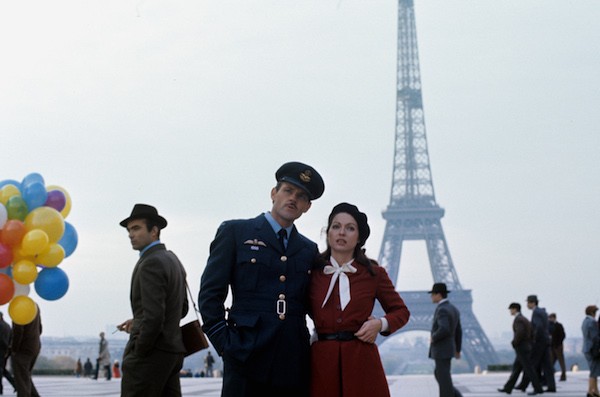 THE OTHER SIDE OF MIDNIGHT (1977). Most film fans know the story of how 20th Century Fox had more faith in Damnation Alley than in the studio’s other 1977 sci-fi outing, but many may not have heard about how the studio also had more faith that year in another property than it did with Star Wars. Sidney Sheldon’s novel The Other Side of Midnight was an enormous hit; convinced that the film version would be equally successful, the studio blackmailed theater exhibitors by only giving them The Other Side of Midnight if they would also agree to play the unfamiliar Star Wars. Of course, Star Wars emerged a record-smashing success, but, contrary to popular belief, the Sheldon picture was not a flop and turned a small profit at the box office. Critically, though, the picture was ravaged, earning poor notices for its soggy story about a naïve French girl (Marie-France Pisier, passable) who over the years hardens into a remorseless actress bent on exacting revenge on the American pilot (John Beck, putrid) who deserted her and later married a sweet-natured Yankee (Susan Sarandon, peppy). The Other Side of Midnight is marked by rich production values (the costume design snagged an Oscar nomination) and a nifty twist ending but hampered by colorless characterizations and extreme overlength (165 minutes).

FERAL (2018). Alas, an outdated code of integrity (a curse in the Trump Era, I realize) and an obvious conflict of interest prevent me from reviewing the horror flick Feral since it was made by two good friends of mine — Mark H. Young (writer-director) and Adam Frazier (co-writer) — but there's no reason I can't plug the heck out of it! The film was released on Blu-ray and DVD on October 2 from Shout! Factory. You can order the movie here. Be sure to purchase extra copies for your grandparents and nieces 'n' nephews — with that cover artwork, they’ll make great stocking stuffers at Christmas!