The Babadook, Class of 1984, Tales of Terror among new home entertainment titles | View from the Couch | Creative Loafing Charlotte

The Babadook, Class of 1984, Tales of Terror among new home entertainment titles

THE BABADOOK (2014). How's this for an endorsement? William Friedkin, who directed the movie that tops poll after poll as being the scariest ever made — 1973's The Exorcist, natch — is quoted as stating that "I've never seen a more terrifying film than The Babadook. It will scare the hell out of you as it did me." That's a hell of a plug, and while most will agree that there are many flicks out there actually more terrifying, this one nevertheless registers as one of the best horror films of modern times, resting just a notch below such keepers as The Descent and The Orphanage. Making a significant feature-film debut as both director and writer, Jennifer Kent has fashioned a psychological drama that's ultimately more about real-world terrors like grief, frustration and loneliness than about the types of monsters that reside in the closet or under the bed. Essie Davis is excellent as Amelia, still mourning the gruesome death of her husband (killed in a car crash while rushing her to the hospital to give birth) even as she has to contend with their 6-year-old son Samuel (Noah Wiseman), who appears to be a seriously disturbed boy. Into their home appears a mysterious children's book called Mister Babadook, and by reading it aloud to Samuel, Amelia seems to have unleashed a very real — and frightening — presence in her house. The first half of the picture is flat-out terrific, and if the second half disappoints on a narrative level due to a shift into more commonplace developments, the ambiguous subtext still hums along at top speed, resulting in plenty of post-viewing discussion fodder.

Blu-ray extras include behind-the-scenes featurettes; deleted scenes; cast and crew interviews; a piece on illustrator Alex Juhasz and the storybook he created for the movie; Kent's 2005 short film Monster (the basis for this feature); and theatrical trailers. 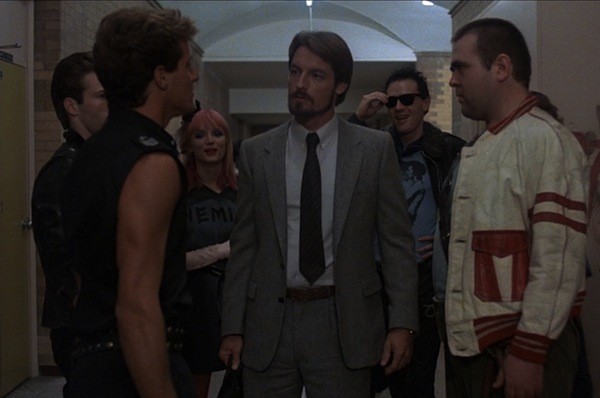 CLASS OF 1984 (1982). This effective exploitation flick opens with the words, "Last year, there were 280,000 incidents of violence by students against teachers and their classmates in American high schools. Unfortunately, this film is based on true events. Fortunately, very few schools are like Lincoln High ... yet." In other words, what seem slightly farfetched in 1982 has proven to be the norm in 2015, a sad commentary on this nation's increasingly wretched educational system (and growing even worse with the insane right-wing agenda of legally allowing more guns in schools). Basically an unofficial remake of 1955's potent Blackboard Jungle, this stars Perry King as Andrew Norris, a music teacher who arrives at an inner-city school ready to teach and inspire. Instead, he learns that the school is nothing less than a war zone, and that the leader of the worst gang is a smart but vicious punk named Peter Stegman (Timothy Van Patten). Norris soon discovers that going the saintly Sidney Poitier/To Sir, With Love route isn't an option, and that he'll need to use his fists rather than his compassion to deal with Stegman and his psychotic sycophants. Director-coscripter Mark Lester films this for maximum cathartic impact, tapping into viewers' thirst for justice and revenge against these disreputable brats as thoroughly as the filmmakers behind such eye-for-an-eye yarns as Death Wish and The Crow or, more recently, The Equalizer and any given Liam Neeson programmer. Roddy McDowall steals the film as Terry Corrigan, a chipper yet cautious biology teacher who eventually snaps, and that's a chubby, pre-Family Ties Michael J. Fox (billed here as simply Michael Fox) as Arthur, one of Norris' good (read: law-abiding) students. Lester followed this with the limp 1990 sequel-of-sorts Class of 1999, in which violent students square off against robot teachers!

Blu-ray extras include audio commentary by Lester; a piece in which King discusses his entire career; interviews with two of the actresses playing students, Lisa Langlois (the wicked Patsy) and Erin Noble (the wholesome Deneen); and the theatrical trailer. 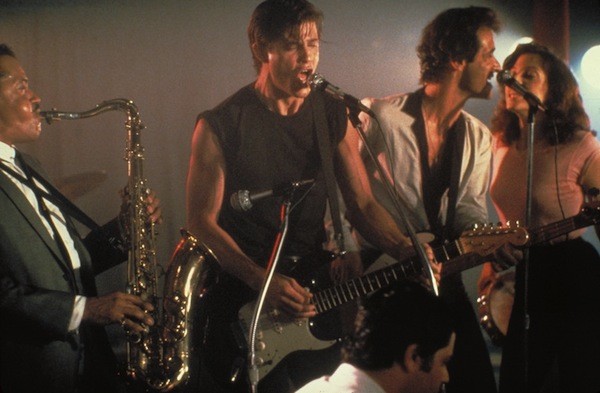 EDDIE AND THE CRUISERS (1983) / EDDIE AND THE CRUISERS II: EDDIE LIVES! (1989). Years after the fact, the Creative Loafing story The 20 Greatest Rock Films Ever Made (as determined by a 10-person panel of film and music critics) still receives a substantial number of hits online. No, you won't find Eddie and the Cruisers on that list, but you will find it in the sidebar The 10 Worst Rock Films Ever Made. It landed in the #8 slot, and as I wrote on behalf of the panel, "And just when you thought it couldn't get any worse than this grueling rock drama, along came the 1989 sequel, Eddie and the Cruisers II: Eddie Lives!"

To be fair, the first Eddie and the Cruisers has gained quite a cult following since 1983, one that actually began a year after it flopped in theaters. Gaining newfound exposure when it aired on HBO in 1984, the film soon found itself with a hit soundtrack by John Cafferty & The Beaver Brown Band, whose single "On the Dark Side" (played ad nauseam throughout both films) reached #7 on the Billboard chart. That Cafferty's tunes sound more like the '80s-era Springsteen wannabe songs that they were rather than the '60s-era hits they were supposed to be marks just one of the many daft elements found in this sloppily constructed picture about Eddie Wilson (Michael Paré), whose Jersey band was heading toward the big time until he drove his car off a pier, supposedly perishing in the accident/suicide (his body was never found). Twenty years later, a plucky magazine reporter (Ellen Barkin) sets out to discover the true story of Eddie Wilson, interviewing his former band members (including one played by top-billed Tom Berenger) and, like everyone else, trying to figure out what happened to the master tapes for Eddie's unreleased second album, which disappeared a day after Eddie's supposed death. The film's mystery angle regarding the missing tapes is ludicrous, thus making it right at home alongside every other half-witted development in this cheesy undertaking. 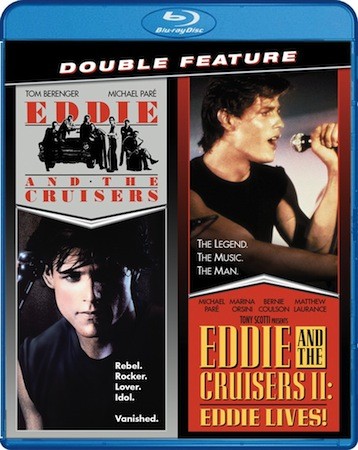 With a $4.7 million haul, Eddie and the Cruisers was a box office underachiever, yet it seems as successful as The Avengers when compared to Eddie and the Cruisers II: Eddie Lives! One of those sequels that absolutely no one wanted (see also The Sting II and Return to the Blue Lagoon, among others), this grossed a desultory $536,000, resulting in an almost immediate yank from theaters. For those who can't figure it out from the title (in which case, SPOILER!), Eddie didn't actually die but instead faked his own death, so he could spend 20 years working incognito on a construction crew in Canada. But renewed interest in the original '60s band — cue the cameo by MTV VJ Martha Quinn as well as one by the deathless Larry King — means that the spotlight Eddie has long avoided might be starting to shine his way. As the moody and mysterious (and, let's face it, obnoxious) Eddie, the one-note Paré ably demonstrates why his flame burned out rather quickly during the '80s, and the movie itself suggests that, while rock 'n' roll will never die, it can periodically get buried under a mountain of ineptitude.

ODD MAN OUT (1947). Director Carol Reed had already helmed over a dozen pictures (including 1940's engaging Night Train to Munich), but it was the rat-tat-tat releases of 1947's Odd Man Out (good), 1948's The Fallen Idol (better) and 1949's The Third Man (best) that marked him as a world-class filmmaker. (So of course he eventually wins his Oscar for the bloated, impersonal likes of Oliver! But I digress.) The plot of Odd Man Out involves the IRA, but to avoid any undesired controversy, the movie tactfully opens with a disclaimer stating that "This story ... is not concerned with the struggle between the law and an illegal organisation, but only with the conflict in the hearts of the people when they become unexpectedly involved." Chief among those people is Johnny McQueen (James Mason), an organization leader pulling off a heist with three comparatively dim-witted underlings. Critically wounded during the robbery and left behind by his panicky colleagues, he must make his way through the Belfast streets, pursued by the police and at the mercy of those who seek to help, hurt or hinder him. Mason delivers a sterling performance as the suffering fugitive, trying to reach safety even as he suspects his time is almost at an end — it's an especially interesting turn because his character is too often in pain to even grasp the actions of those around him, among them a pair of helpful nurses, a neutral bartender and groups of children play-acting as Johnny and the cops (their admiration recalls that of the Dead End Kids for James Cagney's Rocky Sullivan in 1938's Angels with Dirty Faces). Robert Newton, receiving star billing alongside Mason even though he only appears during the second half, too often over the course of his career preferred to overact rather than simply act, and his ripe turn as an eccentric artist who wants to paint the dying Johnny is the only jarring performance in the picture. This earned a solitary Oscar nomination for Best Film Editing.

Blu-ray extras include an interview with British film scholar and author John Hill (Cinema and Northern Ireland: Film, Culture and Politics); an interview with music scholar Jeff Smith, who discusses William Alwyn's score; the hour-long 1972 documentary Home, James, about Mason's return to his hometown; and a 1952 radio adaptation of the film, also starring Mason.

TALES OF TERROR (1962). Between them, Shout! Factory's The Vincent Price Collection (2013) and The Vincent Price Collection II (2014) contained six of the seven Edgar Allan Poe adaptations directed by Roger Corman and starring Price. The only no-show was Tales of Terror, and Kino Lorber has filled in the gap by providing the picture with its own Blu-ray release. With Richard Matheson serving as scripter (as he did on most of the Poe-Price-Corman pics), this finds Price starring in all three segments of an entertaining anthology piece. "Morella" centers on a nobleman (Price) who's haunted by the memory of his late wife Morella (Leona Gage); these recollections are amplified by the sudden appearance of his estranged daughter (Maggie Pierce), whose birth two decades earlier led to Morella's untimely demise. The second sequence, "The Black Cat," also incorporates elements from Poe's "The Cask of Amontillado," as a drunken lout with the great name of Montresor Herringbone (Peter Lorre) becomes friends with the famous wine taster Fortunato Luchresi (Price), only to learn that Fortunato is having an affair with his wife (Joyce Jameson). And "The Case of M. Valdemar" concerns itself with a dying man (Price) who agrees to let an opportunistic hypnotist (Basil Rathbone) put him under a spell at the moment of death, a pact that meets with resistance from the ailing man's wife (Debra Paget) and doctor (David Frankham). "Morella" is easily the weakest of the three entries: Between its musty castle setting, Price in tormented mode and even a fiery climax, it's basically an abbreviation of the sort of tale seen to better advantage in full-length Poe features like The Fall of the House of Usher and The Tomb of Ligeia. "The Black Cat" is far superior, a humorous tale that benefits from some unique technical tricks, a nifty twist ending and especially a wonderful performance by Lorre. It's the best story in the trilogy, although "The Case of M. Valdemar" contains its own share of strong elements, particularly an imaginative (if farfetched) premise and effective turns by a sympathetic Price and an oily Rathbone.