The Amazing Story of the Fabulous Moolah 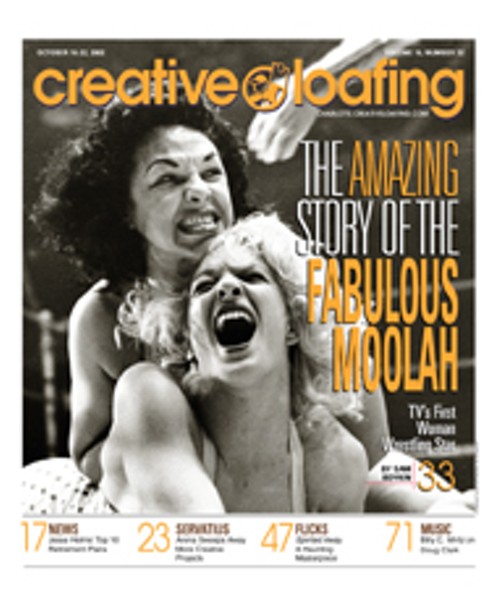 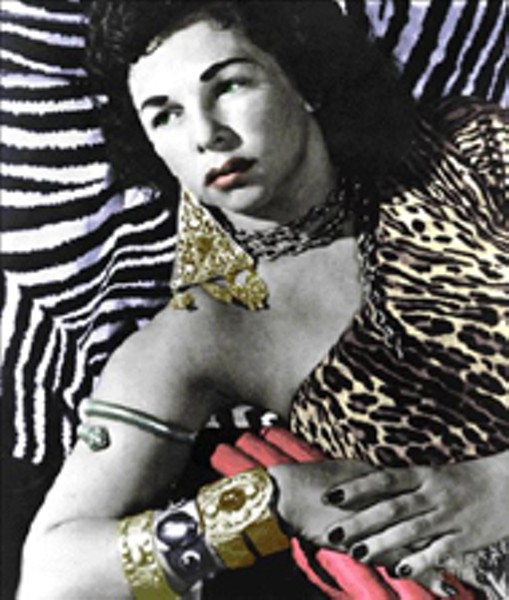 courtesy of Pro Wrestling Illustrated Moolah in her "slave-girl" days 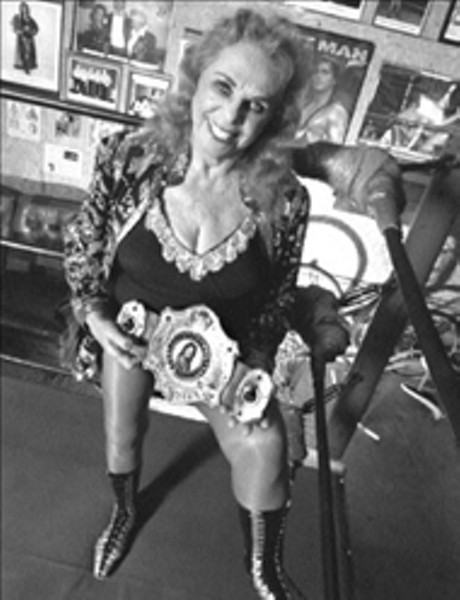 Radok Present day Moolah shows off her championship belt and her choppers
I drive through a big open gate and pull in next to a monstrous blue Cadillac. Beyond the main residence is a pond with small rental properties dotting the shoreline, along with milling clusters of geese and ducks. A tire swing drifts back and forth in the warm breeze. The expansive, 40-acre estate in a Columbia, SC, suburb off I-77 has a pleasant, even serene feel to it.

I'm greeted at the door by a vision in white slacks and a leopard skin silk top. Her hair is dyed reddish blond and styled just so; her make-up is of the old-fashioned, Southern Belle variety -- lots of base, eye shadow and lipstick.

"Hi, sweetie," she says, and clasps my outstretched hand warmly but firmly in both of hers. Her hands are adorned by several big, flashy rings, one of which is a diamond-studded dollar sign; it matches the emblem hanging from her gold necklace -- she'd look right at home working the slot machines in Vegas. She exudes a youthful energy and, considering that her career started during Harry S. Truman's presidency, she looks amazingly fit and healthy. She is none other than the one, the only, The Fabulous Moolah, the most famous professional female wrestler of all time.

The Fabulous Moolah was a pioneer in a rough and oftentimes sleazy business long before it became the slick, big-bucks "sports entertainment" spectacle it is today. During her career as a "lady wrestler," she brought real talent and dedication, and more respect, to what had been an oddball sidelight of the wrestling scene. In the process, she met and befriended a bevy of larger-than-life characters and celebrities, including Elvis Presley, Jerry Lee Lewis, and, according to her, ex-fiance Hank Williams, Sr. Today, at 79, she's still kicking ass and taking names, and continues to run a women's wrestling school from her home, located, appropriately enough, on Moolah Drive, in Columbia, SC.

"Where would you like to sit, honey?" she asks, as I'm invited inside. For that afternoon my given name no longer exists. I'm either "darlin'," "sweetie," or "honey." And actually, I like it. The house has curiously low ceilings, and was at one time probably relatively modest, but since Moolah bought the property in 1975, it's gone through a series of renovations, giving it a sprawling, rambling feel. Moolah escorts me through a cozy living room, its walls covered with mostly black and white photographs: There's Moolah dressed in revealing leopard skin; Moolah flying through the air above the wrestling ring; Moolah applying the sleeper hold; Moolah proudly displaying the WWF Women's Championship belt. The photographs document a career that has lasted over six decades.

We make our way through the living room and into the kitchen, and I notice a woman about four feet tall milling about in the back of the house. That, it turns out, is Katie Glass, a.k.a. Diamond Lil (a.k.a. "my damned midget," as she was introduced on The Daily Show with John Stewart). Glass is one of The Fabulous Moolah's many wrestling proteges.

Once in the kitchen, I'm introduced to an elderly woman preparing lunch at the oven. It's Mae Young, another female wrestling pioneer, who helped train Moolah in the early days of her career. She greets me just as warmly as Moolah. If they had offered me milk and cookies I wouldn't have been the least bit surprised. Mae Young, Diamond Lil and The Fabulous Moolah have lived here together for over a decade, and yes, it's as strange -- but also welcoming and friendly -- as it sounds.

From Slave Girl To Fabulous

The Fabulous Moolah's real name is Lillian Ellison, and she's a curious mix of grandmotherly sweetness and showbiz razzmatazz, a Hollywood throwback to tough old broads with a heart of gold. A cliche perhaps, but in her case, completely fitting.

We take a seat at the small kitchen table, and I ask her if she prefers to be called by her birth name, or her wrestling moniker.

"I don't care if you call me Moolah, Fabulous, Lillian, or Ms. Ellison, but if you write me a check, just make sure it doesn't bounce," she says, laughing heartily.

Moolah, um, Ellison grew up in Tookiedoo, South Carolina, the youngest of 13 children, and the only girl. She was 8 when her mom died of cancer. By the age of 10, she was working at her cousin's farm picking cotton.

"I got paid a penny a pound," Ellison says. "I would go out early in the morning because the dew would be on the cotton, and it would be heavier. I'd pick 100 pounds a day and get my $1. I was buying my own school clothes by the time I was 12. I was always very independent."