The 10 Scariest People In Charlotte 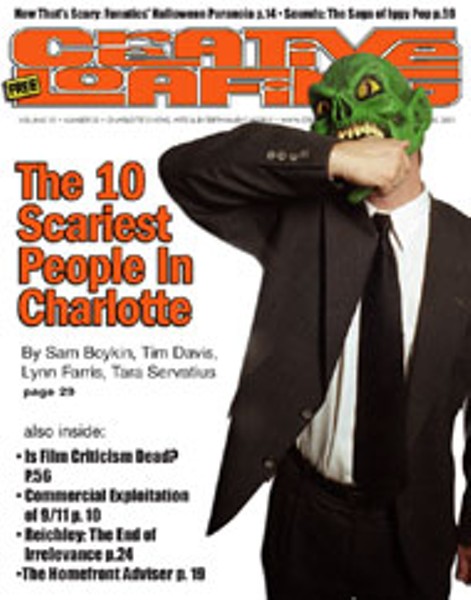 Radok #1. Charlotte Drivers
Not everything scary goes bump in the night. Some of them go "I second that motion" or "You don't belong in Charlotte" or even "If she wasn't bitin', she wasn't fightin'." Like any city, the Queen City has its share of scary monsters -- our murder rate, for example, speaks for itself. Sometimes, though, the scariest folks in town aren't always the ones who come knocking at midnight, although they're bad enough. They may include entertainers. Or lawyers. Or tight-butt busybodies. Or lead-footed jerks. Or, they just may be the people running the place. What follows is a quick look at four writers' choices of 10 fellow Charlotteans who give them the willies. Unfortunately, there's plenty more where this came from. Happy Halloween!

10. Bill Diehl
Would you give this man any candy if he showed up on your doorstep? Looking more like a roadie for Molly Hatchet than a trial lawyer, Bill Diehl is equally known for his stringy, long blond hair and his flamboyant, go-for-the-jugular courtroom style. The 57-year-old Norfolk native began practicing law in Charlotte in 1969 as a part-time district court prosecutor. Eventually he started taking on domestic-law cases, and soon earned a reputation as one of the most feared, disliked and controversial lawyers in Charlotte -- one who loves the spotlight, doesn't mind getting his hands dirty, and revels in his self-appointed "one mean son-of-a-bitch" image. It's his fierce, take-no-prisoners style that has also made him so successful.

Diehl has defended some of Charlotte's most high profile and notorious characters. Last year, Diehl helped defend convicted murderer and ex-Panther Rae Carruth in the custody and child support case filed against him by the parents of Cherica Adams. Adams was the young woman Carruth was found guilty of helping murder, and who was also carrying his child.

Diehl also defended Charlotte Hornets co-owner George Shinn in a nationally televised sexual assault case brought against him by Leslie Price. This was the trial in which Diehl uttered those immortal words, "If she wasn't bitin', she wasn't fightin'."

"There wasn't a skeleton left in my closet," Price told CL last year, referring to the way Diehl mercilessly went after her during the trial.

Indeed, many a horror story has been recounted of Diehl intimidating and breaking down witnesses on the stand, and over the years he has become the bane of countless divorcees -- including the ex-Ms. Bruton Smith of speedway mogul fame. Other clients of note include former PTL top deputy Richard Dortch, Bhagwan Shree Rajneesh, the religious sect leader who was arrested in Charlotte, and the perpetually guffawing Johnny Frank Isley ("John Boy" of the John Boy and Billy Show), who Diehl defended on drug charges in 1990.

In one redeeming case, Diehl worked without pay in 1996 defending Charlotte Repertory Theater as it battled fundamentalists and conservatives in order to stage the play Angels in America.

9. The Black Prince
He's big, he's bad, and he'd just as soon shish-ke-bab you with his jousting lance as look at you. He's Sir Connor the Prince of Stockwell, better known as the Black Prince. And if you've ever been to the Renaissance Festival you've probably seen him engaged in bloody battle. A firm believer in the motto "Cheat to Win," the Black Prince says he's not above stabbing someone in the back or throwing sand in their face to emerge victorious.

"I really don't have a code of honor to break," he says. "When you're faced with mortal combat, there is no honor; I just want to make sure the other guy dies. I used to be a good guy with a bad attitude. Now I'm just a bad guy."

When he's not goring people from atop a horse or decapitating some unsuspecting soldier during battle, the Black Prince is actually a single father named Kevin Stillwell who lives in Mooresville. He's been playing the part of Sir Connor for 13 years as a member of the Hanlon-Lees Action Theater (named after a turn of the 20th century performance group). For about eight of those years, Stillwell has served as artistic director, writing scripts for the shows, training the combatants and choreographing the fight scenes. Stillwell was a theater actor in Boston when he first joined the Hanlon-Lees company in 1988. At the time he knew how to sword fight but had no real equestrian skills. He received a crash course in jousting, and within two weeks was doing battle.

Before settling in Mooresville, Stillwell toured the country with Hanlon-Lees for about seven years, pursuing other acting gigs during the off season. Stillwell worked recently on a Martin Lawrence movie called Black Knight, which was filmed in Wilmington. Stillwell plays the character Sir Edmund, and also worked behind the camera, training actors to sword fight and choreographing all the fight scenes. The film is due out in November.