What's behind the high cost of locally farmed holiday birds?

Every week, grocery store ads push holiday turkey prices ever lower; 99 cents a pound here, 89 cents a pound there. Walmart has had whole birds selling for 69 cents a pound since the beginning of the month. Eventually some stores will just give birds away as a promotion. The next logical step will be to have Harris Teeter pay us to take home the plumpest, juiciest Butterball to grace our Thanksgiving tables.

Meanwhile, in the calm green swath of Waxhaw that is New Town Farm, Sammy Koenigsberg gazes over his small flock of broad-breasted whites and quietly says, "I think we're at $7 [a pound] now." All of his 60 plus birds are spoken for, reserved with $40 deposits and a waiting list to boot. Many will cost over $100 when delivered fresh during Thanksgiving week.

The typical American shopper hunts down the most food for the fewest dollars, but a growing collection of local eaters spring for the gold standard at the holidays, paying big bucks for locally pastured birds. With such a wide divide in prices, this annual turkey fest serves as a prime example of the disparity between commercially grown food, and that raised on smaller, sustainably-minded farms.

Google "turkey barn," and you'll pull up image after image of vast manmade caverns carpeted with white-feathered bodies standing wing-to-wattle — and not doing much else. As with other meats, modern commercial turkey growers practice confinement farming, factoring out weather, predators and other natural risks while pursuing established formulas for pounds of feed in, pounds of meat out.

Anyone following the country's food debates knows there are disadvantages here: crowded birds get sick, so prophylactic antibiotics are added to the feed, facilitating the development of super-resistant diseases transferable to humans. Hormones boost growth, creating behemoth bids incapable of supporting their own weight. Injured birds are often trampled by their flock-mates, lost to the crowded conditions.

Yet the system does what it's designed to do, pumping out over five billion pounds of affordable turkey every year, according to the USDA. 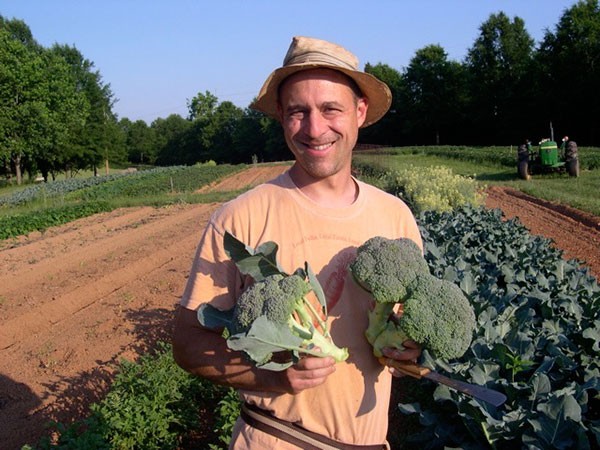 On Koenigsberg's farm, five dozen turkeys spread out across a small sunlit pasture, chirruping in surprisingly musical tones as they explore the grass, their feeders, or visitors crouching down for a photograph.

These may be happy birds, but the bucolic scene carries its own risks. Predators, weather and the birds themselves all pose threats at different stages of development.

Down the road in Monroe, "Farmer Dan" Kypena is only on his second year of turkey raising. Before adding them to Middle Ground Farm, he turned for advice to Koenigsberg and his 20 years of experience.

True to form, Kypena started out with 24 birds, and a week prior to processing them, was down to 13. "In the early stages, when you're brooding them, they're really fragile," he says.

When the day-old chicks arrive in July or August, they spend two or three weeks in brooders, small enclosures equipped with heat lamps keeping the temperature around 90 degrees. Anything colder can be deadly. Koenigsberg recalls standing outside his roofed brooding shed blocking a hard September rain with tarps, but still incurring heavy losses.

Post-brooder, the turkeys go through a two-stage graduation onto pasture, first inside open-bottomed mobile coops, and then onto open grass hemmed by movable electric netting. Both are relocated every day, sometimes twice a day, making them more labor-intensive than large-scale commercial barns.

This open-air housing also exposes the flock to possible predator attacks, especially from coyotes and raptors. Inside the larger pasture, Koenigsberg points to netting hanging down one open end of a high arched shelter, designed to deter nighttime owl raids.

"We had one move where we had left both sides open," he says, "and that night we lost three birds."

Even if the predators don't succeed in catching a turkey, they can send the flock into such a panic that some birds are crushed in a pileup or a stampede.

Middle Ground Farm uses livestock guardian dogs to protect all its livestock. Inside the turkey pasture, a large white Great Pyrenees-Anatolian mix named Chunk keeps watch day and night. An innocuous great blue heron cruising over the neighbor's land sends every dog on the farm to that end of the property with echoing barks. "We have not lost a single animal to predators," Kypena says.

Aside from the greater risks and labor involved in raising turkeys on pasture, both these farmers have assumed additional costs in using certified organic feed — even foraging birds need additional feed to reach weight in time for Thanksgiving.

Still, Koenigsberg finds turkeys to be a profitable late-season addition to his farm's revenue, providing a "getcha through the winter" cash infusion. But for both men, the birds provide other important, if less tangible benefits to the small farmer.

"Turkeys are a very enjoyable creature to raise," says Koenigsberg. "They sing when they get to new pastures; they come running to you when you walk out to them, and not just for food. They would follow us back to the house if there weren't a fence."

The two farmers also find satisfaction in raising turkeys "the right way," as Kypena says. He enjoys watching the birds live a healthy lifestyle, even posting a video online demonstrating their ability to run.

"You show me a factory-farmed bird that can run like that," he says.

And, as Koenigsberg says, in addition to more flavorful meat, pasture-raised birds also provide the consumer "the knowledge that this bird lived a good life, and was treated with compassion as a creature. This is perhaps the most important ingredient in a meal."