Spouses also wed to their restaurant 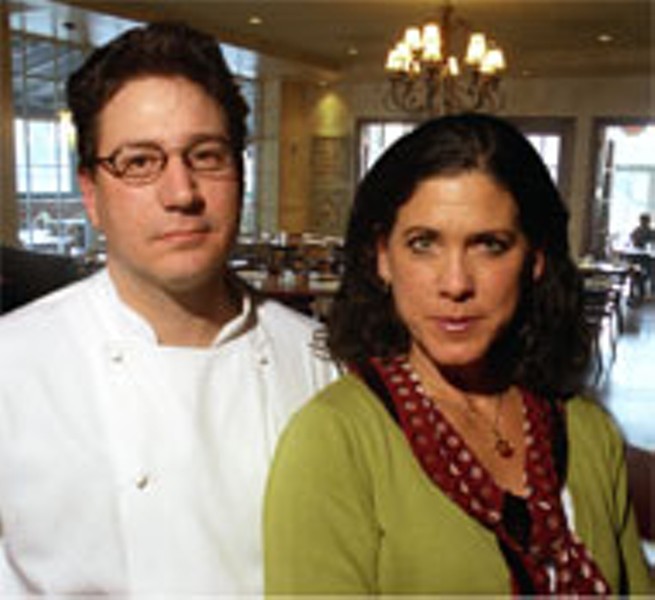 Radok David and Tammy Dearstyne
For some, it takes two to make a dream come true. Tammy and David Dearstyne of Dearstyne's Bistro and Catering are partners in life and partners in the restaurant business. With Tammy in charge of the front of the house and catering and David as Executive Chef, Dearstyne's is making its mark in Matthews.

"Dearstyne's truly is a bistro," states David. "A bistro is just a French term for a local restaurant that serves good food. It doesn't really have to follow a pretense or be formulaic; it can just be what it is, and that's kind of what we evolved from."

Tammy was first inspired by food and cooking when she became a vegetarian at the age of 12. "I loved making Middle Eastern vegetarian dishes," she explains.

After spending time in France, she fell in love with French food. "I spent a whole summer over there studying the language, and I just loved their food. I had never been a big eater or had all that much interest in food. Suddenly, it was like a light went off, and I had a passion for cooking."

Tammy's summer job at a resort helped her realize her love for the hospitality aspect of the business, and from there she decided to attend the Culinary Institute of America (CIA) for a formal education.

For his part, David started working in a restaurant at the age of 14. After seeing his neighbor attend the Culinary Institute, he knew what he wanted to do with his life. "I thought, wow, that's the job for me, so I went to the CIA," he reveals.

Tammy and David followed their passions and attended the CIA, where they briefly met, but it wasn't until six years later when the pair met again. This time, they each had gotten a job working for The Atrium Club, owned by Club Corporation of America out of Dallas. Tammy was the catering and service director while David was the chef. After working together for about three years, they married and spent five years in Tammy's hometown, Westchester, NY.

The couple made the move to Charlotte in 1994 when David got a job working for Providence Country Club, who had a contract with CCA. Four years later, David heard from a member of the club that there was some property for sale in Waxhaw, and so began the first location of Dearstyne's Bistro and Catering.

"We were drawn to the area," confesses David. "We saw the potential for growth and development and economic prosperity."

The restaurant opened with the same scenario as when the two had first met: Tammy in the front of the house and David in the kitchen. With Tammy's experience in catering, working for top five companies like Abigail Kirsch in New York, and David's experience cooking in grand hotels like The Breakers in Palm Beach, it proved to be a smooth transition.

"The menu is a collaborative brainstorming between both of us," explains Tammy. "It provides a lot of diversity, where people can come in for their casual meal or they can come in and fine dine."

After great success over an approximately four-year period, the restaurant outgrew the space in Waxhaw. They closed that location this past summer, though they had already opened the other restaurant in Matthews in 2002. Since then, food items such as the filet mignon and the chocolate bread pudding have become signature selections.

For the couple, many great memories have been created since the restaurant opened. "Wolfgang Puck came in one night," says Tammy. "He was having a dinner here with people from Wolfgang Express corporate. He was so down to earth, and he even went right back to the kitchen."

With a collection of over 400 cookbooks, the couple is continually inspired. As they note, "You have to be truly passionate to do this for a living."