Sympathy for the Devils?

In the sports pages of the nation's newspapers, North Carolina is always well represented. In the news sections we rarely appear, unless some spectacular crime or criminal -- Jeffrey McDonald, Velma Barfield, Eric Rudolph, Jim Bakker, Rae Carruth, Mike Peterson -- momentarily captures the tabloid imagination. If the crime involves race, like the current Duke lacrosse case, the national press from Oakland to New Haven sees our ancestral sins epitomized and magnified, even when the defendants are no more native to North Carolina than a bagel or a hockey puck. 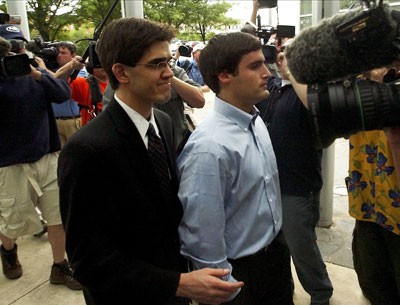 Our time has come again. Wise and thoughtful things have been written about this case, some of them by the faculty and administration of Duke University. Most reaction falls predictably along lines of race, class and gender, skewed slightly by the political correctness of educated whites who refuse to let the African-American community upstage their outrage. But when a black working mother and college student accuses white athletes from wealthy families of gang rape, deep nerves are pinched and people begin to betray themselves, revealing latent racial prejudices, as they betrayed themselves during the O.J. Simpson murder trial. I remember a strange conversation with a friend, a white woman of impeccable liberal credentials, who became enraged when I suggested that it might be condescending to accuse black jurors of acquitting Simpson out of racial loyalty.

I'm not talking about moral mutants like Rush Limbaugh. (Can it be true, as reported, that Limbaugh dismissed the Durham dancer as a "ho'"?) But it was a more respectable conservative, David Brooks of the New York Times, who struck a note that surprised and chilled me. I assume Brooks knows no more about the athletes' guilt or innocence than I do. What motivates him to call the rape case "a witch hunt"? What do we make of his unmistakable impulse to worry more about injustice to the white boys than to the woman who says they raped her? It's unseemly, I think. Knee-jerk reactions have been obvious on both sides, from both races. But are they knee-jerk reactions that deserve equal sympathy, in a place where raping a black woman was once a white man's prerogative, where winking at a white woman was once a black man's death wish?

It's a question of history -- history most reflective Southerners understand better than New York columnists or cable-news personalities do. If you feel protective toward kids who resemble your own -- many more media types are thinking, "They could be my sons," than, "She could be my daughter" -- it doesn't make you a monster. But only a truly obtuse individual would go public with those feelings and deny that it's a racial response.

We know for certain that one of these defendants, who lawyered his way around a gay-bashing incident in Washington, is an individual of questionable character and self-control. We know the team as a whole has a dismal history of disreputable undergraduate behavior. If I disparage them for that rude behavior, I'm afraid half my surviving fraternity brothers will turn up to denounce me as a flaming hypocrite. It may well be true that long ago, on another campus in a galaxy far away, I posed a similar challenge to the guardians of discipline and sobriety. There are living witnesses, several in North Carolina.

I don't remember hitting golf balls off the neighbors' houses; I surely don't remember raping anyone, or seeing it done, or hearing of it. But I was reckless and immature, and stumbled into situations that might help me to empathize with these outlaws, in spite of the distasteful details that attach themselves to their case. If three young men wind up in federal prison -- or even if the best lawyers money can buy win them a reprieve they may not deserve -- the 40-odd remaining members of the hard-partying Duke lacrosse team may find that their lives have changed forever. If there's any promise in their learning curve, several lessons have been absorbed already. One is about transactions involving sex and money and the stupidity of imagining that the one who sells surrenders more dignity or moral currency than the one who buys. A race factor compounds the bitterness of this lesson, which many men never learn.

But the great lesson they should have learned, if they're able to learn at all, is one that might make them better men and better citizens than the ones they would have become if no charges had ever been filed. It's a lesson learned too late by most children of privilege, who are blinkered well into adulthood by the myth of the affluent middle class -- the myth that elite lives proceed smoothly from triumph to triumph with nothing but glory down the road. But the awful, class-blind truth -- ask Duke lacrosse coach Mike Pressler, at the top of his world on Monday, unemployed and invisible on Thursday -- is that we live our lives with one foot on the banana, on the well-oiled roller skate peel. How quickly fortunes change, how very quickly it can all slip away.