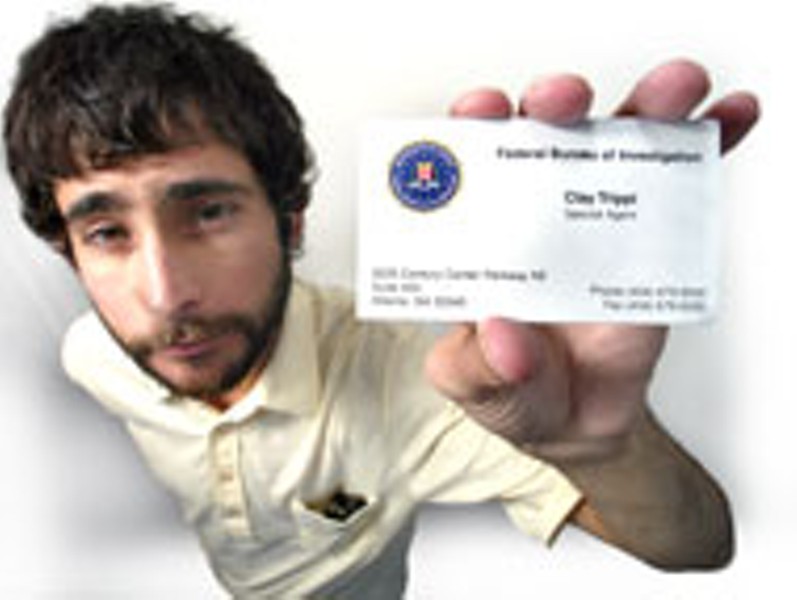 Jim Stawniak Marc Schultz with a fond reminder of his FBI visit.
"The FBI is here," Mom tells me over the phone. Immediately I can see my mom with her back to a couple of Matrix-like figures in black suits and opaque sunglasses, her hand covering the mouthpiece like Grace Kelly in Dial M for Murder. This must be a joke, I think. But it's not, because Mom isn't that funny.

"Two FBI agents. They say you're not in trouble, they just want to talk. They want to come to the store."

I work in a small, independent bookstore, and since it's a slow Tuesday afternoon, I figure, "Sure." Someone I know must have gotten some government work, I think; hadn't my consultant friend spoken recently of getting rolled onto some government job? Background check, I think, interviewing acquaintances . . . No big deal, right? Then, of course, I make a big deal about it in front of my co-workers.

They laugh; it's a good joke, especially when the FBI actually shows up. They are not the bogeymen I had been expecting. They're dressed casually, they speak familiarly, but they are big. The one in front stands close to 7 feet, and you can tell his partner is built like a bulldog under his baggy shirt and shorts.

"You Marc Schultz?" asks the tall one. He shows me his badge, introduces himself as Special Agent Clay Trippi. After assuring me that I'm not in trouble, he asks if there is someplace we can sit down and talk. We head back to Reference, where a table and chairs are set up. We sit down, and I'm again informed that I am not in trouble.

Then, Agent Trippi asks, "Do you drive a black Nissan Altima?" And I realize this meeting is not about a friend. Despite their reassurances, and despite the fact that I haven't committed any federal offenses (that I know of), I'm starting to feel a bit like I'm in trouble.

They ask me if I was driving my car on Saturday, and I say, reasonably sure, that I was. They ask me where I went, and I struggle for a moment to remember Saturday. I make a lame joke about how the days run together when you're underemployed. They smile politely. Was I at work on Saturday? I think so.

"Were you at the Caribou Coffee on Powers Ferry?" asks Agent Trippi. That's where I get my coffee before work, and so I tell him yes, probably, just before remembering Saturday: Harry Potter day, opening early, in at 8:30.

So I would have been at Caribou Coffee that Saturday, getting my small coffee, room for cream. This information seems to please the agents.

"Did you notice anything unusual, anyone worth commenting on?"

OK, I think. It's the unusual guy they want, not me. I think hard, wondering if it was Saturday I saw the guy in the really cool reclining wheelchair, the guy who struck me as a potential James Bondian supervillain, but no: That was Monday.

Then they ask if I carried anything into the shop -- and we're back to me.

My mind races. I think: A bomb? A knife? A balloon filled with narcotics? But no. I don't own any of those things.

Not the right answer. I'm nervous now, wondering how I must look: average, mid-20s, unassuming retail employee. What could I have possibly been carrying?

Trippi's partner speaks up: "Any reading material? Papers?" I don't think so.

Then Trippi decides to level with me: "I'll tell you what, Marc. Someone in the shop that day saw you reading something, and thought it looked suspicious enough to call us about. So that's why we're here, just checking it out. Like I said, there's no problem. We'd just like to get to the bottom of this. Now if we can't, then you may have a problem. And you don't want that."

You don't want that? Have I just been threatened by the FBI? Confusion and a light dusting of panic conspire to keep me speechless. Was I reading something that morning? Something that would constitute a problem?

The partner speaks up again: "Maybe a printout of some kind?"

Then it occurs to me: I was reading. It was an article my dad had printed off the Web. I remember carrying it into Caribou with me, reading it in line, and then while stirring cream into my coffee. I remember bringing it with me to the store, finishing it before we opened. I can't remember what the article was about, but I'm sure it was some kind of left-wing editorial, the kind that never fails to incite me to anger and despair over the state of the country.

I tell them all this, but they want specifics: the title of the article, the author, some kind of synopsis, but I can't help them -- I read so much of this stuff.

"Do you still have the article?" Probably not, but I suggest we check behind the counter. When that doesn't pan out, I have the bright idea to call my dad at work, see if he can remember. Of course, he can't put together a coherent sentence after I tell him the FBI are at the store, questioning me.

"The FBI?" he keeps asking. Eventually I get him off the phone, and suggest it may be in my car. They follow me out to the parking lot, where Trippi asks me if there's anything in the car he should know about.

"Weapons, drugs? It's not a problem if you do, but if you don't tell me and then I find something, that's going to be a problem." I assure him there's nothing in my car, coming very close to quoting Rudy Ray Moore in Dolemite: "There's nothin' in my trunk, man."

The excitement of the questioning -- the interrogation -- has made me just a little bit giddy. I almost laugh out loud when they ask me to pop my trunk.

There's nothing in my car, of course. I keep looking anyway, while telling them it was probably some kind of what-did-they-know-and-when-did-they-know-it article about the buildup to Gulf War II. Trippi nods, unsatisfied. I turn up some papers from the University of Georgia, where I'm about to begin as a grad student. He asks me what I'm going to study.

"Journalism," I say. As I duck back into the car, I hear Agent Trippi informing his partner, "He's going to UGA for journalism," in a way that makes me wonder whether that counts against me.

Back in the store, Trippi gives me his card and tells me to call him if I remember anything. After he's gone, I call my dad back to see if he has calmed down, maybe come up with a name. We retrace some steps together, figure out the article was Hal Crowther's "Weapons of Mass Stupidity" from the Weekly Planet, a free independent out of Tampa. It comes back to me then, this scathing screed focusing on the way corporate interests have poisoned the country's media, focusing mostly on Fox News and Rupert Murdoch -- really infuriating, deadly accurate stuff about American journalism post-9/11. So I call the number on the card, leave a message with the name, author and origin of the column, and ask him to call me if he has any more questions.

To tell the truth, I'm kind of anxious to hear back from the FBI, if only for the chance to ask why anyone would find media criticism suspicious, or if maybe the sight of a dark, bearded man reading in public is itself enough to strike fear in the heart of a patriotic citizen.

My co-worker, Craig, says that we should probably be thankful the FBI takes these things seriously; I say it seems like a dark day when an American citizen regards reading as a threat, and downright pitch-black when the federal government agrees.

Editor's note: Special Agent Trippi didn't return telephone calls seeking comment, but Special Agent Joe Paris, Atlanta field office spokesman, stressed that specific FBI investigations are confidential and would not confirm or deny the Schultz interview. "In this post-911 era, it is the absolute responsibility of the FBI to follow through on any tips of potential terrorist activity," Paris says. "Are people going to take exception and be inconvenienced by this at times? Oh, yeah. . .A certain amount of convenience is going to be offset by an increase in security."

Marc Schultz is a freelance writer in Atlanta. Hal Crowther's story ran in Creative Loafing, from which our sister paper in Tampa, The Weekly Planet, picked it up..