Concerts coming to Charlotte: A rundown of the good, the bad and the ugly

by The Creative Loafing Editorial Staff

Most people are ready to listen to music under the sun or stars when the summer concert season arrives, but there's as much going on indoors this year as there is at Charlotte's two outdoor amphitheaters. Here's the official CL take on a few dozen upcoming shows:

JUNE 2 — Is it love or is it Auto-Tune? Is he Rembrandt or is Future just another naked emperor? More importantly: who on CL's staff — me or Jeff Hahne — has drunk the Pitchfork Kool-aid on this guy? Hint: I dig Kraftwerk and think Auto-Tune sounds pretty cool. Catch Future at... The Fillmore. (Mark Kemp)

JUNE 6 — Grammy-winning guitarist Alvin Youngblood Hart is one of the flagbearers of country blues who's keeping a strong sense of the traditional alive. Double Door Inn. (Jeff Hahne)

JUNE 7 — Face it, Jimmy Buffett's "Parrotheads" don't care what kind of bird crap the king of Key West (we know he doesn't live there anymore) slings their way. They'll still eat it up with a spoon and wear a coconut bra and hula skirt while doing it. Verizon Wireless Amphitheatre. (Hahne)

Ohmygod! Ohmygod!
No need for verbiage. This pic of music journalist Melissa Maerz (left, in case you missed the pained expression) with a gaggle of One Direction fangirls in Texas — tells exactly what we can expect when the Brit-teen hearthrobs invade the Queen City. (June 27, Time Warner Arena) (Kemp)

JUNE 9 — Gov't Mule knows what works and sticks to it. Frontman Warren Hayes is the human embodiment of Southern rock — a gravel-voiced guitar shredder who oozes as much soul as an entire gospel choir. Charlotte is one of five shows that will also feature New Orleans funk/jazz legend Dr. John. Expect to hear an update of the good Doctor's growling vocals and rootsy piano stomp. Time Warner Cable Uptown Amphitheatre. (Allie Goolrick)

JUNE 12 — Ron Paul Libertarian Sara Evans started out in the '90s as a Patsy Cline wannabe, then matured into one of the tougher female mainstream country vocalists of the pre-Gretchen/pre-Miranda era. But it's been six years since Evans' wildly successful '05 LP Real Fine Place. Her newest, Stronger, is a chin-scratcher, as Evans tries to cram five years of new-country trendage into one disc. Still, onstage she's is a siren. Coyote Joe's. (Kemp) 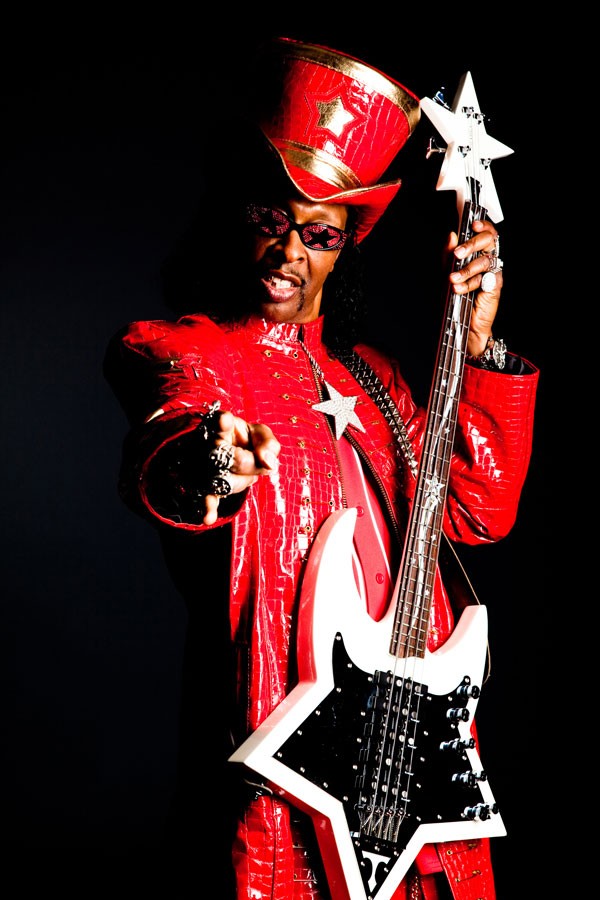 JUNE 18 — Bootsy Collins is the freak king of out-there bassists. Without Collins there would be no Flea, most obviously, but the jam world owes Collins a huge debt, too, with some of its most visible low-end players — Victor Wooten, Les Claypool — owing a ton to this legend of weirdo psychedelic space-soul. As into those dudes as you may be, here's an opportunity to see the genuine stylistic item with his star-shaped bass. Neighborhood Theatre. (Corbie Hill)

JUNE 19 — We don't know what the silliest thing is about saccharine radio dance-pop act LMFAO — the hair, the glasses, the lyrics or that these guys ever got famous in the first place. Bojangles' Coliseum. (Rachel Bailey)

JUNE 19 — At only 20, Hunter Hayes is already getting hyped as the "next big thing" in pop-country. Thankfully, the multi-instrumentalist has the chops to back it up. Epicentre Pavilion. (Hahne)

JUNE 22 — "Shining Stars" after more than 40 years, the funk and soul of Earth, Wind & Fire can still produce more than a stiff breeze. Ovens Auditorium. (Hahne)

JUNE 26 — Jack Black's musical comedy may be a little tired by now, but darned if he doesn't have the pipes to keep the vocal antics of Tenacious D interesting even when his humor's gone a bit stale. The Fillmore. (Bailey)

JUNE 28 — The third album from Raleigh's classical-indie hybrid Lost in the Trees — A Church That Fits Our Needs — is one bitch of a listen, as leader Ari Picker's song-cycle deals head-on with aging, death and the utter pain and confusion of losing a parent to suicide. It's also absolutely stunning, and this should be a must-see on your list of summer shows. Visulite Theatre. (Kemp)

JULY 10 — Roger Waters is bringing The Wall to town, but all in all it's just another brick in the mall. Time Warner Cable Arena. (Moran)

JULY 11 — DJ, producer and Chicago house-music adherent Kaskade made a splash in the EDM scene by mixing utilitarian dance floor thump with the yearning emotion of melodies straight outta the New Order playbook. Female vocals, ranging from Goldfrapp gamine to Grimes' aerie faerie spookiness, float atop the buzz saw electro crunch. When it all comes together, the result is instantly memorable and moving dance pop. The Fillmore. (Moran)

JULY 12 — Enanitos Verdes are not the creative genre-jumpers that some other early- to mid-period rock en español acts became (think fellow Argentineans Soda Stereo, Colombia's Aterciopelados or Mexico's Café Tacuba), but the Enanitos have made consistently pleasant melodic bar pop that any self-respecting Beatles fan would appreciate. The Fillmore. (Kemp)

JULY 14 — Jackson Browne's glory days as eco warrior Running on Empty have faded, but he stays relevant despite the odds. Tagged the original uber-sensitive Laurel Canyon singer-songwriter, Browne's literate mix of the unflinchingly personal and the ferociously activist blows away all stereotypes. A remarkable writer, performer and humanist. Belk Theater. (Moran)

JULY 21 — If your idea of a swingin' good time is a night of hard-core, tears-in-your-beers, pedal steel-fueled certified country music with a deep, gruff, bad-ass, wounded voice delivering quintessential honky-tonk moaners like "yes it's true that cheaters always lose," you will be at this Whitey Morgan show. Puckett's Farm Equipment. (Kemp)

JULY 27 — Childish Gambino earned his indie bona fides: likes Sleigh Bells (yay!) and Grizzly Bear (eh.). But can The Daily Show scriptwriter (aka Donald Glover) effectively transform into his Childish alter ego — he of lines like "Are we dating? Are we fucking? Are we best friends? Are we something in between that?" — onstage? If you're not there, I'll report back to you. Time Warner Cable Uptown Amphitheatre. (Kemp)

JULY 28 — No one does wrenching heartbreak and steely resolve like Alison Krauss. Collaborating again with the effortlessly inventive Union Station after a seven year hiatus, Krauss keeps touch with her bluegrass roots while venturing further afield. Krauss' warm, full bodied vocals are organic and authentic, providing an emotionally powerful soundtrack to times of trial. Times such as these. Time Warner Cable Uptown Amphitheatre. (Moran)

AUG 3 — The Allman Brothers more often than not still crank out the blues-rock-free-jazz jams like they mean it, and Gregg Allman still moans "Went up on the mountain to see what I could see/The whole world was fallin' right down in front of me" like it really happened. And it did. Just skip that Skynyrd cover band. Verizon Wireless Amphitheatre. (Kemp)

AUG. 24 — Dethklok may not be as successful as their fictional alter-egos from Adult Swim's Metalocalypse (they're ranked one of the world's largest democracies by season 2), real-life Dethklok has no shortage of fans. Their songs have been featured on Guitar Hero, they've toured with metal giants Mastodon and High on Fire, and they do it all with a signature blend of good humor and sick riffs. Time Warner Cable Uptown Amphitheatre. (Bailey)

AUG. 25 — You say you don't wanna be a Republican, but you also don't wanna be considered a pussy. You may have Toby Keith Syndrome. TKS is a tragic illness whose sufferers are as reactionary, xenophobic, lynch-happy, warmongering and weirdly bigoted as their far-right Republican buddies. Those suffering from TKS can gather in solidarity this summer at Verizon Wireless Amphitheatre. (Kemp) 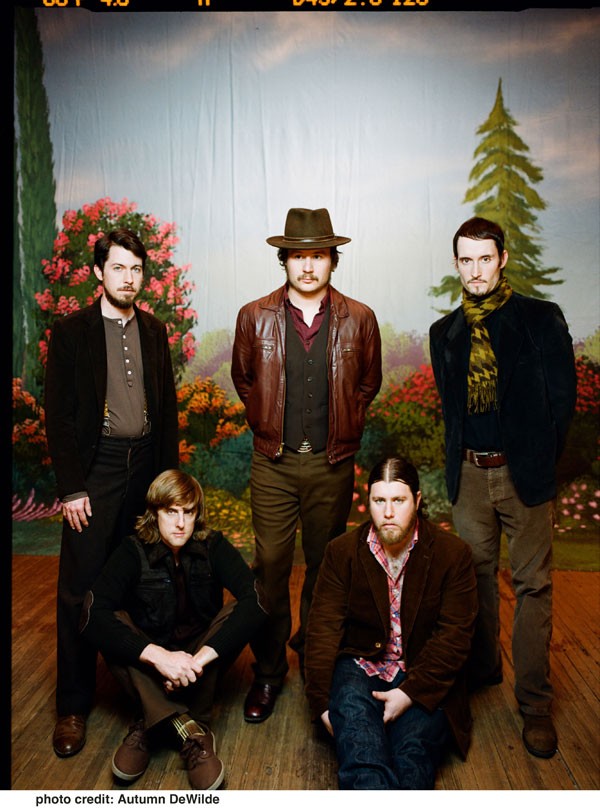 AUG. 25 — Whatever music-writing hack initially wrote that Kentucky's My Morning Jacket was Southern rock — something that was repeated ad nauseum for quite some time — did not understand Southern rock. That said, MMJ is a hell of a live act whose front man, Jim James, is one inspired pop-music eclectic. Time Warner Cable Uptown Amphitheatre. (Kemp)

AUG. 26 — Die-hards of jamband overlords Phish are no doubt already salivating at the group's return to the Queen City this summer — and with good reason. If flailing around to bouncy jams, hurling lightsticks or appreciating a good vacuum solo are your thing, Phish will deliver. But if the older crowd's continued loyalty is any indication, remarkable musicianship has always been the band's real draw. Verizon Wireless Amphitheatre. (Goolrick)

SEPT. 17 — What I wrote about Metric on eMusic.com a few years ago still stands: "updated, politically charged new wave with smarts and a mathematical precision that comes from Wire by way of Elastica." Likey? Go seey. The Fillmore. (Kemp)

Dead Poets Society
For those who insist on seeing oldies acts whose absolutely essential and irreplaceable front men (or, in one case, potential serial killer) has died, you get THREE chances this summer. You can go watch Jackie, Jermaine, Tito and Marlon, aka The Jackson 4 (July 7, Time Warner Cable Uptown Amphitheatre) sing every part to "I Want You Back" and "ABC" except for, you know, Michael's lead vocals. Or you can check out Ronnie Van Zant's kid brother Johnny warble the words to "Free Bird" when the cover band that calls itself Lynyrd Skynyrd opens for the Allman Brothers (Aug. 3, Verizon Amphitheatre). Or you can watch some anonymous new frontman not threaten to commit suicide onstage — and, god willing, not share too many of his precious bodily fluids — when said no-name fronts not-so-dearly-departed GG Allin's old band the Murder Junkies (Aug. 18, Tremont Music Hall) on lovely ditties like "Bite it, You Scum." Hooray for exploitation! (Kemp)