How about another round?

We would tell you how the popular Charlotte culinary web series OrderFire came about, but nobody really knows for sure.

"Marc [Jacksina, host of OrderFire] and I have slightly different memories of how it all came together," says director/producer Peter Taylor. "It's kind of funny because I've been trying to nail him down like, 'We have to tell one story, Marc.' But his memory is his memory and mine is mine."

I speak with the pair separately and get their respective versions of the story of how they thought up the series, which features in-depth, on-camera interviews — better described as conversations — with some of Charlotte's brightest culinary minds.

Their recollections don't differ greatly: Once Jacksina left his high-stakes, high-dining job for a more laid-back gig at Earl's Grocery, he began kicking around ideas for what he should do with his free time — something that had been foreign to him in his previous position. One day at Earl's, he ran into Taylor, who had recently invested in some video equipment and was looking for a worthwhile way to put it to use.

The two tell different stories of where and with whom the "Aha!" moment that birthed OrderFire's premise came, but there's one thing they both agree on: Once they premiered the first episode in 2016, the series took off well beyond either of their expectations.

About midway through the third season, OrderFire has packed the house during 18 free screenings at Free Range Brewing on North Davidson Street, while raising about $20,000 for area charities through raffles. Now, Taylor is launching the first OrderFire spinoff, DrinkOrder.

DrinkOrder, which premieres with four new episodes at Free Range on December 18, puts Bob Peters, renowned mixologist from The Punch Room, in the host's seat. And how did the idea for DrinkOrder come about?

I should've known before I asked.

The guys may be oblivious when it comes to the origins of these projects, but it's clear that the team has put in some real work — all on a volunteer basis — to make OrderFire as sharp as anything you'd see on television. The production values, helped along by the work of two-time Emmy Award winner Jeff Dubinsky, makes for a great watch whether you're Queen City foodie or a newcomer to the scene.

Taylor had worked as a still photographer for television and movies, from million-dollar movie sets to thousand-dollar commercials, and he says it made him aware of how a decent production should be run.

"I said, 'Let's do as big of a production as we can do with my little amount of gear, and let's try to do it right,'" Taylor recalls from his kitchen, where I meet him on a Saturday morning. "Let's have some movement, let's get the jib involved, let's work with a couple-camera setup, and that's the key. You can set up your iPhone here and record us talking, but it's going to be boring as fuck. We wanted to add as much production to it as we could with what we had."

The finished product blew Jacksina away, along with any doubts that were remaining from his original reluctance to participate in the project.

When Taylor first pitched him the idea of filming OrderFire, Jacksina played along, but didn't take it seriously.

The published poet had considered picking up his writing career again and possibly starting work on a new book. He remembers telling Taylor about wanting to do some food writing that would focus on chefs in the area and their personal paths, going beyond the cliché, "I grew up on my grandmother's apron strings" stories, as he calls them. When Taylor told him he had some new video equipment and they should record the conversations, Jacksina humored him.

"I'll be honest with you, I wasn't going to do it," Jacksina admits. "When he said that, it reminded me of when my uncle told me, 'Hey, you know what your poetry needs? A bongo playing behind it!' Like, 'Yeah, great idea, I'm not doing that,' because I think I know better. But I was trying to change my life around and do things differently. So Pete came back around and was like, 'Hey, I'm serious if you want to do it,' and I was finally at a point where I was like, 'I need to stop saying no, and start saying yes to some things,' so I told him, 'You know what, I'll absolutely do it.'" 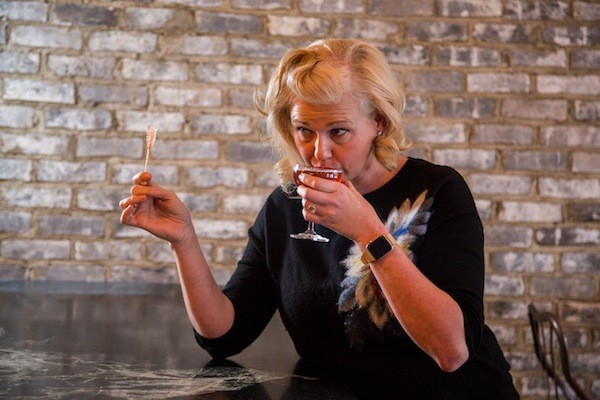 The series took off from there, with monthly screenings now averaging about 200 people, and sometimes double that. People come to the events from well outside of Charlotte, some from as far as Durham. They could just wait to watch them online, but that would defeat the purpose.

"It really is a community project, and that's the reason that I have no problem taking a little time away from my family," says Jacksina. "When we started, I said to Pete, 'Look, I've spent my entire career not being there for my family. I'm changing the way that I'm handling my career so that I can spend time with them. This thing is not going to take up the rest of my free time.' But going one day a month to do an OrderFire thing is kind of akin to going to church. Getting out to commune with people, it's been great."

When the crew got together to decide how they could capitalize on the popularity of OrderFire by creating more content, Peters' name immediately came to mind. A Season 2 OrderFire guest, Peters is an outgoing guy, and his name recognition in the Charlotte culinary and bar scenes made him a shoo-in to host the show.

Taylor admits there were plenty of directions OrderFire could have taken for a new series — craft beer, farmers' markets, etc. — but when one of the world's best mixologists is already a friend of the show and willing to help, then craft cocktails is the way to go.

"I would think one of the impetuses of that is that we had Bob attached," Taylor says. "How many movies are sitting out there waiting to be made, but then when you attach The Rock to one, it's going to get made. That's Bob. Bob's The Rock."

When Peters was offered the new gig, he immediately accepted, although it took some time for his new role to sink in. Although he's been behind the bar listening to people spill their life stories for nearly 20 years, the idea of doing it on camera was a new one to him. 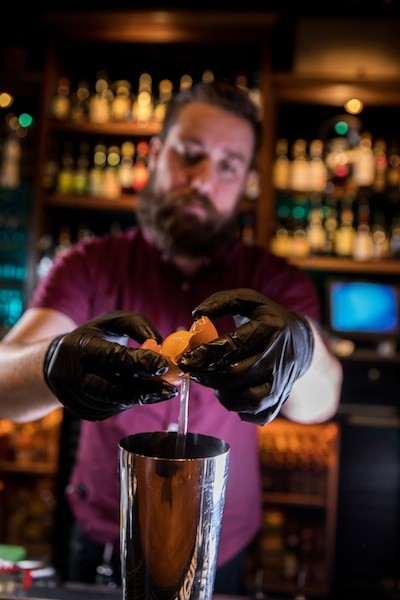 "After I got over the initial shock of them asking me to do it, I was honored," Peters says. "It's been a little bit of an adjustment. After I figured out the concept and what I would exactly be doing as host, I was talking with my wife about it, like, 'It's going to be a little odd being on that side of the interview. I've never done that before.'"

Peters isn't one to take a new gig lightly. He not only asked Jacksina for some pointers, but set up a mock interview with him at Taylor's house. They recorded the bogus episode (or maybe a bonus episode one day?) and the crew went over it, breaking it down for Peters' benefit.

"I always want to do it right," Peters says. "I always want to look like I know what I'm doing. I didn't want to go in there and just sort of get by. A large part of that is how well Marc did [on OrderFire]. He always did such a great job and seemed so very well prepared for what he was doing."

It made things easier for Peters that the first four DrinkOrder guests are longtime friends of his from the cocktail community: Kel Minton of Soul Gastrolounge, Colleen Hughes of Haberdish, Stefan Huebner of Dot Dot Dot and Brian Lorusso of Dogwood Southern Table and Bar.

Despite having shared countless long conversations with each of his guests, Peters said he was surprised to learn new things about each one.

The DrinkOrder premise differs a bit from OrderFire, as guests bring out three of their signature cocktails for Peters and explain the origins of each drink. While working on the episode, the crew was struck by the extent to which each person put their own stories into each of their signature drinks. 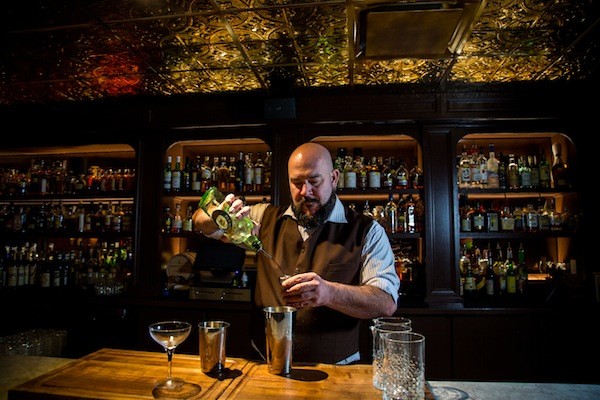 For example, Minton had a grandfather who smoked cigarettes and drank scotch. He inspired a cocktail for which Minton smokes tobacco into a glass (no, not with his mouth) before filling it.

"The directness of the conversations did enlighten me on some people that I call my friends already, so that was interesting," Peters says. "There were 'Aha!' moments in pretty much each of the interviews where they were pretty special. There was a lot of family stuff that came out in this, which just speaks to their personalities and what makes these individuals tick.

"So there's some pretty strong, meaningful things that come out in the cocktails about family ties," Peters says. "There are a couple tearjerker moments, I'm not going to lie. It sounds corny or silly, but I think it's true."

For Peters, DrinkOrder is an opportunity to connect an already thriving cocktail scene in Charlotte, as well as invite some others who may think of bartenders as just the folks who pour them a Pickleback on a Saturday night.

"I would like somebody who is not a part of the community to be able to take away the fact that some of these cocktails are extremely well thought out and extremely personal to the people making them, and a large portion of why they turn out and taste so beautiful is because there's so much love poured into them," Peters says. "That love is the human ingredient that DrinkOrder and OrderFire are all about; these people that are putting the love into these drinks and food dishes that really make them so special."

That's enough to convince us to stay for another round.