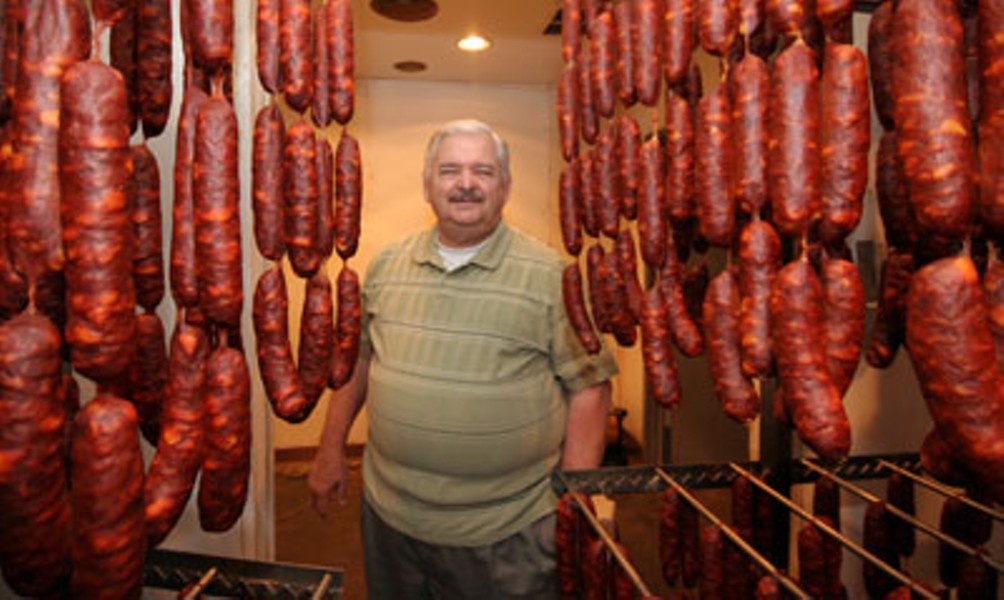 Andrew D'Rouco's family has been making sausages in his native Spain since at least the 1700s, perhaps even as early as 1610, which is about the same time North Carolina's original European colony was established. Skip forward 400 years. Today D'Rouco is making artisanal Spanish and Mexican chorizo sausages in an unlikely spot: Matthews, N.C.

"I'm the first one in the Carolinas to make chorizos," D'Rouco reports proudly, his Galician accent almost as thick as his sausages.

D'Rouco's path to this avocation has been circuitous. His family is from La Coruña, a city in the northwestern corner of Spain and part of the autonomous Galicia, a province that juts out into the Atlantic Ocean and borders Portugal to the south. D'Rouco, now 71, left Spain as a child at the beginning of the Spanish Civil War. His family spent time in Cuba before moving to Miami. While in South Florida, he met his wife, they had six children and he eschewed his training in electronic engineering to become an employee of the U.S. Postal Service. In 1985 the Postal Service offered him and his family the chance to move to Charlotte and they did, moving to an area of Matthews once thought of remote, now burgeoning with the suburbs and a nearby I-485.

During D'Rouco's career with the Postal Service, he met many of Charlotte's culinary Spanish expats, including Rudy Montero (Tio Montero), and Gino and Isabella Macchiavello (L'Spiedo). (All three of these talented chefs were past winners of Creative Loafing's Best of Awards.) They get together and, at times, try out the new Spanish restaurants in town. ("They look good," he wryly noted.) But at the heart of it, the foods these ex-pats make at home fill their soulful needs and D'Rouco has become known for the sausages he has been creating from his grandmother's recipes. After all, his native Galicia is known for its sausages: androlla, botelo, salchichónes and the dry-aged chorizos.

Moving from a hobbyist to owning a USDA-inspected food processing plant took a few years after D'Rouco retired from the U.S. Postal Service in 2003. His company D'Rouco Chorizos first sold its sausages in 2005.

A smoky aroma floats in the air on the days the D'Rouco Chorizos is filling orders. Ask his neighbors. One admitted it's hard not to go to lunch early on sausage days. The company doesn't have a marked door. "Why should I?" D'Rouco shrugged. "I have a distributor -- I don't sell here."

The sparkling interior has the faint perfume of smoke and garlic -- the best fragrance of a tapas bar. Tapas bars, D'Rouco tells me, used to give the food away. "You would buy a drink and they would give you some chorizo or something. Now they charge."

In one room are a gleaming stainless grinder and the sausage extruder. Down a hallway is the large walk-in containing pork from du Breton Farms, a Canadian meat company in Quebec that gets its meat from small, family-owned farms. Du Breton's pork is antibiotic free and the pigs have all-vegetarian diets and humane living conditions. "Nothing artificial." D'Rouco notes. He reaches into a refrigerator and draws out a competitors' Mexican chorizo. "Read the ingredients," he insists. Salivary glands, lymph nodes, cheeks, textured soy flour, sodium nitrite. "You want to try," he offers. I scrunched up my nose in cross-cultural acknowledgement.

D'Rouco's artisan sausages, on the other hand, only use natural ingredients: pork, sea salt, garlic, wine, a pinch of oregano and smoked paprika. He imports the smoked paprika from Spain. The best quality Spanish paprika is smoked over Encino oak to achieve that deep rusty color and comes in mild (dulce), medium hot (agridulce), and hot (picante). D'Rouco makes two styles of Spanish chorizos: mild and spicy. But this kind of spice is not to be confused with Mexican chorizo.

About 75 percent of his company's orders are for Mexican chorizo. The primary difference is the piquant chilies, which are added to the Mexican sausage. Spanish chorizo is not made with these New World chilies but the milder smoked and ground Spanish peppers used in the Spanish paprika. The Mexican sausage is softer and hot. However, all D'Rouco sausages are packed in natural casings and then dry-cured, in time-honored Galician style.

D'Rouzo is not surprised by the demand for a high quality Mexican chorizo either. With the number of Latinos choosing Charlotte as a home, orders for his Mexican chorizo grows as well.

Currently, D'Rouco is developing a recipe for chouriço, a spicy Portuguese smoked sausage. He says that even though the market may not have the demand, he needs to make it. "Our foods and Portuguese are similar," he notes as he pours a glass of Portuguese wine, a tempranillo, and offers some chorizo pate on a cracker. He leans back into his chair. "I gave some of this [pate] to my friends to take back home to Spain and have their relatives try this -- compare it to what's there. They said it was good ­­-- very good."

Will D'Rouco Chorizo be a family business? Even though D'Rouco has six children, all are currently involved in careers, except his youngest, who is finishing law school in Chapel Hill. But D'Rouco insists it would take time to develop the sense of taste needed to run the operation anyway, and he has seven decades worth of experience.

Traditionally Spanish chorizo is sliced and served with cheese, cooked in stews, or eaten with eggs for breakfast. D'Rouco Chorizos are available at Harris Teeter, in several Latino grocers, and through La Tienda, a Spanish webseller (www.tienda.com).

Have a restaurant tip, compliment, complaint? Do you know of a restaurant that has opened, closed, or should be reviewed? Does your restaurant or shop have news, menu changes, new additions to staff or building, upcoming cuisine or wine events? Note: We need events at least 12 days in advance. Fax information to Eaters' Digest: 704-944-3605, or leave voice mail: 704-522-8334, ext. 136.