I joined Bokar Diaby about an hour into his three hours of daily canvassing. He didn't look comfortable, with his black T-shirt sticking to him in the 90-degree heat.

I asked if he enjoyed this part of the 12-week fellowship he's participating in this summer with the Students for Education Reform Action Network (SFER AN), an advocacy group that works to improve the educative experience for children often left behind.

Diaby gave me a skeptical look. He had been systematically working through a list of addresses of frequent voters compiled by SFER AN organizers, but in the 30 minutes I spent with him, he hadn't reached any of them. We were walking through an apartment complex in east Charlotte with a heavy Latino presence. The sight of two guys walking around with a clipboard, knocking on doors seemingly at random drew suspicious looks. We would often hear someone inside who wasn't coming to the door.

Diaby prefers setting up shop at community events or busy parts of the city for these outreach efforts, during which he attempts to converse with community members to hear their concerns with local education so SFER AN can build an agenda around the community's needs.

Diaby, 20, stays positive. He's aware that many people his age are spending these summer days sitting poolside or stacking money at a part-time job, but there's nowhere else he'd rather be.

"I really do enjoy it when I end up having a great conversation with someone, connecting with them. That makes it worth it. But all these non-answers? It can feel like a three-hour conversation with yourself," he said.

Diaby is one of 17 students — mostly from North Carolina colleges, with one in middle school and one in high school — spending their summer with the SERAN fellowship, the first of its kind in North Carolina.

The students spend their mornings each day workshopping, discussing local education issues and learning more effective advocacy techniques. They also break down what's been working and what they've learned during the afternoons, which they spend on outreach activities like canvassing or phone banking. They're encouraged to break these molds throughout the summer and introduce new ideas for outreach.

The fellowship is aimed at getting young people more actively involved in politics and advocacy and showing them how careers in both fields are legitimate options for people coming out of college. It's being run by three 20-somethings from Charlotte with plenty of experience in the field.

Kayla Romero, 28, is a former teacher at Ranson Middle School in north Charlotte. After leaving Charlotte-Mecklenburg Schools, she worked with O.N.E. Charlotte, another group working locally for educational equity, before taking a full-time job with Students for Education Reform last year. For the fellowship, she brought on Albemarle Road Elementary School teacher and Teach for America fellow Meg Judy, 25, and Lula Dualeh, who recently ran to replace Vilma Leake as District 2 representative on the Mecklenburg Board of County Commissioners.

"One of my own personal goals starting out is that I'm interested in making organizing sexy; making politics and the entire political process sexy," Dualeh says.

Dualeh will be the youngest elected committee member from the North Carolina delegation at this year's Democratic National Convention in Philadelphia. For Romero, she sets an important example for the fellows, all of whom are people of color and most of whom are women of color.

"I think more so than race or socioeconomic background, it is age [that keeps people from running for office]," Romero says. "I really gained a deeper understanding of that when Lula was running and we were talking about the establishment being this older force. That's one reason I was super excited to hire Lula, and this has already come through to our fellows. They've immediately seen and identified with her as a 28-year-old woman of color. We've had some fellows just literally see the door open for them."

Dualeh values the power of the vote, but she and Romero hope to change the narrative from one in which you hold politicians accountable by voting them out of office to one that includes running to replace them.

"We're changing this image or misconception around organizing and politics and that it's only reserved for a certain demographic," Dualeh says. "We're shattering all of those misconceptions this summer, so the fact that [these specific students are] here and we're together isn't by chance."

The three team members and others with SFER AN traveled the state recruiting motivated students from schools like Eastern Carolina University to UNC Greensboro. They also recruited students from historically black colleges and universities like Johnson C. Smith and North Carolina Central universities and community colleges like Central Piedmont Community College.

"We've gone above and beyond to make this program accessible to students who may be coming from low-income families or maybe feel like they didn't get the best education and don't consider themselves organizers or activists already," Romero says.

The fellowship is just the first step in growing SFER AN on North Carolina campuses beyond the two chapters that currently exist at UNC Chapel Hill and Wake Forest University. Students are encouraged — and many are excited — to return to their respective campuses and begin chapters there. The focus of the last four weeks of the fellowship will be on the "nitty-gritty" of actually forming a chapter, Romero says.

"We want the students to drive the agenda, so the more students we have coming from local schools, they can help inform what we need to really act on," she says. "We're using this as an opportunity to recruit and retain new members to grow our overall base and help be more effective in our issue choice campaigns."

Each fellow brings their own inspiration for joining SFER AN, while all fight toward a common goal. Some came from nothing and witnessed what life in a low-income school is like, while others have enjoyed a privileged educative experience and want everyone to have that opportunity. 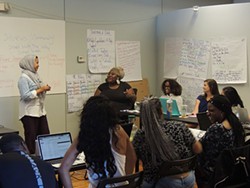 Diaby, for example, was inspired by the lack of higher education in his birthplace, Guinea. He hopes to use his civil engineering degree to return some day and build a university there. Aleisha Murrell, 22, transferred from Vance High School, a Title I school in north Charlotte, to Ardrey Kell High School in a well-off south Charlotte neighborhood.

"I moved to the south side and began going to Ardrey Kell, which is predominantly white, and saw the difference," Murrell says. "The understaffed teachers [at Vance], the system and all of its functions in the two different schools really affected me. I wasn't even thinking about college my freshman year when I attended Vance. Now I can proudly say that I'm on a full-ride [scholarship] at UNC Charlotte. It just really shows the mindset that I had and the effect that the atmosphere played on me."

Na'ilah El-Amin, a 20-year-old UNC Charlotte student, joined SFER AN because she recognized the privilege she grew up with. The 2013 Mallard Creek High School graduate said she understands that many others aren't offered the opportunities she was.

It seems the SFER AN team made the right choices in their recruitment, as the fellows have been active in the community from day one and are already making themselves heard. They showed up in full force at a recent "Black Lives Matter Charlotte" forum on educational disparity hosted by The Charlotte Post. Most of them stood and asked questions at the event. El-Amin asked the panelists what CMS administration is doing to fix inequalities in the system, and returned to the microphone when her question was somehow turned into a discussion of what parents can do better.

It's just the second week of the fellowship, and many of the students hadn't participated in activism before starting with SFER AN the previous week.

For Dualeh, watching the students grow at such a rapid pace is worth all the time she's given from her summer to be with the fellows.

"Whenever you're learning something new, you connect with the person next to you in a way that you wouldn't normally," she says. "So the fact that they're literally leaning on each other while they're out canvassing every day, making sure that they're holding each other accountable, it's something beyond anything we could have expected. It's exciting because I know they're fostering friendships here and relationships that are going to last a lifetime."

For Romero, it's a sign of something bigger. "To me it means a revolution is honestly possible," she said. "A revolution is possible, it's in the process of happening, and it is necessary that we have a revolution — politically and socially — and it's going to be led by young people like it always has. 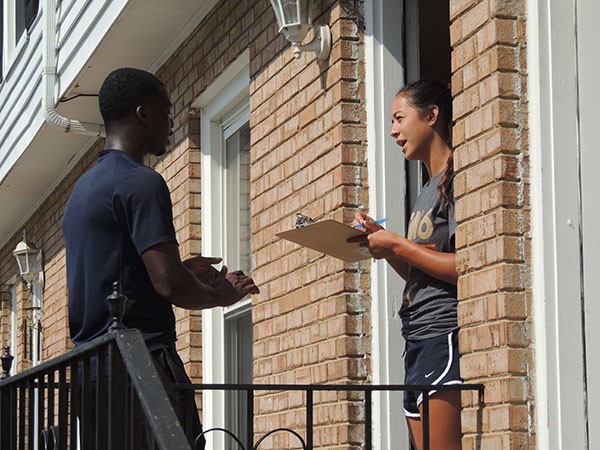 By that second week, Diaby was calling the other fellows his brothers and sisters. But on that sweaty afternoon that I met up with him while canvassing, he was alone and things were getting demoralizing. A kid yelled loudly from an upstairs window somewhere in the complex, calling us names while everyone else stared.

After 30 minutes of non-answers or people telling us we had the wrong address, a 21-year-old woman came to the door of one apartment. She wasn't whom Diaby was looking for, and is only in town for the summer, but she was immediately interested.

After a 10 minute talk, during which she signed a support card and promised to check out SFER AN's website, Diaby jumped from the porch with a new spring in his step.

He was visibly psyched after his conversation with Maggie, and admitted it right away. "That's what I was waiting for," he said, suddenly walking quicker.

I was happy for him. After all, I was getting ready to hop in my air-conditioned car and knew he still had another hour and a half of walking through the nearby east Charlotte neighborhoods, having a conversation with himself and waiting for that next door to open for him.