The best movies to watch about getting high — or while high 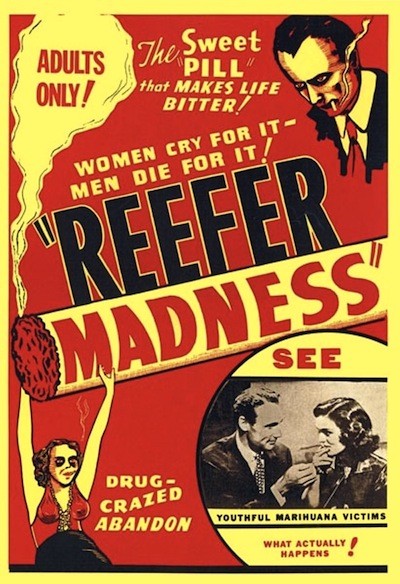 Reefer Madness, aka Tell Your Children, The Burning Question, Doped Youth, Love Madness (1938) As this legendary turkey so convincingly proves, it takes only a single puff on a marijuana cigarette to not only turn decent, cleancut kids insane but also drive them to — oh, the horror! — dance to fast music! The most famous of all the vintage exploitation movies from the '30s and '40s only gets, uh, better with age. The plot? A doctor warns parents about the evils of wacky weed by relating a story crammed with murder, suicide, attempted rape, hard liquor, and overly exuberant piano-playing.

Up in Smoke (1978) Cheech Marin and Thomas Chong prove to be irresistible anti-establishment figures in this consistently amusing dum-dum comedy. It's sloppy, crude and decidedly non-PC, but just try not to laugh when a coked-out partygoer unwittingly snorts a few lines of Ajax ("Good shit!" she declares), or after a poor police dog sniffs a van made entirely out of weed, or when Cheech explains that his undocumented relatives purposely called Immigration so they could get a free ride across the border into Mexico to attend a wedding. Added bonus: a great tagline ("You'll be rolling in the aisles!").

History of the World: Part I (1981) Mel Brooks' uproarious look at select historical events through a skewed prism isn't a pot film, per se, but it deserves inclusion for featuring what is probably the largest joint ever seen on screen. While being chased by Roman soldiers, Josephus (Gregory Hines) orders Comicus (Brooks) to stop the chariot once he spots "Roman Red ... a whole field of wacky weed!" Requesting some "rolling papyrus," he's then "armed with mighty joint!" — all the better to slow down Romans in need of some relaxation.

Friday (1995) Aside from the original Rush Hour, Chris Tucker found the best outlet for his manic, motormouth energy in this comedy in which he plays Smokey, a perpetually stoned neighborhood slacker who takes a, shall we say, philosophical approach to marijuana: "Weed is from the earth. God put this here for me and you." After Smokey tokes $200 worth of pot that he was supposed to sell, he finds himself in hot water, dragging his best friend Craig (Ice Cube) down with him. In addition to some crass laughs, Friday also offers proper puffing etiquette, courtesy of Chris: "Puff, puff, give. Puff, puff, give. You fuckin' up the rotation!"

Jay and Silent Bob Strike Back (2001). In this extremely vulgar but undeniably funny comedy, Jay (Jason Mewes) and Silent Bob (Kevin Smith), aka "the stoner fucks" (as one character calls them), head from their New Jersey turf to Hollywood to stop production of a film based on their comic book alter-egos, Bluntman and Chronic. Along the way, they briefly meet Scooby and the Mystery Machine gang, offering them what Jay dubs "doobie snacks." Casablanca employed "As Time Goes By" as its theme song, The Graduate used "The Sound of Silence," and Ghost utilized "Unchained Melody"; to reflect its milieu and motif, this film goes with Afroman's "I Got High."

Movies Under The Influence

Not that we're advocating breaking the law, mind you, but if you do find yourself indulging (maybe medicinal marijuana?), here are a few films that look great in an altered state.

2001: A Space Odyssey (1968) There's a reason this counterculture favorite was released with the tagline "The Ultimate Trip."

Yellow Submarine (1968) Let the Beatles tunes and those rapturous colors wash over you. But don't let the Blue Meanies make you paranoid!

Eraserhead. (1977) David Lynch's brilliant experimental film is mind-blowing enough when watched with a clear head; proceed with caution in any other condition.

Babette's Feast (1987) / Like Water for Chocolate (1992) / Eat Drink Man Woman (1994) OK, so potheads might find it a chore to focus on the English subtitles accompanying these foreign imports from Denmark, Mexico and Taiwan respectively, but the sumptuous dishes on display in these award-winning gems will dovetail nicely with those notorious munchies and lead to countless refrigerator raids.

Most Adam Sandler Vehicles (1995-2011) Maybe smoking a joint before consuming these turkeys will place the viewer in a more charitable state that encourages laughing — cuz that's the only conceivable way that films like Little Nicky and Jack and Jill could be anything approaching funny.

Features Friday weed pot 420 Reefer Madness Up In Smoke History of the World: Part I Jay and Silent Bob Strike Back influence high