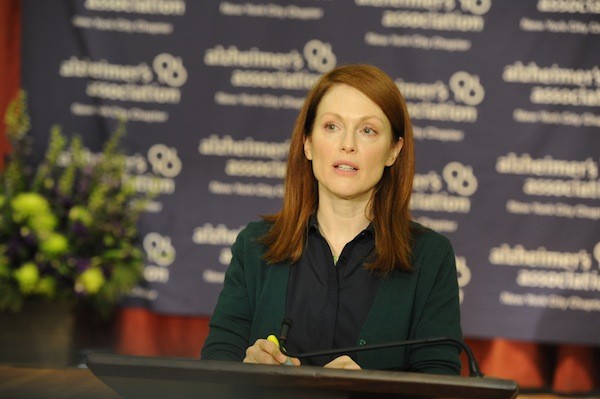 An absolutely devastating disease, Alzheimer's has been at the center of three films for which the top-billed star handily nabbed an Academy Award nomination for Best Actress. Judi Dench (Iris) and Julie Christie (Away from Her) lost their bids, but here's banking on Julianne Moore to take the prize for the new drama Still Alice.

Moore's would be a worthy victory, and not just for the side benefit of garnering more attention for a disease that's traditionally kicked to the sidelines when it comes to discussions and donations. It also wouldn't be for finally rewarding Moore, one of the great American actresses and a person who has delivered Oscar-caliber work before (by my count, she should already have a pair of Oscars for Boogie Nights and Far from Heaven, and, if we're being frank, hers was the more award-worthy performance in The Kids Are All Right than the one by Annette Bening). No, Moore deserves the gold statue for the simple reason that she delivered the best performance by an actress in a leading role throughout the duration of 2014. Only Wild's Reese Witherspoon and Two Days, One Night's Marion Cotillard came close.

It's apt mentioning the movies from Witherspoon and Cotillard because, in all three instances, the discussions have centered on the magnificent central performances and have tended to leave the films themselves as afterthoughts, akin to rickety star vehicles designed only with acting awards in mind (e.g. The Iron Lady). That's nonsense in all three cases, of course. And while Still Alice may not be as excellent as Two Days and especially Wild, it's still more than a generic Lifetime movie as its detractors would lead everyone to believe. Working from the novel by Lisa Genova, writer-directors Richard Glatzer and Wash Westmoreland (whose last joint project was 2014's woeful The Last of Robin Hood) have made a film that not only addresses the issues confronting the Alzheimer's victim — in this case, a notable linguistics professor suffering from early onset of the disease — but also those of the loved ones surrounding and supporting her. As Alice's husband and one of their grown children, Alec Baldwin and Kristen Stewart particularly make palpable the fears and frustrations felt by overwhelmed individuals unexpectedly cast in the roles of caretakers.

Still, for all the worthwhile contributions on both sides of the camera, it's the towering performance by Moore that clearly deserves the vast majority of the ink. It was no less heartbreaking watching the women played by Dench and Christie slowly losing control of their minds, but by making Alice a person whose entire career has been devoted to the study of language, of words, of dialogue, there's an added level of tragedy being brought into play. Here's an individual who lives for letters, and she can no longer enjoy the pleasures it provides or the career it sustains. Alice's beautiful mind has betrayed her, and Moore makes us feel that mental collapse even as her character plummets further down a rabbit hole ravaged by disease and despair.