Step Right Up for Your 'Fresh My Farm' Vegetables

The Gus’ Sir Beef crew turned a grammatical slip-up into a well-known slogan. (All photos by Alexandria Sands)

A couple mistakes made 49 years ago still make for some of the best marketing in Charlotte.

Whether or not you've ever eaten at Gus' Sir Beef, the first thing that comes to mind when you think of the restaurant at the corner of Monroe and Wendover roads is surely the sign. "The Original Gus's Sir Beef 'Fresh My Farm' Vegetables" it reads, and it's been confusing drivers in east Charlotte for half a century.

What is sir beef? And what in the world does "fresh my farm" vegetables mean?

According to the family that owns the restaurant, the phrase was coined accidentally by Gus Bacogeorge, a Greek immigrant who grew the restaurant's vegetables himself.

"He wanted to say 'fresh from my farm' but it always came out 'fresh my farm,'" said Gus' son Thrace, imitating his father's broken English in a quick, Greek accent.

Walking into the restaurant, diners are immediately faced with a framed black and white photo of Gus from 1972, proudly smiling with one of his first batches of fresh produce. To this day, the restaurant is known by its famous slogan "Fresh My Farm," which remains on the menu, next to any vegetables picked from the farm that day. 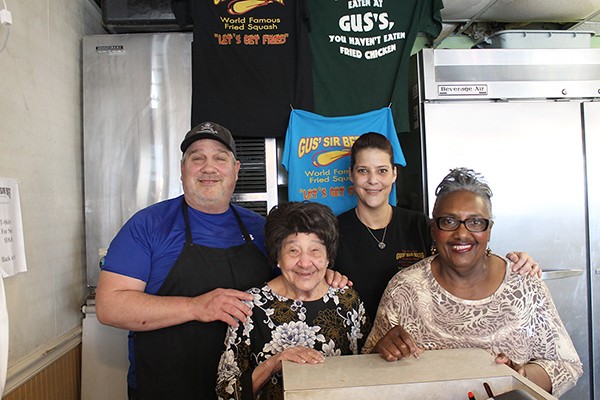 When Gus stepped on American soil in 1960, he had just $300 in his pocket. He found work as a dishwasher in New York, then a line cook in Virgina and slowly worked his way up through the restaurant business until he was able to move to Charlotte and become a co-owner, then full-owner, of Johnny's Drive-In Grill.

In 1967, however, the grill burned down. With a small business loan, Gus was able to build his own restaurant right across the street.

"Because the person he bought that restaurant from named his restaurant after him[self], my dad decided when he built his own, he was going to put his name in the name," said Thrace.

Gus wanted beef in the name so people would know what they served, but also wanted to include 'sir' as a sign a respect.

"Because he was an immigrant, he often wrote the way he spoke, which is broken English so instead of being Sir Gus' Beef, it came out Gus' Sir Beef," Thrace said.

Gus opened the restaurant on August 9, 1969. He was dedicated to serving quality, healthy food so he bought a farm in 1971 and started serving his own produce the following year.

"In my opinion, he was the first farm-to-table [restaurant] in Charlotte," Thrace said.

In 2000, Gus passed the restaurant down to his sons and Thrace later became the full owner. Thrace worked as an engineer for 15 years until Gus presented him the opportunity, and he couldn't pass it up.

His new career was familiar to him, since he had grown up in the restaurant. He remembers picking vegetables on the farm with his dad at 7 years old. As a child, he'd sit on the bar stools, which are no longer there, talking to his parents and drinking Coke floats before he'd leave to play in the neighborhood and come back before dark. As he got older, he'd do his homework in the booths and help bus tables.

"I watched back in the day when it was just this one room and the line would go from this door all the way over to that far window for lunch," said Thrace, pointing from the front to the back of the restaurant.

Thrace still owns the farm but hasn't found the time to grow it. He hopes to find the time again soon but, until then, he buys the vegetables locally.

Besides their famous slogan, Gus' Sir Beef is best known for their fried squash. In fact, if you look closely at the famous sign, the words "World Famous Fried Squash" can be seen, nearly gone after decades of wear.

Thrace's cousin owns a business in Myrtle Beach that will frequently get vacationers from Charlotte who talk about the fried squash.

"Any time somebody walks in the door from Charlotte or from the Charlotte area, he'll go, 'Hey, do you know Gus' Sir Beef?' and they'll say either, 'Yeah, fresh my farm,' or they'll say, 'Yeah, world famous fried squash,'" Thrace said.

With the help of a few family members, Gus tested a slew of different batters to perfect the recipe.

The restaurant also cooks their fried chicken made to order. Thrace makes sure it's always crispy and never greasy. He recently added grilled tuna and salmon to the menu and it's been a success.

But it's not just the food that keeps customers coming back.

"It's not the fanciest place in the world, but what we bring to the table is, when you come in here you feel like you're coming home," Thrace said. 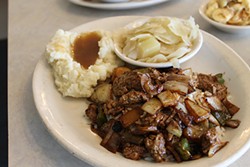 The restaurant has been open for 49 years now, but the waitresses still call you 'Hun' and Thrace still comes out of the kitchen to talk to the customers, the same way his father did.

In 2010, Gus passed away at age 87, but the following day, Thrace kept the restaurant doors open in honor of his father.

"My dad lived the American dream," he said. "That's what he came here for, to live the dream that everybody always talked about, you know, 'Come to America. It's the place where you can make a living, have a family and succeed.' And he did."

Now, nearly half a century after the sign went up, it's paying off in free social media advertising. On January 23, a new Twitter account popped up out of nowhere: @gussirBEEF. The account's avatar picture and profile picture prominently feature the famous sign, and the dry sense of humor seems to fit right in with the decision to keep up a sign with broken English for decades.

"I'll have to check that out," he said, shrugging.

If Gus' Twitter fan is lucky, there just might be some free fresh my farm vegetables in it for the savvy pollster.