Steady as they go: Enanitos Verdes

Four years ago, the last time Argentinean rockers Enanitos Verdes came to town, I jumped on the Neighborhood Theatre's stage to sing along to their ballad, "Luz de Dia." Lest you think I'm a crazed groupie who had to get escorted off the premises, let me clarify that the band asked for a group of ladies from the audience to get on stage — I was near the front row, so I obliged.

Was my voice the loudest? You could say that. Did lead singer Marciano Cantero have to ask me to please not touch his mic? Um ... perhaps. Was I the last one to get off the stage after bowing for my adoring fans numerous times? I will neither confirm nor deny.

I didn't know it at the time, but when I climbed onto that stage I was pregnant with my first child. Whenever I think back to that concert now, two kids later, I always remember it as my last hurrah — my last bit of totally carefree, uninhibited fun before plunging into the decidedly challenging and uncertain world of parenthood. It's fitting that I topped off my childless years with Enanitos Verdes, a band that has been making enjoyable, uncomplicated music for more than 30 years. 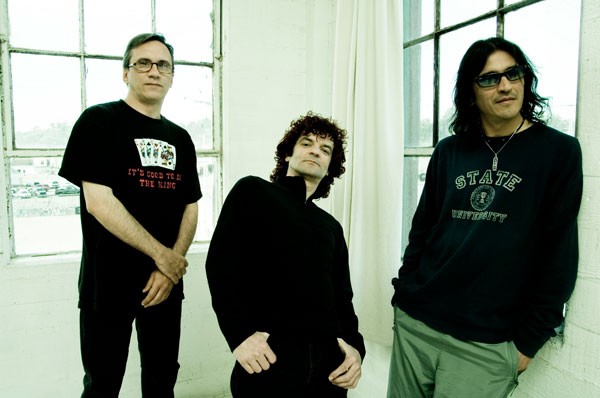 It's not an oversimplification to say the trio, whose name most accurately translates to English as "The Little Green Men," just plays rock — in Spanish. Bassist and singer Cantero, guitarist Felipe Staiti and drummer Daniel Piccolo don't fuse elements of traditional Latin music with electronica; they don't incorporate hip-hop; they don't bring out percussion instruments used by the indigenous peoples of South America. They play rock, in its lowest common denominator. And their songs have become anthems for an entire generation. Melodic and catchy, with lyrics that are neither overly profound nor trite, hits like "Muralla Verde" and "Lamento Boliviano" are the stuff Latin-rock cover bands are made of — the perfect tracks for loud sing-alongs — on or off a stage.

In today's rock en español, which includes the likes of Aterciopelados, Kinky and Café Tacuba, it's easy to dismiss Enanitos Verdes as a conservative and traditional act, but in 1979, when they first started making music, they were among the pioneers of a whole new movement. Before them, original rock music was reserved for the language of Shakespeare, and the few Argentine bands that did record in Spanish never attained international recognition.

Although Soda Stereo is usually credited as the first Argentine rock group to gain widespread popularity, Enanitos — which formed a few years before Gustavo Cerati's critically acclaimed trio — started making its mark all across Latin America around the same time. When the band's second album, Contrarreloj, hit the airwaves in the mid-'80s, few other Latin rock bands had the same level of recognition. Of those, a minuscule number has remained active or kept its original members to this day.

Enanitos' career hasn't always been seamless, however. The band broke up briefly in the late '80s, but when the members reunited in 1992, their album, Big Bang, spread like wildfire throughout the Spanish-speaking world. In the mid-'90s, the band started to get airplay on Latino radio stations in Miami and Los Angeles. Thirty years and 16 albums later, Enanitos continue to fill venues — stadiums in Latin America and clubs in cities like Charlotte — with adoring fans who recognize their undeniable contributions to rock en español.

When Enanitos Verdes hits the Fillmore's stage on Aug. 16, Charlotteans hailing from all over South and Central America will be there to experience one of the most iconic Latin rock bands of all time. Perhaps the critics don't find them as innovative or adventurous as some of the other, more modern purveyors of the genre. And it's true they've never won a Grammy. (Astonishingly, Wikipedia's entry on rock en español doesn't even mention them.) None of that will matter to fans when Cantero starts belting, "Yo solo quiero que nos dejen bailar," a line from "Guitarras Blancas" which translates to, "all I'm asking is that you let us dance." I guarantee you, every single person in the audience will be doing just that.