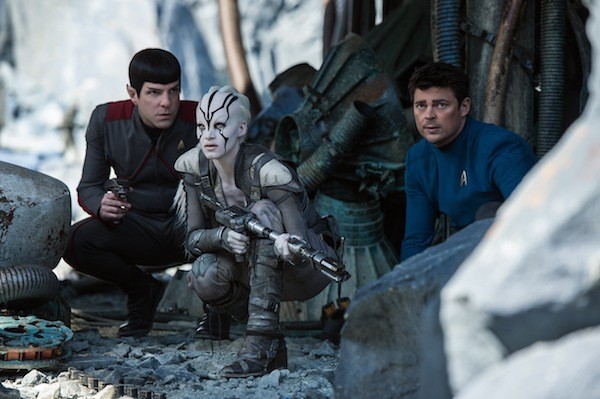 With the same level of heroism and determination exhibited by Enterprise crew members as they overcame Klingons, Romulans and William Shatner's stint in the director's chair, Star Trek Beyond finds all involved overcoming a troubled production history and shaky pre-release buzz to emerge as yet another winner in the new Star Trek franchise. Following 2009's popular Star Trek and 2013's controversial Star Trek Into Darkness (which has its detractors, though I'm not one of them), this third entry manages to travel at warp speed when it comes to delivering a satisfying mix of action, exposition, effects and — here's the real key — characterization.

Despite the shake-up of key personnel — Justin Lin (four of the Fast & Furious flicks) replaced J.J. Abrams as director and Simon Pegg and Doug Jung replaced Roberto Orci and Alex Kurtzman as writers — Star Trek Beyond operates in the same manner as the previous installments insofar as it cannily stirs memories of the original series as well as the motion picture offshoots. But even those not aware of the homages will immediately be absorbed into the story, as Kirk (Chris Pine) and Spock (Zachary Quinto) both contemplate leaving their positions aboard the Enterprise, albeit for very different reasons. Of course, such personal matters are placed on the backburner once an evildoer threatens the Federation — in this case, a snarling villain named Krall (Idris Elba). The starship subsequently takes a beating (to what extent, I won't say), and the crew members find themselves scattered across the landscape of a hostile planet.

It's at this point that the movie truly takes off, since the structure of separating the principals — Spock with McCoy (excellent Karl Urban, finally given more to do), Kirk with Chekov (Anton Yelchin, R.I.P.), Uhura (Zoe Saldana) with Sulu (John Chu), and Scotty (Pegg) with a marvelous new character named Jaylah (Sofia Boutella) — allows everyone a chance to shine. Add in a few nifty plot twists, some impressive stunt work, and a hefty amount of humanizing moments, and what's on tap is a tasty summer treat that deserves to succeed at the multiplex and beyond.