If these walls could talk

It's noon on a 92-degree mid-May day in Plaza Midwood, and Mike Wirth is standing outside staring at a wall.

In a paint-stained white t-shirt and shorts, he's looking at a sketch he just finished of a bunny holding a beer on the side of a restaurant called Peculiar Rabbit. He's coming to a realization that he's got more work ahead of him.

"Shit, the beer is crooked," he says, sweat running down his forehead. "I'm going to have to do something about that beer." 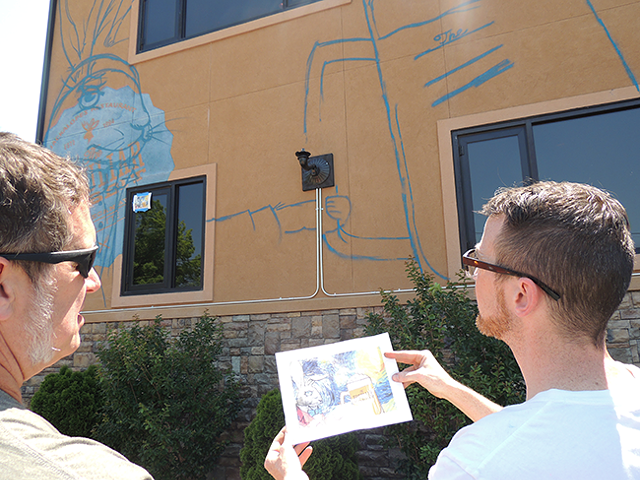 The sketch is just the beginning stage of a mural Wirth is working on for Peculiar Rabbit owner Rob Nixon. The two met at one of Nixon's other establishments when he noticed Wirth's paint-stained clothes and asked what he did for a living. Wirth, director of the art and design at Queens University, told him he'd been working on a mural, and Nixon's ears perked up. That weekend, he came to see Wirth paint live at BOOM Charlotte, a fringe festival in Plaza Midwood, and quickly commissioned him to paint the side of Peculiar Rabbit.

And just like that, the Southern Tiger Collective's influence grew stronger.

Originally formed in 2017 by local artists Alex DeLarge and Dustin Moates, the Southern Tiger Collective is a group of local artists whose work has been hard to miss in the city this year. Aside from the now-finished Peculiar Rabbit mural, you can find STC work on the side of Seventh Sin Tattoo Company, Salon 1226, Abari, Pure Intentions Coffee and many other walls throughout the city.

Now, the crew wants to use its growing influence to encourage collaboration in the city's street art scene, starting with the recently announced Talking Walls, Charlotte's first mural festival, planned for October.

When I visit the Southern Tiger Collective studio on North Davidson Street in the Villa Heights neighborhood a few weeks after Wirth finishes his mural, the team is working on pressing hundreds of t-shirts in preparation for an upcoming event they'll be hosting at the space.

DeLarge is holding court with a few of the core members of Southern Tiger Collective: Moates, Wirth, Owl and Arko. He explains that each STC event — like the Ambush! party his team is preparing for now, which will feature live mural painting, food trucks and live music — is designed to lead up to the festival in October, and why he and Wirth decided to organize the festival in the first place.

DeLarge grew up in Pittsburgh, doing art in Philadelphia and other spaces around Pennsylvania. He attended the Art Institute of Pittsburgh before deciding that the academic route was not for him. About six years ago, he moved to Statesville to live with his mother and sister before making his way to Charlotte, where he and Moates have been making waves since.

The two infamously made local headlines and even pseudonymously designed a CL cover as the artists behind the paintings of a mischievous Bart Simpson that were popping up throughout the city and getting under the skin of some local leaders in the summer of 2015.

In February 2017, the duo moved into the space next to their friends at RCB Fashion on North Davidson Street. After using it simply as their personal studio for months, the two eventually began inviting fellow artists to work in the space and, slowly but surely, a collective was born.

DeLarge now runs the collective like an art firm, hiring out muralists, designers or whatever a client needs.

"That goes back to what we are," DeLarge says. "We're just empowering and enabling and educating ourselves and our clients like, 'This is what we're worth and what we'll do.'"

One part of that education involves righting a misperception that many folks have about street art: that it's the same as graffiti. Although a few members of the collective have graffiti backgrounds and some still write graffiti from time to time, most agree that the general population's tendency to lump it together with street art hurts the arts scene as a whole.

"It might not be simple to some people, but to me it's simple. Graffiti is people's names — that's what you're seeing. Graffiti is about the process, it's about doing. It's who got up to the craziest spot and did the craziest thing and just killed it the most. It's not about what that shit looked like," DeLarge says, laughing.

"Street art — legal or not, which is a blurry line in itself, but that has more to do with like laws and society than the artist — to me is about characters; cartoons and faces and stuff like that. It's more illustrative. It's not the alphabet. On paper it would be the difference between a comic book artist and a guy who does typography. Two different skill sets."

However, as non-artists have become more aware of the differences between graffiti and street art, it's created a troubling dynamic across the country. While graffiti has long been seen as an eyesore that negatively affects property values and serves as the sign of a "bad neighborhood," street art is more often being seen today as part of a beautification process, which then becomes a harbinger of gentrification.

"That broken window theory, it's already going to the other side," DeLarge says. "Now it's the spearhead of gentrification, because an artist moves into a low-level community, beautifies it, Starbucks moves in, and they can't even live there anymore, and neither can the people who did before. That's why there has to be intent to what we're doing as street artists and graffiti artists, because you beautify a city and there's repercussions to that."

While DeLarge can't solve the larger issues surrounding gentrification, he believes that art done with intent can help represent communities rather than displace them. He encourages STC artists to take control of the pieces they're commissioned to do.

"Know what you're doing, for who and why — what your intent is behind it," DeLarge says. "To me that goes back to allowing people to do what they're good at. Instead of painting that branded mural with just a logo or something that looks like some sort of company ad, next time a company approaches you to do something for them, say, 'Instead of branding the hell out of this and telling me what to do, let me do what I'm good at.' That empowers artists, and not only that it helps the people around us."

The crew's "intent" also goes beyond commissioned art. In the aftermath of the Charlotte Uprising in September 2016, before the collective had even come together, Wirth, Arko and Owl joined other local artists in painting artwork on the boards that covered the shattered windows of the Hyatt Hotel. At that same time, a piece that Wirth designed replacing the gem in the Queen City crown with a fist went viral on social media and served as the inspiration for a now-popular shirt design.

Wirth, whose 18-year-old cousin Meadow Pollack was killed in the Marjory Stoneman Douglas High School shooting in Parkland, Florida, in February, says he'd like to do more art around social justice.

For all the talk of artist empowerment and running the collective like a business, the true reason STC exists is to cultivate talent within the Charlotte arts scene, and the crew is not above working for free when it's for a good cause.

On an early June evening, a few members of Southern Tiger Collective come together at the McGill Rose Garden for a night of charitable live painting. At the event, Wirth and Owl join reputable local artists Sloane Siobhan, Dammit Wesley and Georgie Nakima to paint on canvas live while attendees look on. Before the end of the night, they'll sell their respective pieces in a silent auction and give 100 percent of the proceeds to Brand the Moth, a local nonprofit that creates community arts projects and gives opportunities to up-and-coming artists.

The event is the perfect chance for STC artists to support a scene that they've helped build momentum for over the last year.

"We want to see younger artists come up," says Wirth while he works on a painting of his friend Jen lying down in front of a sunset-colored, Van Gogh-esque background. "We want to set the stage for the future, and so do [Brand the Moth]. I think what they do by finding artists who are at that right moment to start their first mural, it's huge. That's that break that makes a difference. And if we could just get more painters in the city, that means more styles, that means more opportunities, it's just going to grow. Helping young folks who are up and coming and doing that collective tide rise, I think that's the mentality we share."

As Owl works on a more abstract design next to Wirth, she explains why the event is a good example of why she got involved with Southern Tiger Collective in the first place.

"The reason why we're part of a collective is to build a culture, and this is part of that culture," she says. "Even though this is not our event, we support 100 percent everybody that wants to do something different in the city."

As DeLarge says, everything Southern Tiger Collective does is leading to something bigger, and the culture building mission Owl speaks of will culminate in October with Talking Walls, at which 15 artists — five local, five regional and five international — will be creating works on walls across the Uptown, NoDa and Plaza Midwood areas. DeLarge says he hopes to build a tradition around the festival, and host an even bigger one next year.

Speaking with each member of the collective, it's clear that they're all excited to see Charlotte's visual arts scene come out of the galleries and spill onto the street. Each artist is quick to express their pleasure at seeing new murals pop up all across town, and their optimism at the potential for the local street art scene.

"It will only get 10 times stronger, hopefully by the end of this year," says Moates. "We want to put the city on a whole different level. It's really turning a page right now, and it's cool being, like, people that are influencing that."

For Owl, a Colombia native who moved to Charlotte from the street art-friendly Atlanta eight years ago, the momentum is building, and she's ready to keep pushing in support of the scene.

"I feel like we've helped set that fire a lot bigger. It was there and starting off, but there was still a lack of something," she says. "I think it's starting to peak now and these guys just came right at the right time where people are just wanting more out of Charlotte."

And more is what they shall get.