On Monday, February 27, six local chefs and two mixologists will present an upscale, eight-course dinner in one of the Queen City's top-tier restaurants.

Nothing unusual there. Charlotte hosts dinner events like this almost every week. But there is one key difference in this night of swanky indulgence: the folks behind the elevated cuisine and cocktails are all African-American.

If great food is great food, why does it matter who's cooking it? According to Chef Gregory Collier, it matters in the kitchen.

"When you're a majority, it's not really necessary to find a group of people who look like you, share experiences with you, to do stuff together," Collier says. "The last one, it felt good because I had never been in a space where I cooked with all chefs that looked like me."

In case you missed it, "the last one" was the inaugural Soul Food Session held in October at Collier's @Dawn Café — coincidentally, it directly followed the uprising over the shooting of Keith Lamont Scott that brought Charlotte national attention. I say coincidentally because Collier, Mike Bowling of Southminster retirement community and Jamie Barnes of What the Fries? food truck already had plans in motion to bring attention to the small but growing cohort of minority chefs in the city.

"Once he started doing What the Fries?, Jamie kind of got the idea, 'Everybody thinks all we can do is fries,'" says Bowling, who trained at Johnson & Wales University in Charleston, South Carolina, and has cooked at the famed James Beard House in New York City. "We're classically trained, let's do something else...to kind of show people that there's a skill set there that you might not think of." 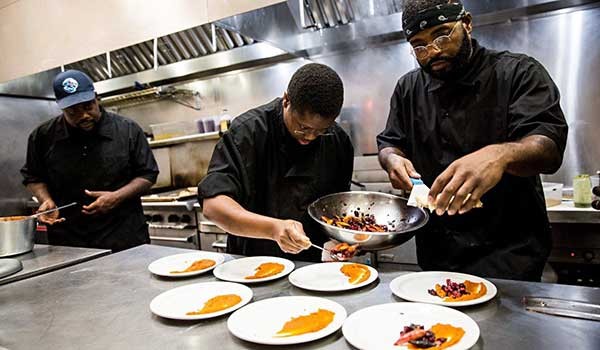 Two female chefs, Sam Dotse of Passion8 and Jamie Suddoth of Jamie's Cakes and Classes, rounded out the team for the first Soul Food Session. That dinner tweaked the very notion of soul food, using familiar ingredients and flavor profiles in elevated methods. Sweet potatoes, Bradford watermelons and molasses were puréed as an anchor for crispy fried rock fish; the chicken came as a Moroccan-style tagine.

For the larger menu to be presented at Passion8 in the Elizabeth neighborhood, the same chefs cast their nets wider across the globe in a celebration of the African Diaspora. The dishes pull in inspiration from multiple regions of Africa — including Dotse's native Ghana — but also include hits from the Caribbean and South America. That net also hauls in two Uptown mixologists whose concoctions evince as much deliberation as anything on a plate.

Justin Hazelton of 5Church and DiSean Burns of Stoke will present three cocktails before and during the dinner. Still in their planning stages, the pair describe drinks involving Brazilian cachaça, demerara sugar from the Caribbean, bitters from Trinidad and even a simple syrup made from Senegalese acacia-tree gum, spiked with fruits from those same regions. "That's speaking to the different cultures," explains Burns. "The many people of color that originated in Africa, that now find themselves in different places."

As he listens to Burns talk about their own creative approach, Collier can't help but exclaim, "I didn't even expect the level that they have come to with cocktails! I didn't expect the same story. . . for them to get there just like we [chefs] got there."

While the team strives to tell a global story through the flavors on plates and in glasses, their overarching focus remains here in Charlotte. First, they hope to foster other African-American professionals in their industry by raising their own visibility. They also are donating proceeds to local charities; the first event's went to the Community Culinary School of Charlotte, this one to Charlotte's Sickle Cell Foundation.

In the next two years, the chefs plan to establish a foundation hosting quarterly events to fund minority scholarships at Charlotte's various culinary programs, with an eye to spreading the program to other regional cities.

In the meantime, these culinary artists hope to start breaking down preconceptions of what African-Americans are creating in the city's kitchens. As Collier says, "The question of 'Why all black chefs?' should disappear by 2019. The question of 'why' has got to go out the door soon."