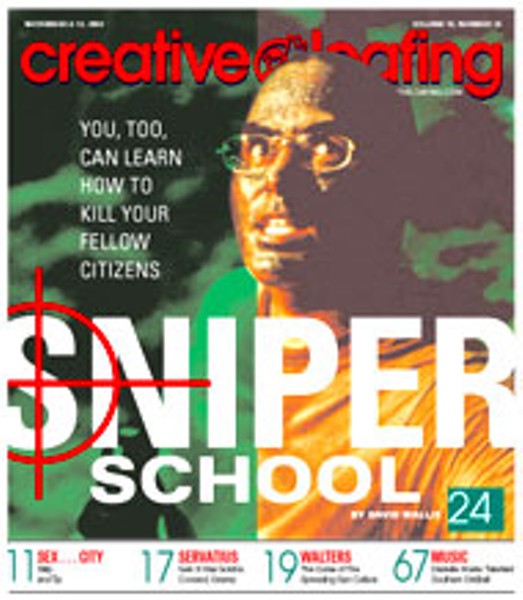 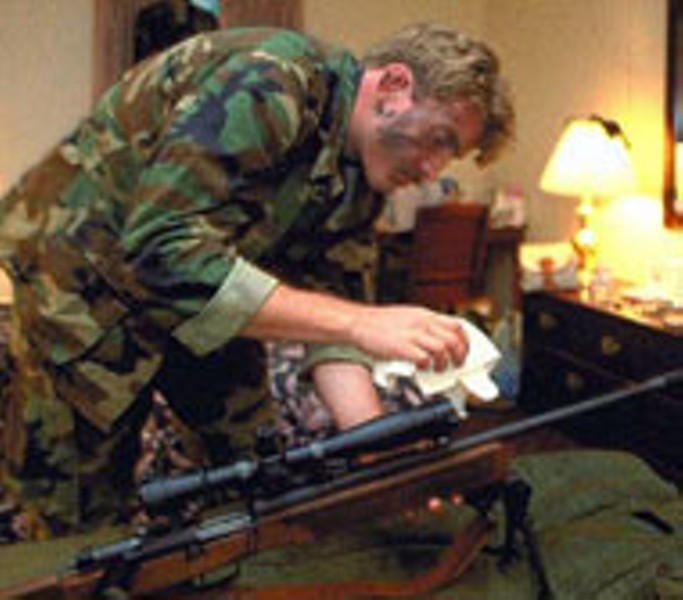 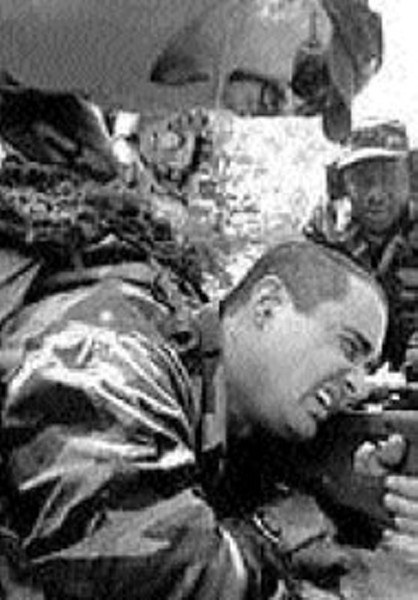 Piet van Lier
Tom Fitzpatrick, a burly, tattooed ex-Marine who still wears his hair "high and tight," had long regretted not qualifying for the Corps' elite sniper unit. The program, which trains soldiers to fire a bullet into an enemy's brain from more than a mile away, discriminates against smokers like Fitzpatrick. Instead, the military taught him to install telephones.

But several years later, Fitzpatrick, now a telephone repairman in Omaha, Nebraska, found a way to unlock his inner killer. He enrolled in "Basic Counter Sniper," a five-day course on deadly force offered by the Storm Mountain Training Center.

Getting into this Andover for assassins in Elk Garden, West Virginia -- just a few hours drive from the stalking ground of alleged Beltway sniper John Allen Muhammad -- posed no problem for Fitzpatrick. He paid tuition of $495 (recently raised to $695, not including ammo) and furnished Storm Mountain with a background check and a reference letter from his minister (who happens to be his wife's best friend). Then he and a buddy from work piled their guns and gear into a rented Dodge Durango and drove 1,100 miles in 17 hours to Storm Mountain's cloistered 208-acre compound in the Allegheny Mountains. To learn how to shoot people from a distance.

Meanwhile, Detective Brian Vice of the Moss Point, Mississippi, Police Department faced greater obstacles before he could join the ranks of would-be snipers. The mayor of Moss Point rejected Vice's request for a scholarship, judging the five-day course an extravagance. But Vice, 32, who looks like a young Rhett Butler, stuck to his guns, appealing to the town's aldermen. A stirring speaker when he suppresses his natural smirk, Vice argued that Moss Point, facing increased violent crime, desperately needed a trained sharpshooter and already had the tuition money in a police education fund. The aldermen overrode the mayor, voting unanimously to subsidize Vice's lethal studies.

In a country where the right to bear arms is enshrined in the Constitution, where the National Rifle Association cows legislators into voting against common-sense gun control laws designed to keep children from accidentally shooting other children, learning to kill with long-range rifles is considered not only a useful skill for law enforcement officers but a legitimate leisure time activity. The privately operated Storm Mountain Training Center confers what amounts to an advanced degree in high-tech mayhem on gun lovers.

Sniper schools, most of which claim they only train law enforcement officers, are receiving new attention in light of the recent sniper shootings in the Washington, DC, area. Investigators, including the FBI, have been looking into reports that alleged sniper John Muhammad trained at a sniper school complex near Marion, Alabama, called "Ground Zero USA." US federal investigators and Scotland Yard suspect this same camp of having been used by Islamic militants for terrorism training. The West Virginia sniper school in this story is similar in scope (no pun intended), although the owners readily admit that they teach ordinary citizens as well as law enforcement officers.

On a rainy Monday morning, Fitzpatrick, Vice and five other warrior wannabes gathered in Storm Mountain's classroom for orientation. The fluorescent-lit basement smelled like mothballs, the result of a leak that soaked a swath of beige carpeting. The paneled walls were hung with assorted plaques, photos of war games and a framed calligraphy copy of the sniper creed. One stanza read: "This is our rifle . . . This rifle is our best friend. It is our life."

While many Americans profess a fondness for firearms, treating their guns like family dogs, snipers tend to humanize, even romanticize, their rifles. They buy presents for their guns, a fancy scope, a new stock, a leather carrying case. They clean them nightly, and lovingly polish the parts. Beneath an outwardly disciplined, just-following-orders demeanor, their passion for the kill is revealed in poems like Robert W. Baird's "Sniper's Serenity" on the online forum Snipercountry.com.

Get them now, kill them clean,

before they can hurt another Marine.

The first dies quick, the second has looked, that one dies fast, a third has booked.

Number Three goes down, sight on Number Four, this one's for my Brothers, Brothers of the Corps.

Even now at home, I remember that scene,

the four of them and a young Marine,

I would do it again, once more with pride,

to protect my Marines, the enemy has died.

"Being able to send a projectile down range and knowing that I can hit what I'm aiming at consistently is an art. . .a way to express myself," explained Danny Basso, a Storm Mountain graduate who now volunteers as an assistant instructor when not running his landscaping business. Lounging in the back of the classroom, wearing camouflage pants and a hunter green T-shirt that reads: "SILENT SOULS INFLICT 308 HOLES," Basso estimated that he's returned to the sniper school 10 times. "Most of the guys into [sniping]," he said, "are ex-military who miss the camaraderie and being around people who have the same pride as themselves."