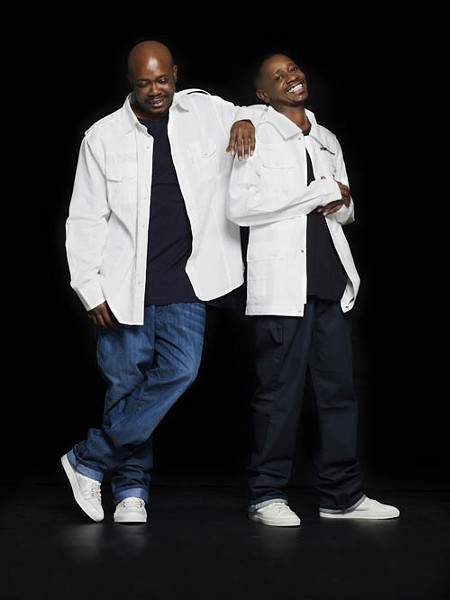 We grow to love these groups whose music becomes the soundtracks to our lives. Then for reasons that are either never fully explained or we're not willing to accept, they disband. From The Beatles to the Fugees, millions of fans have been left reeling in the wake of their premature departures from making music.

And there's this one particular group that, if we would've had it our way, would just "Stay." Their music left many "Feenin.'" And because you don't really know what happened to them, if you had the chance to meet them, you'd say "Come and Talk to Me."

If you haven't figured out by now, the aforementioned references are titles of classic songs by Jodeci, the trendsetting, chart-topping R&B group whose sound defined an entire genre of music and culture in the 1990s. Comprised of two sets of brothers — Donald "DeVante Swing" DeGrate and Dalvin "Mr. Dalvin" DeGrate from Hampton, Va.; and Cedric "K-Ci" Hailey and Joel "Jo-Jo" Hailey from Monroe, N.C. — Jodeci released three albums from 1991 to 1995, each going double-platinum or higher. And to their music, a lot of proms were danced and a lot of babies born.

Then the Hailey brothers went on a run of their own. They teamed up with 2Pac in 1996 for the No. 1 single, "How Do U Want It," and the following year released the multi-platinum selling album Love Always, which featured the biggest song of their careers as a duo, "All My Life."

And while K-Ci and JoJo, who have called Charlotte home, have released several albums as a team, the last few years have been marred by rumors and allegations of drug and alcohol abuse. That speculation skyrocketed two years ago when a video went viral, showing them performing a concert in Sydney, Australia and JoJo passing out on stage.

Now, K-Ci and JoJo, ages 41 and 39, respectively, attempt to put rumors to rest with K-Ci & JoJo ... Come Clean, their new reality TV show premiering Oct. 19 on TV One. The network describes the nine-episode "docu-series" by stating: "Each day they learn to come to terms with the ever-present temptations that go hand-in-hand with their fame and fortune. By any means necessary, K-Ci & JoJo are determined to reclaim their honor and respect in the music game. The only thing more important than regaining their celebrity status is the preservation of their own lives. From their outpatient rehab, to emotional therapy sessions, to the North Carolina roots where their musical lives began, every aspect of their lives is examined and explored."

A couple of weeks before the series premiere, we talked to K-Ci and JoJo to find out more about the show and to ask some of the questions their fans have been wanting answers to.

Creative Loafing: What can we look forward to from your reality show?

JoJo: It's us pretty much just sharing our lives, because there's been a lot of hearsay. This show is just letting everybody know how it really is. You don't have to hear it from nobody else or read it on Twitter. We're just being ourselves, and we hope and pray everybody will just take it as that. We're coming clean about all the rumors. We're putting an end to all those rumors and things that were stamped on us. We're cleaning it all up.

What is it going to take for Jodeci to get back together and start making music again?

K-Ci: With Jodeci, we made a vow that we're always going to be a group; we're always going to be brothers. But right now, we're focusing on this K-Ci and JoJo thing because we got some soul-searching to do. All four of us have some soul-searching to do. We are planning another Jodeci — we don't want to say reunion because we never broke up — but it's going to be out there. We want to thank everybody for supporting Jodeci. We're not going to let them down like that. But right now we're concentrating on K-Ci and JoJo. But I will let Dalvin and DeVante know that [the fans] still love us.

What can we expect from K-Ci and JoJo?

K-Ci: New album, touring, TV appearances — it's all over again, right where we left off at. But this time, we're more focused.

What's your opinion on the music that's being produced today?

JoJo: I think all music is beautiful. But I think on radio we're missing real, wholesome, urban music. It's out there now, but it takes a lot to hear it. Not to pat myself, or me and my brother, or Jodeci on our shoulders, but you don't find groups out there anymore like Jodeci and Boyz II Men. I think the only groups that came close to keeping the style out there that we were doing are Jagged Edge and Silk, but you don't hear those guys anymore. I love rap, but every time I turn on the radio all I hear is rap. What happened to that R&B that was around when we were around? So I think that's one of the reasons we want to get back out there.

What's important to putting together a successful album this time around?

JoJo: Right songwriters, right producers, and, plus, we gotta make sure our heads are straight. We gotta be focused on ourselves. We know a good song when we hear one.

Looking back on your career, what would you do differently?

K-Ci: I would've been wiser in my decisions. I knew I could sing, but I wouldn't have been as cocky as I was during those years. A person who inspired me [recently] is Charlie Wilson. People thought he was washed up, but then he came back out. It let me know that, "OK, Uncle Charlie is still around."

How often are you back home in North Carolina?

K-Ci: We try to be home as much as we can — holidays, family reunions, and stuff like that. Don't get it twisted: We love home and this is where it all started at, but I'd rather be on a tour bus going somewhere to sing.

When are all the notable R&B artists, who are either from Charlotte or live here, going to get together and do something?

K-Ci: We would love to do a show with Fantasia, Anthony Hamilton, Calvin Richardson. I hope it can be soon. We always talk about how we would do something like that for Charlotte. JoJo agreed to it. I agreed to it. Calvin agreed to it. And Fantasia agreed to it. We haven't really had the chance to talk to Anthony about that, but we're pretty sure he'd get on the bandwagon as well. So, it could happen. And we hope it does.

And so, we asked Hamilton (and he said not to forget about Sunshine Anderson and Horace Brown in this potential super-Charlotte collaboration).

For more details on the reality show, including a video sneak peek, visit kciandjojo.tvoneonline.com.