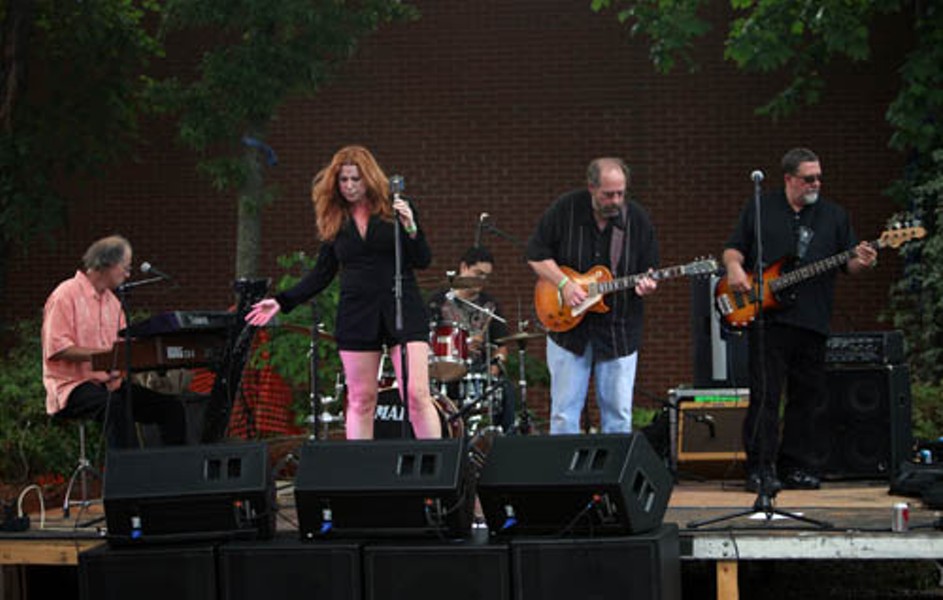 GET OUTDOORS: The Jill Dineen Band performs during Femme Fest outside of Salvador Deli in 2010.

The idea of sitting outside on a warm spring evening with nothing in the air but the sound of crickets chirping is a dream to some Charlotte-area residents — but a complete nightmare to the local music scene. Nearly everyone craves moments of peace and quiet, but proposed changes to the city's 25-year-old noise ordinance would blanket the scene with an edict unplugging amplified music in all but the Uptown area.

It's not that the Charlotte City Council, attorneys or those on the Community Safety Committee are directly targeting the music scene or local bars and restaurants in general, but the initial proposal would put a dagger into the heart of the city's vibrant music landscape, which is just starting to find new life.

While the committee and attorneys are working to find a balance between bustling businesses and residential areas, people close to the music — musicians, bar and restaurant owners and music fans — worry a revised noise ordinance could eliminate a portion of the local arts scene that is thriving and drawing in new fans every day.

Right now, the city of Charlotte operates under a noise ordinance that was created roughly 25 years ago — a quieter time in the city's past. The law currently states that outdoor amplified sound can't exceed 70 dB as measured anywhere within the boundary line of the nearest residentially occupied property. The problem with enforcing the existing rule comes from a limited number of decibel meters that are accessible to Charlotte police and the fact that outdoor noise in an urban area usually exceeds that level with traffic alone. Average city traffic is 60 dB and heavy traffic can go up to 90 dB or more.

Another portion of the current ordinance allows for 10 hours of live outdoor amplified music for an audience of less than 1,000 people per year and 20 hours for more than 1,000 people. This applies to places such as Dixie's Tavern in Uptown or outdoor events such as Stonefest at the Philosopher's Stone Tavern in Elizabeth. This does not apply to the large outdoor music facilities such as Verizon Wireless Amphitheatre, Symphony Park and Road Runner Mobile Amphitheatre, which have a capacity of more than 5,000.

While there are proposed noise ordinance changes that would impact everything from right-of-way street preachers and protesters to the large amphitheaters, no issue sparks more controversy or opposition than that of the section impacting bars and restaurants near residential neighborhoods. "In those other areas, we think we're in pretty good shape," senior deputy city attorney Bob Hagemann said.

With bars and restaurants, city officials say it's often a game of "cat and mouse." A noise problem is reported to the police, who make their way to the location and ask the volume to be turned down. Owners comply ... until the police have left and the sound goes back up. After receiving an increasing number of complaints in recent years, City Council member Patsy Kinsey brought the idea of revising and updating the noise ordinance to the City Council roughly one year ago.

The Council asked the Community Safety Committee to look at it further — they received the first draft of proposed changes at its February meeting last month. "Kinsey has really been the driver behind this whole thing with City Council," Community Safety Committee chairman and Mayor Pro Tem Patrick Cannon said by phone. "Philosopher's Stone is at the center of this whole debate. It's said that they've been ignoring the ordinance as it is, so the matter has come to my committee." Kinsey did not return multiple phone calls or e-mails for comment.

City attorney Mac McCarley said his office was trying to strike a balance between the residential areas and the businesses in the draft of the revised ordinance. "We are looking to fairly balance competing interests," McCarley said at the February meeting of the Community Safety Committee. "In the Uptown area where there is conflict, we favored for the commercial businesses. In the neighborhoods, we decided toward the neighbors." He said the city is looking at moving away from decibel measurements and toward a calendar or time standard that would make it more enforceable. "Our goal is to make it better, but it's not perfect," he said.

• No live outdoor amplified music would be allowed at restaurants or bars that are located within 400 feet of residential zoning.

• Non-live amplified noise may not be audible within residential zoning regardless of distance.

• Businesses within 1,000 feet of residential zoning would be allowed 15 hours per year of live outdoor amplified music.

• Venues of more than 5,000 would obtain an annual permit that would be tailored to the facility and its surroundings.

Within moments of the proposed changes being explained to the committee in February, a variety of voices could be heard expressing concerns. Committee member Andy Dulin noted that the proposal was "very restrictive" and that 15 hours wouldn't cover a 16-game football season if someone had a band at halftime of each game. Bar and restaurant owners expressed some anger and concern for what it could mean.